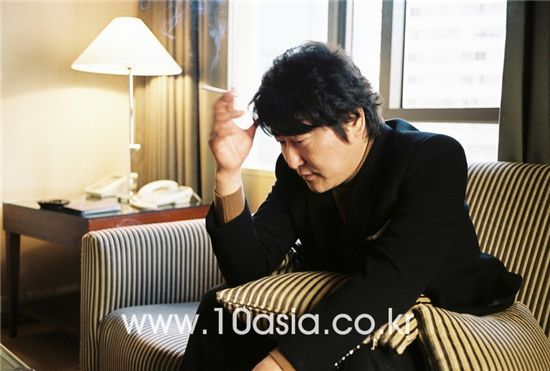 Beck: That's actually what I wanted to ask you. Do you think it's possible to become an artist, or an actor, by pure effort and no natural talent?
Song: The concept behind the word 'effort' is a bit vague. There is no such thing as putting in an effort to act well. Effort could be another word for your determination to work hard but not the secret to good acting. If you are shooting an action scene, you can make effort at improving on your physique and working better with your co-stars. And I put in an effort to play the recorder in "Thirst". But I don't think one can act based solely on effort. 90 percent of it comes from natural talent and 10 percent from experience. The experience that you gain from countless acting roles.

Beck:You've already been an actor for very long -- ten years since the public recognized you as 'actor Song Kang-ho' and even much longer counting your career in theater. Don't you go through a slump or have less fun having to repeat the same job over and over again?
Song:I do get a little tired of the repetitive work I have to do leading up to the opening of a movie -- the post-production after filming, promotion, interviews, stage greetings -- which I have done for over ten years. But it's the nature of this profession so I can't help it. The only counterbalance to that is to find a new story, one which will stimulate my instincts as an actor. I think that's the only source of vitality in this repetitive life.

Beck:A film like "Thirst" for example?
Song:Yes. "Thirst" was recently the most stimulating film. It provided a stimulant, like a new challenge as an artist. I think an actor has no choice but to endlessly pursue such stimulants.

Beck:So fortunately, you have continuously shot various films with many different directors and actors but didn't have any huge slumps you remember of?
Song:Yes... um... I haven't had a slump compared to others. Even when my movies weren't big hits, they didn't cause any huge losses either. Um... but if I had to pick a period, I would say 2005. That is when the film "Antarctic Journal" flopped on the box office and I was in conflict with director Kang Woo-seok. In addition, I got caught drunk-driving at the end of the year and made the nine o'clock news on all three public networks. That year, a bad thing happened every quarter and I was thirty-nine at the time, so I even started to wonder if this was the so-called "bad luck of the nines". So after I finished shooting "The Host", I went to Canada with my family, our first trip ever, and didn't do anything for about a month. But by slump, if you mean things not working out professionally, then fortunately I don't think I've been in instances where the film was difficult to shoot or it didn't work out.

Beck:How do you see yourself as the aging actor Song Kang-ho?
Song:There isn't a certain definition or image I want to show to the public. I would rather age very quietly. I'm older now and senior actor, so I should gradually step back from the spotlight.

Beck:Do you think that you have to step back?
Song:Actually, I don't think 'stepping back' would be an appropriate expression, but I think it is in the law of nature for people's position to change. I'm older so I'll find and play the characters that fit my age. That's how it is for Choi Min-sik, for Sol Kyung-gu and myself. Someday, the younger actors will naturally take over the spotlight and, in time, those juniors will have to yield that place to their juniors too. I think it's right to just accept things the way they are.

Beck: In my book, I previously wrote that Song Kang-ho is "a long-distance runner who is running toward the freezing point" and I still believe that about you. You were at your boiling point when you first appeared as Jo-pil in "No. 3" but have gotten colder since, an actor who was the most instinctive yet grows increasingly intellectual.
Song:I don't think it's in my nature to be warm and cozy and have a happy-ending sentimentality. I am the type of person who is attracted more to colder and cooler things. I don't think my acting has ever been loud or heated. Even with films like "No. 3" and "Memories of Murder", I personally believe that I acted very rationally and coldly in them.

Beck:There was a time when you were booked for films for three to four years in a row, as if you were running a relay race without taking a break. I think you must feel a bit more comfortable watching films now.
Song:I don't think I'm truly free in that respect even now. "Hindsight" starts shooting in April or May, so I guess that is it for this year. I can't reveal my plans for next year, ahahaha, but there is another one I'll be working on and there might be another one in between.

Beck:... Don't you ever rest?
Song:Hey, I am on a break. Doing an interview like this is a break for me.

Beck:You still don't have anything special going on in your life except acting. (laugh) Don't you want to learn something new?
Song:No, I've never had a desire to learn. I am very lazy so I can't be bothered.

Beck:What a relief that you have a profession. (laugh) What would you have done if you hadn't become an actor?
Song:If I had some other job other than acting... I would have just probably kept doing that, without thinking about anything else.

Beck: What other profession do you think you would have had?
Song: If I had not become an actor.. um.. um.. a manager of an actor? Hahahahaha.

"[INTERVIEW] Actor Song Kang-ho - Part 3"
by HanCinema is licensed under a Creative Commons Attribution-Share Alike 3.0 Unported License.
Based on a work from this source