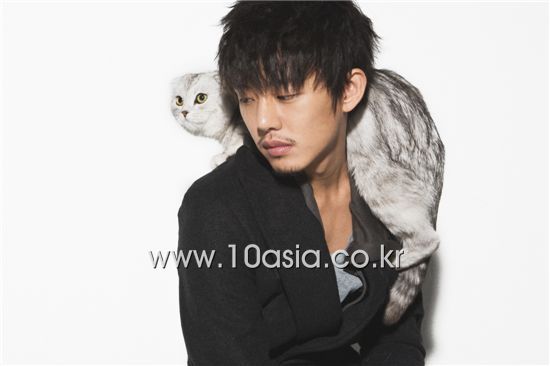 10: What do you think you were like before you started acting? About ten years ago?
Yoo Ah-in: I think I was similar to who I am now. I was the ordinary loser who blended in well amongst the other 40 to 50 students in my class but when I delve into more detailed memories and proofs of who I was in my past, it makes me think that people's nature does not change easily. (laugh) I once came across something I wrote for evaluation during ethics class when I was around 14. I had written about how I would achieve my dream but it wasn't about 'what' I would become. "I think it is people's job to find true happiness", is what I wrote. I think it was because that's all I needed to think about back then. And school was a much smaller and stable form of society than society actually is. Not that I liked school that much either. (laugh)

10: What did you not like about it so much?
Yoo Ah-in: Because a lot of things about it was unnatural. I had never opted for any of the things that happened to me but they just happened as if they were natural occurences. Of course, education is mandatory which is why my mother sent me to school and I would have been in big trouble if she hadn't. (laugh) But I don't think schools teach you how to think. It's a thought that comes to me when I'm writing as well. I write mainly for myself on my Cyworld account and to communicate with others through my Twitter account but it's not because I need answers. And even if I was seeking for an answer, I don't think you should expect to find it easily. I wish people would not say, "This is difficult. I don't know what this is about. Please explain in a simpler way", after taking a mere glance at what I write. What fun would there be in finding what the answer to something is as soon as you look at it? Words are easy to written down and be shared but not light. So if you are someone who visits my accounts because you are interested in me, I'm hoping you will figure out your answer to what I have said through me rather than find it easily and make conclusions about me. I am the most important person to everyone.

10: Then do you think you haven't strayed too far from what you wanted to be like in the future when you were 14?
Yoo Ah-in: (laugh) Yes. Regardless of what I'm doing, I do think I've managed to maintain some of what I felt at the bottom of my heart back then so I'm extremely satisfied. And by satisfied, I'm not saying that I have more and am richer but that I'm not ashamed because I have managed to uphold the roots to what is at the bottom of my heart. I would be embarrassed if that was empty ten years later even if I may become rich throughout Asia and make millions. Of course, when I say this, the response is, "Bottom of your heart? Talk again, after you make millions!" (laugh)