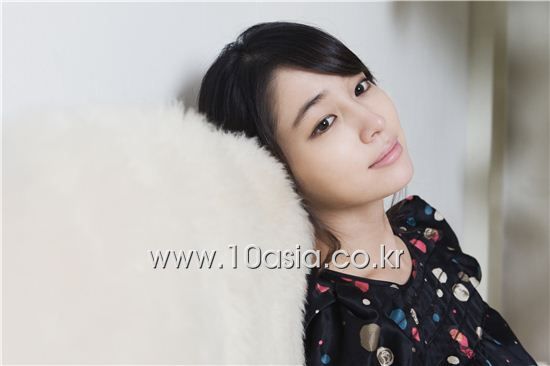 10: But aren't you able to use what you watched back then in your acting now?
Lee Min-jung: An actor can't experience everything so I think it's a positive thing to see what you've imagined through books in more detail. It's the same with watching other people's acting or a theater performance. So I tended to put in an effort to do as a large variety of this as possible. In middle school, I liked to listen to music so saving up the allowance my mom gives me to buy one or two CDs was the moment I waited for the most. A lot of the music I heard back then is left in my memory but after becoming able to download music or buy several CDs at once now, I just pass the music I don't like. Before I used to listen to a CD on my CD player until I buy a new album. I think such experiences are good.

10: You talk of such experiences in the past tense. Exactly until which point does that apply retroactively?
Lee Min-jung: Before SBS drama "Smile, Love"? I had some time to see such things before but from then on, I really just went forward and gave it my everything.

10: I can easily understand how you were busy from then on. I just thought that it would come earlier. Right after KBS' "Boys over Flowers".
Lee Min-jung: But "Smile, Love" went into shoot in August of last year and "Boys over Flowers" ended in April. I need at least three months break! If you think that's late, how am I going to take a break at all after this movie. (laugh)

10: Oh, I'm not talking about the time gap. I'm just saying that works like "Searching for the Elephant" and "White Night" are surprising choices.
Lee Min-jung: Ah, there was "White Night". I really haven't rested. "White Night" could have been a bit surprising. My character was re-created from an investigator from the original work.

10: And aside from the fact that "Searching for the Elephant" was rated 19, it was about
Lee Min-jung: It was released late but I actually filmed that before "Boys over Flowers". There were people who said they felt a maniac fun but it was more of a fantasy film than realistic.

10: It was surprising because it came out after "Boys over Flowers".
Lee Min-jung: I think having appeared in a film with a slightly minor code has rather served as the foundation to me shooting commercial films and getting where I am today.

10: So you're saying that it has accumulated within you, like how you watched movies and read books?
Lee Min-jung: You put it in a very nice way. (laugh)

10: Well I get that you're the type that also likes unique dramas or movies and you do not favor a particular genre. But if this movie does well, immediately after the success of "Smile, Love", you may not be able to take on roles in such works anymore.
Lee Min-jung: As of now, I'm foremost thankful that I can appear in a larger range of works. As the many times as I had flopped auditions because of the fact that I was not recognized, I really like how I have a large choice now, and I don't think I should limit myself when it comes to acting or genre selection. I haven't just taken a single path so far -- I've done plays, dramas and movies. I think it'll serve as the foundation to me not become a limited actress even if I may at one point reach the pinnacle of being a well-made actress.

10: When I look at your filmography, I have faith that you will be such an actress. But when you become a star, isn't there a point you reach where you aren't free to act as you want?
Lee Min-jung: I've felt that a lot too. I hadn't known it before but I've become surprised at how important my words have become in things such as the process of casting. For example, I'll be asked what I think of a certain person. And I think that makes my decision-making process more difficult. Having more responsibility and more say isn't always a good thing. It means there will definitely be as much of what I'm limited to do and I think it'll be something I have to solve, face and break by taking on roles. That's the way doing movies won't be scary. So that's what I think but I don't know. I haven't been on that road yet so....

10: But you still want to reach the top?
Lee Min-jung: I do. But this is what I heard from actress Cha Hwa-yeon -- that she went into hiding after she swept all of Korea with "Love and Ambition". She said she suffered from depression putting her soul into her acting because she knew there was nothing more that she could show. Because all there was left was for her to come down from the top. It's good to hit the pinnacle but I've been told a lot that you have to quit after that. Some people are more extreme about it -- they say an artist has to die when he or she hits the pinnacle. And so whenever I hear this, I think to myself 'I'm still a rookie.