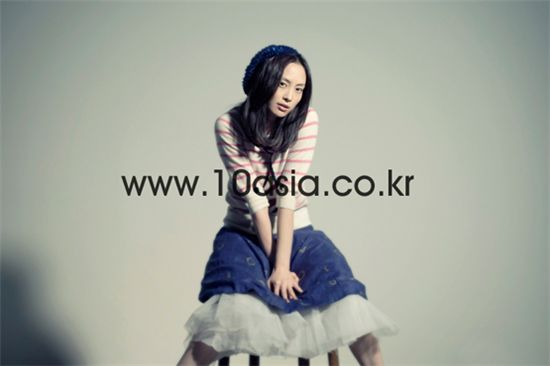 Most actresses which men rave about, are less liked by women. But a handsome number of female fans became enchanted with Lee Na-young's roles in TV series such as "Ruler of Your Own World" and "Ireland". And words such as 'consistency', 'sturdiness' and 'prudence' -- normally used to describe someone of the male gender -- also befit this 31-year-old actress well.

She was the same on the set of film "Lady Daddy". The Lee Na-young that 10Asia met with sighed as she jokingly complained how the female members of the crew would ask for photographs with her when she dressed up as a man in particular, much more so than when she was herself. But it seemed unlike that her image as an actress will be affected after she dons a mustache and short hair to play her character Ji-hyun.

Below is 10Asia's interview with the actress who seeks after what she wants, even if it may be the long way around.

10: I hear that you choose your roles quite carefully so "Lady Daddy" was an surprising choice in many ways.
Lee Na-young (Lee): I made my mind up very quickly for film "Dream" and sitcom "High Kick Through The Roof" but took more time with "Lady Daddy" because many people around me were concerned about it. Before, I had never thought about 'image' in choosing a role but it seemed I should with this film since the topic may influence my image as an actress in Korea. That's why some people were telling me, "As an actress..". but in the end, I decided to think about my character and genre more than my image.

10: So what was the key factor that led you to take on "Lady Daddy"?
Lee: I liked the combination of comedy with the possibly risky topic we are usually careful to talk about. Sex change in particular is something Koreans are not used to and have little information or knowledge about. So I was extremely attracted to the collaboration of the topic and genre, and another thing was that I wanted to play the role of a man. I was very shocked upon seeing Kate Blanchett's acting in the film "I'm Not There". I had never thought I'd be able to play the role of a guy but also started wondering whether such an opportunity would arise in our country too. That's why, when I got the scenario for this film, I was worried about it. But I also told myself that it was unlikely I'd be given the chance to play this sort of a role again. That's why for me, what was important was 'being a guy' and not dressing up as one, whether it be as the person from his past or as a dad.

10: Then is the Ji-hyun you played from his college days an homage to Kate Blanchett from "I'm Not There"?
Lee: Yes, because I had really wanted to try playing the role. That's why my hair was actually more curly when I was in filming than it is now. And I wore a lot of British style clothes like v-neck sweaters. It's weird but I tend to copy guys a lot. (laugh)

10: How was it playing Ji-hyun from when he was a male versus a female?
Lee: It was the same throughout the film. What was most difficult for me from the very beginning was fighting against the stereotypes that I have. My character wanted to be a girl so she should seem more feminine as a guy, she should act more cute in front of guys after becoming a woman, and there would still be some masculine sides to her when she dresses up as a dad later since its in her genes... These were the thoughts I had but after meeting with people who have undergone sex change, reading books about them and interview they've done, I realized they're all different as all people are. They too are lazy when it comes to make-up, go on diets, worry about meeting guys but it's just difficult to express that into a style that one can notice. There will be people who can't make friends because they are bad at sports and then get hurt after trying too hard, while others just won't because they don't care whether they're bad. That's how different all people are. So when I thought about my character from "Lady Daddy", I figured she would have always been very feminine, even before she became a female. 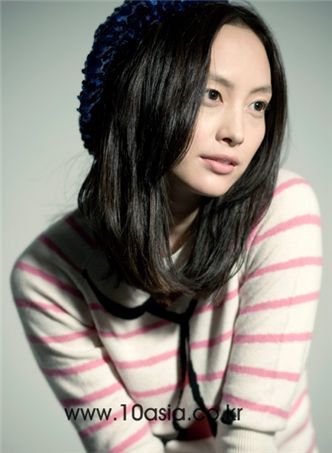 10: I think that's why although you were playing the role of a man, you showed a woman who is trying to act like a man rather than trying to be like a real man.
Lee: I looked at many people's faces after deciding to do this film, thinking how he or she would look as a person of the opposite sex. But it seemed they could still be the opposite gender with the faces they currently have. So although I had considered changing my facial features for when I play a male versus female, I ended up deciding not to since it might look like I tried too hard. Ji-hyun had to act like a man just in front of her son Yoo-bin, not anyone else. I thought that Ji-hyun's idea of a dad probably wouldn't deviate much from the average woman's mind so I couldn't help it even if others think, 'Oh, that's just Lee Na-young'.

10: You've played roles opposite a large variety of actors including Yang Dong-geun, Jeong Jae-young, Gang Dong-won and Joe Odagiri. It must've felt quite different though since it should be said your partner this time was child actor Kim Hee-soo.
Lee: I was a bit nervous because I don't get the chance to meet children often. When we first met to practice our lines, I said hello to him in the honorific form of language. And I did think to myself, 'Anyone who sees this might say I'm crazy', but it was so hard to treat him with complete ease just because of the fact that he's young. I think we worked together pretty well together though because he's just like the character he plays in the movie -- he's very cool and doesn't try to show off his talent like other child actors do. We became very comfortable around each other while shooting the scene where we hang out while I'm dressed up as his dad.

10: Although "Lady Daddy" is a comedy, there are moments where Ji-hyun and Yoo-bin's loneliness or pain surface, one after another. Which of those scenes was most memorable to you?
Lee: I saw that a surprisingly large number of female viewers cried during the movie but I think everyone becomes moved at different points. I had told the director that I don't want to cry when the audience does. 'You should understand my pain. This is how much it hurts. You have to cry with me', is what I had felt with other films but this time, even if I do cry, I didn't want to force it or plea for it. I think the theme of this film, and it's a line I had said even though it got cut, is "I know you don't understand but accept me. I'm happy right now". Ji-hyun isn't asking for understanding but asking not to be pushed aside if the other person can accept her even a bit. That's why for me, I was sad when I saw Ji-hyun's back after she dresses up as a dad and Joon-suh has put on her wig for her. I thought of how horrible it must feel having to wear a short wig and put on a mustache in front of the guy she has fallen in love for the first time and wants to spent the rest of her life with. 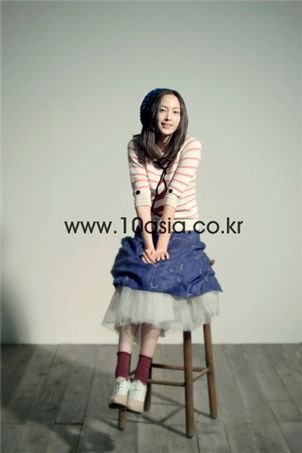 10: "Lady Daddy" is a commercial film but you must have felt some pressure since you're the main character.
Lee: To be honest, up till recently, I hadn't been too concerned about that. And whenever I choose a film, I had always thought it would do well. I had so much fun filming "Dream" too! But it turns out that the movies I work on don't affect the box office immediately but gets response later on. The DVDs for "Someone Special" sell well and "Who Are You - Movie" keeps getting shown on TV. Why couldn't they have gotten response from the very start? (laugh) But I did this film because it was really fun, everyone put in a lot of effort and I put in a lot of love into it so I many people watch it. It's hard to predict how well a film will do though so I want to know what other people think about it, more so because this is a comedy. I was curious about how people saw my acting with "Dream" and "Our Happy Time" but with "Lady Daddy", I want to know whether I worked well with the audience.

10: Making a cameo appearance in "High Kick Through The Roof" was a fun choice, even if it was to promote "Lady Daddy". Actors usually choose to appear in talk shows for promotion. What did you want through "High Kick Through The Roof"?
Lee: Some people might think, "Oh, did she really have to go so far". And some may feel sorry for me having worn a mustache. But making someone laugh can create an affection. I thought I would like it if people would enjoy themselves looking at me, even if I look weird on screen.

10: Well, it's on air right now. Don't you want to watch it?
Lee: No. Because it's embarrassing. Maybe it's because I haven't been on TV for such a long time. No, when I'm working on dramas, I become completely absorbed with my character and act as I please, no matter what others will say. So I'm usually too busy watching my own acting. But it feels like I've been placed on the chopping block with "High Kick Through The Roof".

"[INTERVIEW] Actress Lee Na-young (Part 1)"
by HanCinema is licensed under a Creative Commons Attribution-Share Alike 3.0 Unported License.
Based on a work from this source