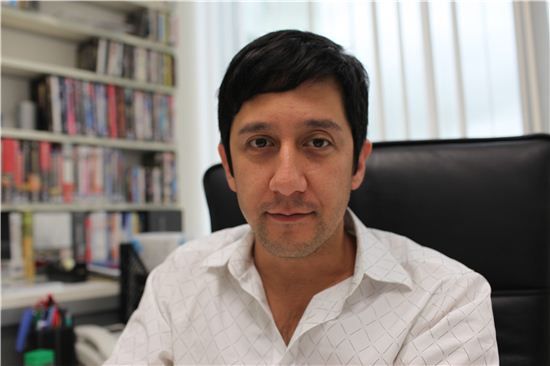 Now, as Managing Director of Avex Asia Limited, Marini is in charge of the company's film business in Asia which invests and co-produces films with Asian filmmakers. One of their most noted productions is John Woo epic "Red Cliff", a co-production between Avex, U.S.-based Lion Rock and China Film Group.

Marini talked to 10Asia about the past, present and future of the Asian film industry during his trip to Korea to attend the Network of Asian Fantastic Films (NAFF) industry program of the 14th Puchon International Fantastic Film Festival (PiFan).

Q: Is your third time to the PiFan, or just NAFF?
A: To NAFF. Unfortunately, I don't get to enjoy watching films at the film festivals themselves because film industry people like myself use these festivals to have meetings with each other. So with the exception of Cannes [Film Festival] where you can stay a little longer and watch some movies, I always have meetings, meetings and more meetings. (laugh)

Q: Is there anything that has caught your eye this time around in particular?
A: Yes. One project was a pitch by Mr. Choi Young-bae, producer of "The Host", who's trying to make a new thriller in China for the Chinese market with a Chinese director. The thriller is something along the lines of "Bourne Identity" for the Chinese market and I think that's going to be very interesting. Chinese filmgoers really want new kinds of movies and genres -- there are so many genre categories that don't exist in China, partly because there are a lot of issues with censorship. I think this project has potential because Korean producers are really good, and he is bringing his talent at producing Korean thrillers into the China market... bringing that to China in a commercial way. Avex currently has two film funds in Hong Kong that target Asia. One is a smaller budget fund, one to two million dollar range for new and upcoming directors in Asia. We've done four films in two years and we want to bring it up to three to four films a year. Avex and Hong Kong producer Bill Kong are each 50-50 partners for this fund and we rely on Bill's distinguished experience as a producer and distributor in Asia, while Avex contributes with the management of the fund and bringing in fresh story ideas, properties, etc. to produce. The other fund we have is with a major Hong Kong studio company--it's a bigger fund for bigger budget movies. These movies are targeted to the Chinese speaking, Japanese and Korean territories. However, we have not produced a film under this fund yet.

Q: What do you usually look for when you come? Co-productions? Investments?
A: I am looking for co-productions, and to a lesser extent investments. Investing in Korean films is difficult as an outsider because it's a competitive business that Koreans are very good at and we are not fooling ourselves that we can get in that game. (laugh) I am looking to work with Korean companies on co-productions, and it helps that the Korean film industry is also very aggressive in going international. I really think the Korean government does such a good job at exposing Korean cinema and talent to the international community. So we're looking to work with the many really good producers in Korea and working with companies like CJ Media and Sidus on projects that can be co-productions. Co-productions have become a very different game than they were five years ago. Back then, everyone was looking at pulling together Asian elements in making co-productions for the entire region which was the strategy for us and many companies. The market at that time was sort of coming together, meaning the major Asian movie market audiences were actively appreciating each other's content. But then the markets sort of started going away from each other, in a direction that people started appreciating their own domestic content more than integrated Asian content. Strategically, we were aiming to take the best elements from each country or territory in order to make something which is even better than sum of their parts. In addition, with added markets to target, you have a bigger budget so you can create a bigger production. But what happened was that the markets started pulling away -- Japanese filmgoers became less interested in Asian content, and the domestic content increased market share. So co-productions for us has now taken on a very different meaning. We must focus on one territory and target the audience of that market and figure how to make money there and succeed there.

Q: And how do you do that? What strategies do you use?
A: There are actually a lot of different things going on in international production. Between Japan and Korea there are a lot of co-productions in television and in music... but I don't think there have been any hits in terms of movies. At Avex, we focus more on content co-productions in, for example, the mobile platform. Avex produces a lot of mobile content which is in short format dramas and short format variety shows. We have created several mobile drama shows featuring Korean talent. On the movie side, we choose our partners carefully while bringing some of our own elements like script development skills, or rights to original content. In Japan, we have a lot of comic books, novels, etc. so we can take that content into Asian territories while working with local producers and directors to make movies specifically for a territory. The strategy has changed. When we did the Chinese co-produced movie "Red Cliff", directed by John Woo, Avex invested half of the budget and it was a big success around Asia and in Japan. But that was the previous model. Where is the next "Red Cliff"? There is no next "Red Cliff". It's really hard to replicate that. So now we've switched our strategy to looking at individual markets.

Q: And you do mostly remakes?
A: Not necessarily. It totally depends on the story and if it fits the market. But we actively look at remakes and adaptations from novels or comic books. There's a lot of opportunity in China, for example, in terms of remakes and adaptations because China's film market is still very young and underdeveloped. The Chinese movie market consists of a new audience that is hungry for new things.

Q: Do you go for a specific genre?
A: We work in several genres and combination of genres. We're looking for stories about love, including romantic comedies and love dramas. This genre is overdeveloped at the moment, but I think there is still a lot to do in this area. We also look at the thriller/detective/crime genre. The key in this genre is getting good plot twists and surprising elements. And even combining it with other genres like comedy. Finally, we are also exploring a genre that is still underdeveloped: coming-of-age movies. This genre skews young, about young kids growing up, but it can also be about older or middle age people growing up as well. Good examples are sports movies, where our hero or heroes reach some kind of realization while playing sports, and experience the effects of heightened competition.

"[INTERVIEW] Avex Asia Managing Dir. Buddy Marini - Part 1"
by HanCinema is licensed under a Creative Commons Attribution-Share Alike 3.0 Unported License.
Based on a work from this source