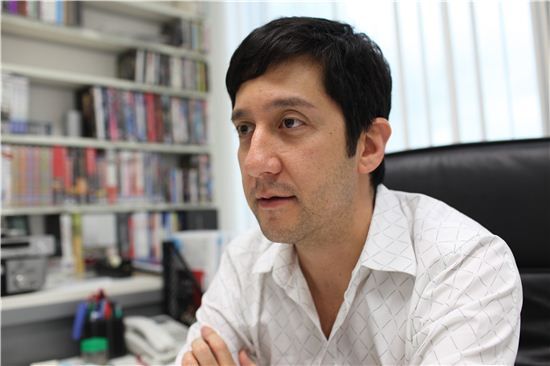 Q: In what ways do you think the NAFF could do better?
A: I would like to see more Korean company participation. I think there's a lot of creative people there such as Korean directors and producers with projects, but I'd like to see more industry people there. And I think programming-wise it's always been very interesting and keeps getting more interesting
so it's good but I'm feeling that maybe this year, perhaps it's because of the industry situation as a whole, I didn't feel it was as dynamic as last year. The first time I came I had fun meeting all these independent directors and producers that I usually don't meet. And last year I thought it was getting bigger in scope. But this year, I felt it wasn't as good as last year because the Korean companies weren't here. Last year, industry people from Seoul made appearances here but many didn't this year. I think the fest needs to, or at least NAFF, they need to incorporate this aspect more. I know they want to keep it independent but if you're getting these people together internationally, they should have the industry people there at least to just mingle, just to get everyone together and talk about these films. They're not totally uninterested in these films either. They're fun. I'm sure there's a way to make them come and I think it would be a much better fest if they do.

Q: What do you think of film fests in Korea in general?
A: I think the Pusan International Film Festival (PIFF) is the best film fest in Asia. Honestly, it hasn't been as great during the few recent years but it's still the best. Hong Kong comes in second, then maybe Tokyo. Part of the reason being just Korean films... they're the best movies in Asia. They may not necessarily be the best selling but I think a lot of people in the industry feel that Korean filmmakers and directors are really the best in Asia -- the most creative, the most skilled. It's really dynamic and professional. And they've really managed to blur the line between independent and commercial successfully. It'll either be an independent film that is commercially huge or a commercial film that has an independent, edgy feel to it and that's due to the directors and actors a bit too. So I believe that has helped PIFF. I also think government support is good, that push is there. And it's just organized really well, they invite the right people. They've made it into a must-be-at place.

Q: How do you think the fest can improve?
A: I don't know but film markets in general, it's been tough because films sell less outside their territory. So everyone is suffering in that respect. Even Cannes is suffering. So it's not just PIFF, it's like that everywhere.

Q: What do you think of Korean movies?
A: They're very original and fresh, and very moving in a lot of ways. It's just the most powerful of all the Asian countries, whatever genre they do. I just don't know why the films don't travel, I wish they would! (laugh) Other entertainment from Korea seems to travel well -- from music to dramas. Korea is the only country whose content travels all across the region like that. I really believe Korea produces the most creative content in Asia and I'm not saying it just because I'm here. (laugh)

Q: Speaking of content, do you believe in the "Hallyu", the so-called "Korean Wave"?
A: It definitely was there. Avex has tracked it very specifically, in Japan, and when you look at the graph it spikes up in the beginning but then takes a huge plunge down. Right now, it's in the process of rebounding and about halfway where it was during its heydays. So I do believe in it because I really do think Korea has the best talent if you look at filmmakers, directors, writers, actors, crew, producers. I think Korea has the best on average. And even with the music producers, musical talent... with all these things, I really think it's the leader in Asia and popular content and I think it'll continue in years to come.

Q: Then what needs to be done for Korean content to stay on that path of recovery?
A: It's all been positive growth if you take the mean. Korea has done a really good job of developing Korean content. One thing is that Korean companies, well not just companies but talent and everyone, needs to show a little more trust in order to develop more long-term relationships and they have been doing better at it recently, very well with it in Japan, but they can do more of it. Part of the reason why sort of the so-called "bubble" burst before is because people had started to pay way too much for it. I understand that for the sales people, it's their job to get the most out of the situation you're in but they kept pushing it until the buyers couldn't keep up anymore.

Q: What form of Korean content is the most popular right now?
A: I think music, and then dramas.

Q: Then why hasn't music travelled?
A: I think it'll happen one day. Somebody will break out in America and start an Asian wave but it'll be limited. I think it'll happen like the Hispanic wave happened in America. Someone will jumpstart it. But it's just that music is a harder medium to travel because it's about what the singer is singing which is so much harder since it has so much to do with the language. But with films, it's about the whole experience -- the way the story is developing and what is going on in the screen.

Q: So is language the main issue that Asian talents have to overcome to make a breakthrough into the U.S.?
A: Language is a big issue. And there has to be the market that's ready to accept them but it's not there yet, it's a demand problem. You don't have enough people who want to see an Asian singer and idolize them. I think it's increasing with all the cool animation they're reading and copying so I think there's more appreciation for Asian culture but the demand's not there. There's also a supply problem too as in not enough acts being good enough.

Q: Since you've been in talent management, which Korean actor or singer do you think has the potential to make in big in the U.S.?
A: Personally, Won Bin, he could do it. His acting and his face, I think has more potential than anyone else for America. But does he speak English? He has to. He has sort of the Harrison Ford look and he can act too.

Q: Then how about movies? Do you think Korean or Asian movies will ever have a presence as strong as Hollywood movies in the U.S.?
A: No, not in our lifetime. (laugh) I think Asia will continue to, as the economy grows, become a much more dominant section of the world, wealthier and economically more powerful and as a result, the entertainment will be at a high quality level. And I think there'll always be the interest in Asia that exists in the western world but it'll never become completely mainstream, it'll always be niche. Like with Japanese comics which are huge worldwide but it's hardcore and niche, not mainstream. So in that sense, you'll have much more presence of Asian movies worldwide but I don't think it'll ever become that big. I don't see Asian content becoming the de facto standard because there's just so much difference between western and the asian culture. The influx of the West to East has been steady over the last several hundred years so all that has accumulated to create the avenue for Hollywood to distribute their products.

Q: What is your ultimate goal? What do you want to achieve?
A: To rule the Asian box office (laugh). No, Avex really wants to use its leadership position in Japan in content, to try to use it as leverage to become the biggest entertainment market in Asia, to expand in Asia. That's why we're expanding in Beijing, Taiwan and Hong Kong. And with our current leveraged position, we want to set up partnerships with people we can trust and ultimately create an Asian network of partners we can work with so as Japan's relative economic power gets lessened in the region, we can still grow as a company. My immediate ultimate goal is to develop new directors, to support the next generation of filmmakers which I think is lacking everywhere except Korea.