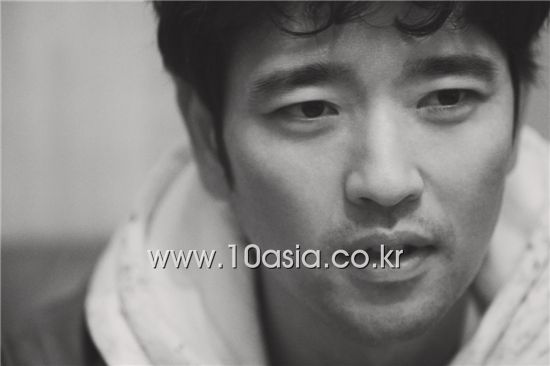 “I used to take on roles that usually evoked unrealistic fantasy,” actor Bae Soo-bin who will star in the 23rd episode of the omnibus TV series KBS Drama Special "Just Say It!” admitted in regards to the parts he played for the past few years. Note that he just said that in the past tense. In the recent KBS single- episode drama “Just Say It!” Bae will play Gi-young, a lazy bum working in a district office, who hates his job and continues to be hung up over his first love of nine years ago. Given the past roles he has played in other dramas, such as the royal guard Cha Cheon-soo in MBC historical drama “Dong Yi" (2010), Park Joon-se in SBS series “Shining Inheritance" (2009), and King Jeong-jo in SBS drama “Painter of the Wind" (2008) where he was flawless physically and mentally, this is quite a change. So how will he pull off a pitiful character like Gi-young and what kind of meaning does this have for Bae? Below is 10Asia's interview with the actor at the set for the show.

10: It's been long since you appeared in a single-episode drama.
Bae Soo-bin: I found the script very interesting. It tugged at my heart in many parts and made me nod with sympathy in others. I decided to take the role as soon as I finished reading it.

10: At first when I read the script I thought you would appear as the handsome and popular Gu-byeong but you played 'the pathetic Gi-young.
Bae Soo-bin: I was attracted to Gi-young. You see, I too have this loser-tendency in me (laugh). Gi-young may not be sharp but there is something friendly and trustworthy about him, the nice guy you may encounter in your neighborhood. His biggest charm is that he is a good guy. The plot builds around how he gets to know his female friend Young-hee (Kim Gyu-ri) and it will be something most people can relate to.

10: During the shoot, you were saying to yourself “Why am I walking like Gi-young?'” Since you played many cool-looking roles in the past and you are already quite handsome yourself, it seems like you will probably have needed to put in extra effort to play the role of a loser.
Bae : I just think of myself when I'm at home, all exhausted. When acting Gi-young I try to bring back that feeling, the desire to just lie back all the day long, doing nothing. It's just that in Gi-young's case, I exaggerate that more, thus making it look comical. The funny thing is after I curled my hair like this, my hair seems to stay that way. I'm also starting to stammer more and even starting to walk down with my shoulders low.

10: I'm sure you have never played a role like this.
Bae Soo-bin: It's my first time. But it's fun. There is catharsis to it.

10: It must be fun doing something new.
Bae Soo-bin: That is the fun of it. But when reading the script I made up my mind on the spot because I really liked the story. There seemed to be a lot I can offer for the role.

10: What part of yourself are you offering in this role?
Bae Soo-bin: Like Gi-young, I too get fed up with my life, don't feel like going out and occasionally miss what's going on around me. Gi-young is more inapt than me in that sense but he also has qualities I can relate to. I plan to become one with Gi-young by reducing on the differences we have one after another.

10: And how has that worked for your role so far?
Bae Soo-bin: After the first shoot I felt Gi-young enter my heart. After filming the part where Gi-young screws up on his badminton match during the sports competition, it struck me that this is basically what the character is like. Since then I've become much comfortable playing the role, to the point I'm interested with even the smallest situations.

10: It seems that such interesting and minor characters can only be seen in single-episode dramas.
Bae Soo-bin: True. After all, isn't single-episode drama a lot like a movie aired on TV? With films you invest a relatively larger amount of money and time but with single-episode dramas, a product with a narrative is created within a shorter time. I think it utilizes the benefits television has in a cinematic way. I actually love single-episode dramas, both watching and acting in them. I made my TV debut in the omnibus drama series MBC Best Theater (1991-2007).

"[INTERVIEW] Bae Soo-bin"
by HanCinema is licensed under a Creative Commons Attribution-Share Alike 3.0 Unported License.
Based on a work from this source