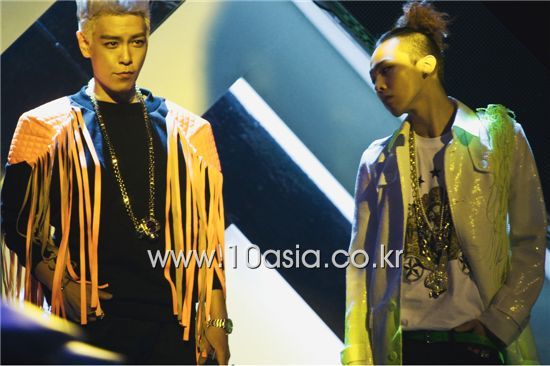 10: But "HIGH HIGH" and "OH YEAH" were not composed by you two although they're the title tracks to your album.
T.O.P (Choi Seung-hyun): When we first started working together, we wanted to do more heartwarming music. But we needed to take the public into consideration to a certain extent and our CEO thought the same as well so we asked Teddy for his help. We set the direction the details to the songs would take but we somewhat needed to go with a style that people are familiar with.
G-Dragon: There actually hadn't been that many of Teddy's songs in Big Bang's albums so far. We always talk about this with Teddy as well but it had been hard to work with him because composers with strong musical tendencies don't work with each other a lot. But we came to realize that we couldn't stay like this so we had talked with him from six months ago and reached a conclusion. (laugh) When we get a song from Teddy, he'll pass a song to us after he comes up with the structure for it. He'll take his hands off of it completely. Then we'll talk again to him again to share our opinions. I think these are the two songs we worked on together properly.

10: That's why "HIGH HIGH" very strongly exudes your style G-Dragon, even though you didn't compose it. It's as if the song changes a level at each new section.
G-Dragon: I think it's because I start the song and when I come in strong, T.O.P (Choi Seung-hyun) will set the grounds for the song and when T.O.P (Choi Seung-hyun) comes in strong, I'll set the ground for the song, which is why the song was fun. We didn't want it to be boring.
T.O.P (Choi Seung-hyun): I think that's the result of our collaboration. We all have different styles so the whole process was about us adding our individual interpretations of the song if Teddy presents us with the basic direction. I think that's why it felt a bit different.

10: But the response for "KNOCK OUT", which you don't promote much and "DON'T LEAVE" which you haven't sung on television at all, have gained response as favorable as that of "HIGH HIGH" or "OH YEAH". It's not easy for songs like "KNOCK OUT" that has no melody and contains only rap, to get such response.
T.O.P (Choi Seung-hyun): To be honest, I didn't think the public would like this song. But at the same time, I also had a hunch that they might. It's true that hip-hop element becomes more prominent when G-Dragon and I work together but we just wanted to do something that can be expressed at our age. While taking a break from our activities as Big Bang, I think hip-hop was the music through which we could express what we have felt and learned instinctively. We could've gone the easy way but we wanted to draw a bigger picture for ourselves.
G-Dragon: We aren't not confident when we release new albums, whether it be Big Bang's or Seungri's. What we're not sure of is the rapid change in music trend. We'll release an album but people will only listen to the title song and forget about the rest of the tracks. In the past, we used to have this nostalgia for music like how old I was at the time and how it comforted me when I was with who. But now everything is decided within three weeks time and most people go "I only remember the chorus of the song". I think we need to make people think of every song in an album as title tracks to catch up with this trend. And in order to do that, the overall flow and the quality of the songs have to be close to perfect.

10: So you're saying that "HIGH HIGH" is not the only title track?
G-Dragon: We wanted to create an album in which some enjoy "HIGH HIGH" and others prefer "BABY GOOD NIGHT". So we didn't put in extra effort into the title track. Of the songs we worked on with Teddy, we decided that the piece that is likely to be embraced by the majority of listeners would be the title track and tried to balance out the album by including other songs with different charms.

10: Apart from "HIGH HIGH" and "OH YEAH", your album seems to have reached out to genres beyond electronica, such as hip-hop or something entirely different.
T.O.P (Choi Seung-hyun) : This is the album that contains most number of music that we wanted to do. Electronica alone sounds too cold and we get tired of that easily. We wanted to put a lot of effort into inserting what we felt throughout our singing career into each and every one of our songs by using new methods.

10: Couldn't you have been more adventurous then? If you had chosen "KNOCK OUT" as the title track, you could have presented a new style to mainstream music.
T.O.P (Choi Seung-hyun): That's what we're disappointed about too. You're allowed to use the term 'knockout' and curse in dramas but that's not quite the case with music. We want to promote "KNOCK OUT" too. (laugh)
G-Dragon: I'm not sure if it's alright to say this (laugh) but I got the idea for "KNOCK OUT" while watching "My Name is Kim Sam-soon" (MBC, 2005). Kim Sun-ah keeps repeating "It completely knocks me out, it's a knockout". I started composing the song based on that idea but the screening committee will not give it the green light. (laugh) 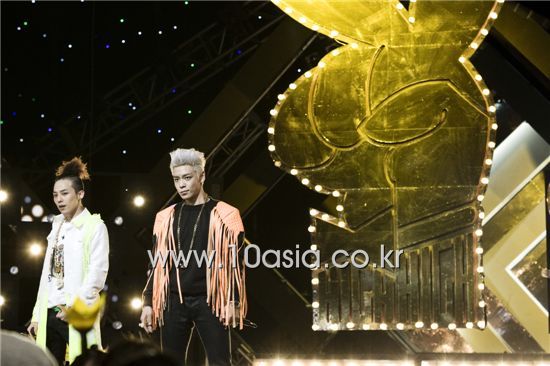 10: That seems to be the most personal story of the songs to your album (laugh). But how does it feel to receive response to the music you two have most wanted to do? The lyrics also tell of your personal stories and it's all working with the public.
T.O.P (Choi Seung-hyun): I think we had always wanted to create music of our own in which listeners have no choice but to recognize. So I think what we wanted to achieve the most through this album was to produce an album [so great that] nobody would say anything about Big Bang's music in the future, no matter what it's like.

10: I'm sure your thoughts on music has changed a lot as well. You're both heading more and more towards doing music that is of your personal taste and talks about yourselves.
G-Dragon: It's been five years since we debuted as members of Big Bang but I think we're finally feeling a sense of satisfaction. I'm sure it would've been difficult to make a hit out of "KNOCK OUT" had we promoted it when we first debuted. But it feels like we're heading in the way we intended them to. I think that the more we present people with such music, the more they'll naturally come to accept it. It feels like things are going the way we hoped and pictured them to be.
T.O.P (Choi Seung-hyun): If possible, we'd like for our album to be remembered as a work of art, something that people can picture in their minds, instead of something they just forget about after listening to.
G-Dragon: And if I may add one more thought about Big Bang, we are aware of the rumors of discord amongst our members with our album getting pushed back. But we've proceeded with both our and Seungri's album thinking they are projects leading up to Big Bang's album. What matters is not who comes out first and in what way it happens but that we present the path we want to take. If you consider our performances as 'shows', there'll be the show us to put on, Seungri's show, and Big Bang's show and I'm hoping you'll enjoy all of them. We get upset over such rumors but they also cause headaches when we talk about them.
T.O.P (Choi Seung-hyun): Discord or whatever it is people call it, we've never even fought before. (laugh)

10: What will Big Bang's next step be?
G-Dragon: Whenever we get together, we always say we should do heartwarming music. People may think that singers are supposed to do music that will relieve them of their exhaustion from everyday life but we want to think of things on a bigger picture. We live in a harsh world and people have changed a lot. We may still be considered young but there's a definite difference even between us and the generation below us. So if we could, we'd like to change that through our music. That's why we want to do heartwarming music and why the next album we release as Big Bang may be very different from what you're expecting from us. At the same time, there are reasons people like us because we have a style that is unique of us and for the music we've always done so we'll still have to satisfy those two prerequisites.

10: It somehow seems you two have become grown ups while working on this album.
G-Dragon: During the past two years we halted our activities as Big Bang, there had been various rumors about us but I think we rather matured a lot because of that, growing closer to each other and forming stronger bonds. We may still be young but it's as if Big Bang as a group has become bigger. I can't tell you everything yet but I think proving how big we've become will be more important than what music we do.

10: A bigger Big Bang?
G-Dragon: Our upcoming Big Bang album will involve us working with artists in various genres which will largely expand the scope of music we do. I'm excited to get to create a bigger framework for ourselves. For example, you can consider Diplo's participation in "KNOCK OUT" as the start to it. And it didn't get included in the album but we tried to work with Tiesto as well. Through such collaborations, we wanted to show the public that such attractive music exists and encourage them to listen to it. We're not teachers of any sort but as people who know a bit about music, we hope our music will tell people, "What do you think of this kind of music? Try listening to it. And try having fun like this".

10: Your job is always about showing something to others but it feels like that with this album, you found the balance between talking about yourself and what you show on stage.
T.O.P (Choi Seung-hyun): We have definitely changed in regards to personality but I don't think for the worse. (laugh) Our perception has broadened a bit which is why I think we were able to enjoy more freedom in making in this album. I don't think how we rank on music charts will matter anymore.
G-Dragon: Because we produced the album ourselves. We'd be putting on an act if the lyrics to our songs were about things we didn't or couldn't do but what we speak of are things that only we can speak of. So that's what we tried to write about as much as possible. In the future, when people listen to our music, we'd like to make people think, "Yes, they'll think this because they're Big Bang" instead of "Oh, they actually know how to think like this?"