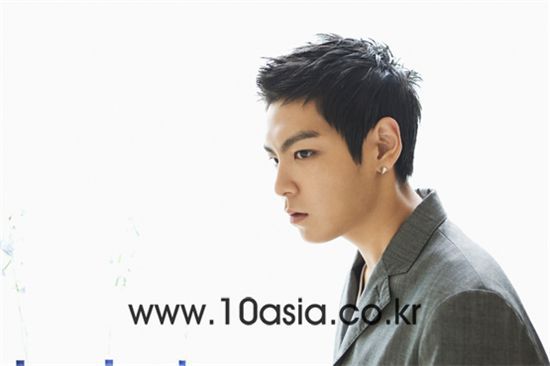 'A rapper with the face of a wolf yet the soul of a lamb'. This exquisite sentence a fan wrote on the Internet may be the most clear description of T.O.P (Choi Seung-hyun). He is a rapper with sharp eyes and a tough voice but has the sentimentality to like Damian Rice and Labelle. And he is a member of one of Korea's top idol groups but was once a boy who fought against his inner insecurities. That is why it is useless to ask what sort of actor T.O.P wants to be or what project he has planned next as a rapper. Because as he has been doing from his teen years and continues to do so, he will write lyrics to express himself while sitting at his desk. And he said he chose to take on the role of Oh Jang-beom in "71-Into the Fire" because he felt he was looking at himself. 10Asia sat down with the 24-year-old singer and actor to talk about his acting, rapping and Choi Seung-hyun.

10: This is your third time working as an actor. How is it? It could either become increasingly enjoyable or burdensome.
T.O.P: In the past, I never did anything without hesitation, whatever it may be. I would enjoy myself but I always had concerns and I tried to be careful. And I think it was because I was scared of something but I think I don't have that fear anymore. I think "71-Into the Fire" has had a good influence on me.

10: I met with Cha Seung-won and Kim Seung-woo before interviewing you. And they would both call you 'Our Seung-hyeon' when referring to you. (laugh) I think they liked you a lot.
T.O.P: I am so grateful to the senior actors and director I worked with for "71-Into the Fire". I feel uncomfortable around adults and try to be polite to them so they might feel that I'm hard to approach. But the senior actors [from "71-Into the Fire"] approached me first, helping me to become close with them. I felt a lot from seeing how they would be the director and senior actors on set but treat me as if I'm their younger brother when we're done filming.

10: Has your own life or sentimentality influenced the shooting for the film?
T.O.P: I felt a lot while looking at my senior actors. I like figure skating and it's because there's a certain stability to it. I think I'm drawn to how figure skating gives off the vibe of being an orderly entirety which is firm and stable, and I think I got a similar feeling of stability from the actors in "71-Into the Fire". I felt a lot seeing how they would constantly call their families when they don't have shoots because I've never been in such a stable state before. I would wonder what would happen tomorrow or if tomorrow will even come. But I think I've found more composure after doing "71-Into the Fire".

10: Is that why you chose to play the role of Oh Jang-beom in "71-Into the Fire"? He's a 17-year-old boy but he has to risk his life for a war. So he's someone who can't help feeling nervous because he really can't tell what will lie ahead of him the next day.
T.O.P: That's why I was drawn to it. Because he's a nervous 17-year-old boy. On the other hand, I thought that both I and Oh would want to become stable adults. I felt that Oh is similar to the actual me, especially how he is when he is alone. That's why I wanted to try to become him as much as possible. 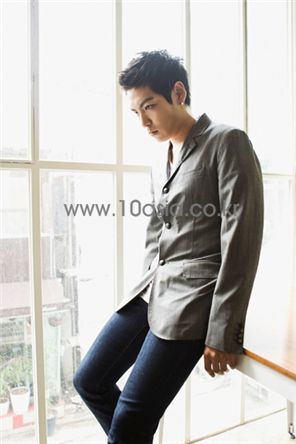 10: When you played Vick in KBS TV series "IRIS", I understand that you imagined your character thinking, 'If there were a character like Vick in film "Clockwork Orange"'. I think that is proof of how much you thought of him as an imaginary character but I think you must've shown a lot of your actual self in "71-Into the Fire".
T.O.P: I tried to inject as much of my real self as possible into my role. So I felt that I wasn't acting out an imaginary character but myself. I wouldn't say I have matured completely yet but I've lived my twenties pursuing various types of experiences and I think I'm maturing, little by little. I wanted to project that style of life I had lived into Oh Jang-beom. He has to take part in a war at 17 and lead a group of student soldiers which will mean he cannot help having many concerns and lead to him having no choice but to mature a lot during that short time period. I myself too would have been scared to play the role of Oh had I not matured at all.

10: How was it trying to express the emotions of a 17-year-old boy?
T.O.P: I think there is still a part to me which is young. It's also one of the reason's I like figure skating -- because I want to stay young. And my character Oh is innocent and humane in many ways which is completely different from what I have shown [to the audience and fans] so far so I tried to find this to me too.

10: What's different?
T.O.P: Up till now, I think I tried to package myself to seem like someone who is completely different from me. I'm not saying that I fooled myself and acted fake. I'm someone who does music and I have to show myself to the public. But I think I was worried that the closer I got with them, the more sick of me they would get. That's why I thought at one point that someone who does music should not be on TV too much. So there was a time when I tried to hide myself to keep the public from noticing this. I wanted to keep a distance from others. But I think I showed as much of myself as possible through "71-Into the Fire".

10: I saw that you once said during an interview that you asked yourself questions to establish your character when doing "IRIS". What did you ask yourself this time?
T.O.P: I actually try to rid myself of those thoughts because I end up having too many questions. When I was acting before, I thought too much, wondering 'Is this right?' I went the opposite way this time around, ridding myself of complex thoughts and told myself I am acting like I do when I'm on stage. I don't have any know-how into how to establish my character like my great senior actors do. But I tried to use my five years of stage experience to establish my character. I couldn't do this production otherwise.

10: In Big Bang's essay book, you wrote that you refused to go to acting school when doing KBS' "I Am Sam" because you were worried your acting might become standardized. What about now?
T.O.P: Everybody probably has different thoughts on acting, but I think that's right for me considering my personality. So far, I prefer maintaining the experiences I've had or emotions I have felt and reflect them into my acting rather than become standardized by learning something. For example, I thought about what my rapping voice should be like for 10 years until I came to use my current voice that I came up with myself. It's not my original voice but something I've purposely come up with so the head of my agency too tells me that I use a different type of vocalization technique to rap. So I'm taking the same approach with acting too -- that I'm slowly establishing my style. Only then I think I will be able to learn the technicalities.

10: You need to concentrate that much on your role to act but isn't it difficult to do that while also pursuing a singing career in Japan?
T.O.P: I listened to music on the film's set to focus on my emotions. I had no know-how whatsoever when it comes to immersing myself into my role so I wanted to graft music into the process. 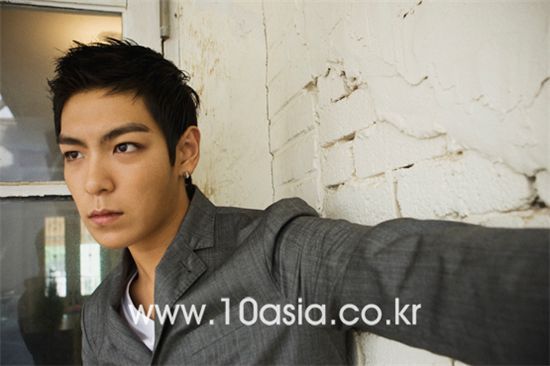 Big Bang member T.O.P (Choi Seung-hyun) who starred in film "71-Into the Fire" poses during an interview with 10Asia. 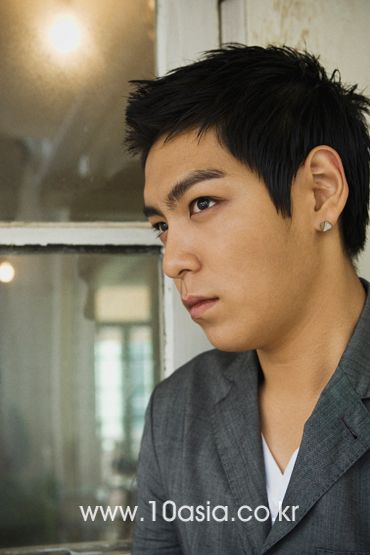 "[INTERVIEW] Big Bang T.O.P - Part 1"
by HanCinema is licensed under a Creative Commons Attribution-Share Alike 3.0 Unported License.
Based on a work from this source