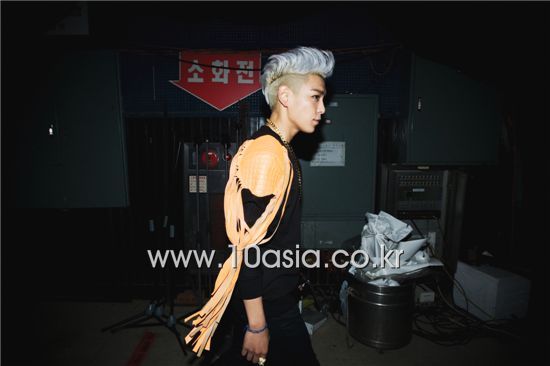 10: Of all the days, I'm interviewing you on Christmas (Laugh). You must already be exhausted from yesterday's concert and here I am bothering you with this.
T.O.P (Choi Seung-hyun): It's alright (Laugh). What did you think of our performance?

10: I posted few photos from your concert on my Twitter account and was hated by a few followers. They called me selfish for having fun by myself (Laugh).
T.O.P (Choi Seung-hyun): I guess I'll have to say I'm thankful if they think of our concert that way. (Laugh) When doing concerts something can always go wrong such as problem with sounds but it is our duty to make the best out of even the worst situations. I'm also grateful to everyone who was there with us and how they put in much effort to help us enjoy ourselves. It's been a while since we've performed on televised shows as well but I feel heartened and happy performing thanks to their consideration and great stage preparations.

10: Your performance seems to have changed from the past. For example, at your YG Family Concert, you suddenly approached a fan in the standing area of the stage, stuck your face right in front of hers, and started rapping.
T.O.P (Choi Seung-hyun): It wasn't anything calculated beforehand or anything. While performing together with Ji-yong [G-Dragon] we already have a picture of what to do but all the small things are improvised. I think that's the kind of power we came to gain while being in show business for past few years. Just like with acting, the emotions we deliver are feelings that we get from our music, not something that's pre-arranged. I believe it comes from our confidence.

10: You seem to exude more confidence in both the music in your newest album and stage manner. There is also a different kind of ease we get from your smoky makeup with the song "Knockout" which is quite interesting. Any special reason for such change?
T.O.P (Choi Seung-hyun): It's more about how I questioned myself over the past year. In the past I used to wonder what am I really doing this. There were some parts that burdened me greatly, leaving me to wonder whether I'm doing something that may be too much for me. But as I grew older I changed the question. "What do people want from me?"

10: The answer was your confidence?
T.O.P (Choi Seung-hyun): Won't people wish to gain vicarious satisfaction from me and confidence to go on with their lives? I think that was part of the reason my raps started to include lyrics like "Turn it up", and same for the album. It's not just to do something fancy or to bluff. Even if I show off a bit I wish those listening to my music have confidence for themselves just like I have for my career. I'm not sure how listeners will take it but I put a lot into that lyrics.

10: Is that the reason you started to share your name with a well-known brand, thus making a brand out your name as well? It seems like you were saying toward those who observe you "You can take me as you like. So I am".
TOP: I became a bit bold. Actually my real self if more of a thinker, worrying about lots of things and careful about things like that. But when thinking about what people want from me and what could be the right thing to do, I decided that carrying on like this would be much more refreshing. I wish people who are feeling down to feel better as they listen to this music. Whether this is just a showing off for me or not, I wish the music to reach to them with ease, hopefully not too bossy (Laugh). I wanted to express my sincerity at least once and I believe that one way of expressing for me.

10: You used to give off impression of delving deeper into your inner self but now you've started to think about your influence toward others as well. How was such switch in thoughts possible?
T.O.P (Choi Seung-hyun): I think I began to think more widely about the world I live in. World is such a bustling place yet lots of people today go through hard times, unable to gain energy from that vigor. And those are the people who are so good to me, to Big Bang or at least those listening to our songs. I thought I would like them to feel vicarious happiness by listening to our music. It got me wanting to express the way of feeling vicarious happiness in several roundabout ways.

10: Are such thoughts from perceiving your position as a singer? If you wish to do something for others you have to prepare yourself to take that much more responsibility.
TOP: I used to hate and feel burdened by such love and interest from other people in the past. I couldn't enjoy any of it. But after letting go of my greed, I became more relaxed toward it. My ambition for music, the thoughts that I got to do something with my music which used to haunt me melted away. In the past I remember frequently saying "Hope you like it", whenever I release a new song but now it doesn't matter if people don't expect much. Instead I came to think that I shall be the person who can amplify other's expectations. I want to return as much as I receive, urge myself to work harder to study music. There is so much I wanted to show.

10: Is this linked to your present situation? You've been involved in acting but then return to pour out your music all at once with the latest album.
T.O.P (Choi Seung-hyun): When I returned back from the film "71-Into the Fire" (2010) G-Dragon was already in the middle of doing his music and I resumed my place in Big Bang. So much has changed in music world, great people out in the stage and everything. Since I'd been away from that flow for quite some time that gave me a moment to step back and re-organize my thoughts.

10: The way you express yourself seems to have changed. Before, you said you act out a virtual character but in recent album you likened yourself to "someone you meet only through speaker or ear phone". Did you create a character out of yourself?
T.O.P (Choi Seung-hyun): Yes. We get to stand before a great many people compared to our age. Of course we gained praise as well as criticism but after going through that process repeatedly I became tired of it too. I wanted to maintain a certain level of distance from people and to show myself only at stage or in the music. But since satisfying the listeners comes as priority much of the thinking was about how to best harmonize the two needs in making of the new album. 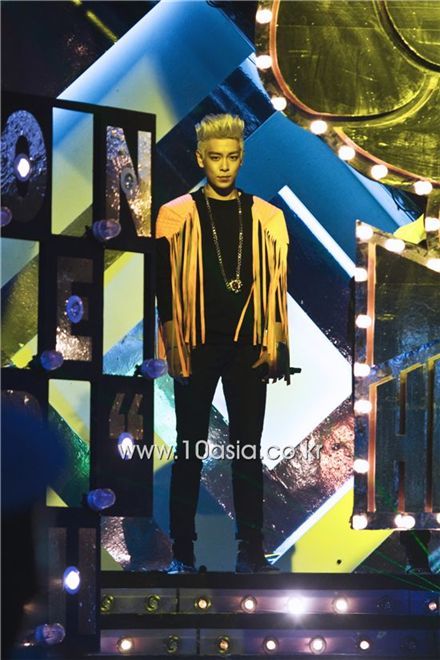 Big Bang member T.O.P (Choi Seung-hyun) takes the stage for a performance in front of audience. 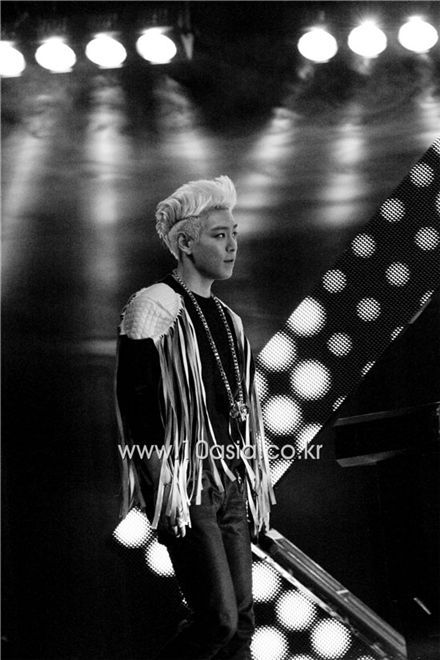