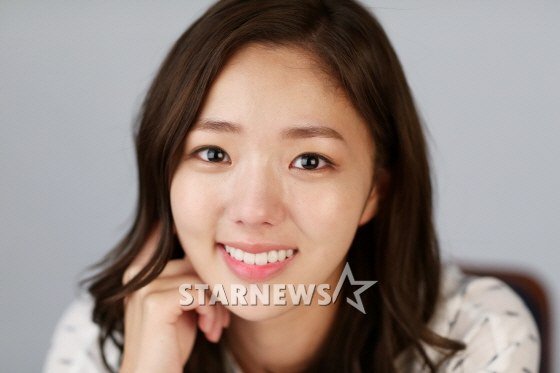 Chae Soo-bin is a bright actress. She smiles brightly and makes people feel good when she speaks. Her positive vibes is what brought her to where she is since 3 years of her debut.

She was even brighter than we expected. She was full of energy despite the 8 month long journey she just took.

Q: "Blue Bird Nest" was a hit and you must be happy you were successful with your first lead role.

Chae Soo-bin: The ending party was great. The atmosphere was great throughout the drama. I was happy being the lead role too. Choi Myung-gil, who was my mother in the drama, told me to prepare a speech for the end-of-year award events, but I don't know if I'm going to need a speech. Everyone helped me so much with this drama but she helped me the most.

I didn't really feel it at first. I was chosen to be Han Eun-soo after auditions and producer Ji Byoeng-heon said I was exactly what he was looking for. I sent him a text saying, "Thank you for making half of my 22nd year so great" and he said, "Thank you for doing your best and showing everything you have". I nearly cried.

You seemed well seasoned. When did you start acting?

I didn't professionally learn acting since I was a kid or anything. I only started in my 20s. I starred in the play "Him and Her Thursday" after an audition. I worked as an actress one day and a crew member the next. I learned how to communicate with the crowd on stage and found out a lot about myself.

If you started acting since you were 20 then what about school?

I did the play for 6 months. I was in my first year of school but I didn't make it to more than half the classes. I put in my all in acting. I am currently taking a break from school.

You must have had big dreams to act when you were in middle and high school.

Not really. I only wanted to do plays. I just admired those who acted at the time. Then when I turned into high school, I met the chairman of my company now on the way home. Then I started my path as an actress.

So it was like a street casting. You signed up for department of Theater and Play?

After joining the company my goals were set. I decided to act. So I signed up for theater. Everything fit into place.

Did your parents try to stop you?

Of course. "You? Acting? There are so many pretty girls out there", that's what they said. Then they saw me acting out the play and changed their minds.

How were your parents' reactions to "Blue Bird Nest"? since it has supporters of all ages?

They really like it. It's a weekend drama so all their friends also watch it and say a lot of good things about me".

Let's talk about the drama. Eun-soo (Chae Soo-bin) and Hyeon-do (Lee Sang-yeob) break up and then reunite, but the drama ended without saying what happened to them.

I thought it'd be a happy ending for sure. Then I started to worry when troubles came their way. But I was happy it ended nicely. There's a possibility between them.

How was working with Lee Sang-yeob?

Everything was new and awkward for me. So I made a lot of NGs in the beginning. Lee Sang-yeob gave me a lot of help. He helped me adjust to the surrounding and I was grateful".

What about the others?

Lee Joon-hyuk, the directors, the other cast and everyone else was nice to me. I was the youngest one there, you see.

"[Interview] 'Blue Bird Nest' Chae Soo-bin, "I cried at the text 'well done'""
by HanCinema is licensed under a Creative Commons Attribution-Share Alike 3.0 Unported License.
Based on a work from this source