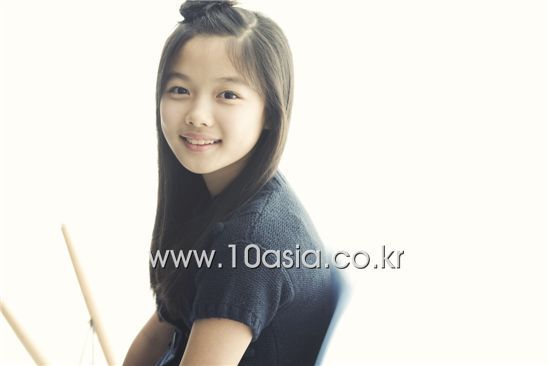 10: You recently played a middle school student in "Happy Maker Soonjung". How was that?
Kim Yoo-jung: It was fun because I got to wear a uniform but I don't think there's much difference in terms of the acting.

10: What do you think it'll be like when you go to middle school?
Kim Yoo-jung: I think I'll have a lot of fun. People say it's when you have the most fun. Oh, except for the studying. (laugh) Middle schools these days have snack bars, right? But not in Ilsan! And they study more than kids do in Seoul. Elementary schools in Seoul only test you in Korean language, math, social studies and science, and although it may differ depending on your principal, in the city of Goyang you get tested in English and the arts and physical education as well.

10: Ah, I see... How was the English test?
Kim Yoo-jung: The test was supposed to take four hours but it was extended to five so it seemed a bit boring and I was less nervous. The English listening test was a bit confusing as well. English is so difficult...

10: Do you go to academies for your studies?
Kim Yoo-jung: I used to in the neighborhood I lived in before but I haven't since moving schools. I think students in Ilsan must get a lot of stress from their studies. Everyone goes to academies during the day so you don't see a single student outside.

10: On which subject did you score the highest?
Kim Yoo-jung: Social studies and science. My mom let me adopt a puppy because I did well on my exams this time. (laugh) It's a Yorkshire Terrier named Toto and he's two and a half years old. He's in his teens in human age, so he's actually older than me, but he's still cute.

10: Does he listen to you well?
Kim Yoo-jung: Yes, he likes to eat so he listens to me when I give him something to eat. And he'll eat everything that humans do.

10: Is there anything else your mom has promised you in return for you doing well on your exams?
Kim Yoo-jung: Last year, after I took my mid-term exams, my mom got a new mobile phone case for me. I use money and mobile phones sparingly but the new phones that come out are nice so I got just the case changed.

10: And until what time are you allowed to watch TV at home?
Kim Yoo-jung: I used to be able to watch TV till late but it's daytime when I'm back from school, my mom tells me to study during the day, then time flies by and my mom tells me to sleep before eleven or that I won't grow. I don't know why mini-series will show at ten! I need to pay to watch them on the Internet if I miss re-runs.
10: What other family members do you have outside of your parents?
Kim Yoo-jung: My sister is in eighth grade and my brother in 11th grade. We're all three years apart.

10: Who do you think you're closer with?
Kim Yoo-jung: My brother treats me well but I think I'm closer to my sister since we're both girls and are closer in age. We used to fight all the time but she's very good to me and we're close now. I think I won't need a younger sibling since I'm happy with having an older sister. 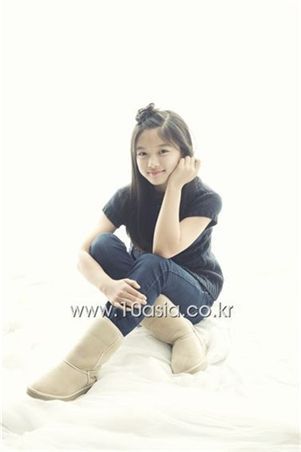 10: What do you mostly talk about with your sister?
Kim Yoo-jung: About Big Bang.

10: Which Big Bang member do you like the best?
Kim Yoo-jung: I like all of them but... I like T.O.P. (Choi Seung-hyun). (Choi Seung-hyun) He and G-Dragon released an album recently. And Big Bang will make a comeback on February 1.

10: Have you met them in person as well?
Kim Yoo-jung: I became close with Uhm Jung-hwa while filming movie "Haeundae" and she took me to a televised music program so I met them there. And I recently saw them again at the screening for "Sammy's Adventure: The Secret Passage" because Daesung did the voice over for it. I enjoyed the movie as well but I immediately recognized them from far away.

10: Did they look amazing from far away as well?
Kim Yoo-jung: Yes, and top caught my eye even from far away because he dyed his hair yellow.

10: Wouldn't you like to get to work with him someday?
Kim Yoo-jung: I'd like to, as siblings.

10: What about the role that you and actor Lee Tae-ri played in KBS series "Grudge: The Revolt of Gumiho"? (laugh)
Kim Yoo-jung: (shakes head) We have too much of an age difference so... And I like him too much that I think it'll actually be difficult for me to act with him. (laugh)

10: Men in their 50s are uncles as well?
Kim Yoo-jung: I'll call them 'ajusshi' from their forties and onwards. I used to call them 'uncle' if they weren't married and 'ajusshi' if they're married but almost everyone marries before they're in their forties now.

10: Well if guys in their twenties are uncles, T.O.P. (Choi Seung-hyun) is in his twenties as well. (laugh)
Kim Yoo-jung: It's okay because he looks young. And everyone calls singers 'oppa'.

10: What about Lee Tae-ri who really is an 'oppa' to you? He said that he practiced magic to become close with you in the beginning.
Kim Yoo-jung: No, that was totally awkward! (laugh) He was so much taller than me and we weren't close at first but he's very easy-going and kind, like an actual brother, so we became close later.

10: Do you remember the first time you acted? You started when you were five years old.
Kim Yoo-jung: The first acting role I played was in movie "DMZ" but I don't remember anything. It was weird watching it on TV later on. It's a scene where I'm in my dad's arms but I don't remember that dad and wearing the clothes I did. Maybe I have amnesia? (laugh)

10: Then what is the earliest role that you do remember playing?
Kim Yoo-jung: Movie "Sympathy for Lady Vengeance" that I filmed right after "DMZ". I was in one scene for it and we were shooting at a shut-down school when it was very cold. I was a girl who had been kidnapped and I had maybe this many lines (opens apart thumb and index finger) in tiny writing. I was supposed to record my voice on tape saying, "Mom, I want to go home" but the main character played by Choi Min-sik was standing right there which was so scary that I just kept crying. And so I was asked to come out from where I was because I kept crying but I didn't. That's when director Park Chan-wook came to me and said, "You really want to act, don't you?" (laugh) I got scolded from my mom so much after my manager told that story to my mom.

10: But Choi Min-sik from "Sympathy for Lady Vengeance" was quite scary. (laugh)
Kim Yoo-jung: My mom is such a fan of his that she had scolded me back then but she said she was so scared of him after watching his recent movie "I Saw the Devil". (laugh) He becomes the character after falling into it completely. The guy who played Joker in "The Dark Night" fell into his role too much that he ended up committing suicide. But actors can't do that! You need to come out of your role when you're done with it.

"[INTERVIEW] Child actress Kim Yoo-jung - Part 2"
by HanCinema is licensed under a Creative Commons Attribution-Share Alike 3.0 Unported License.
Based on a work from this source