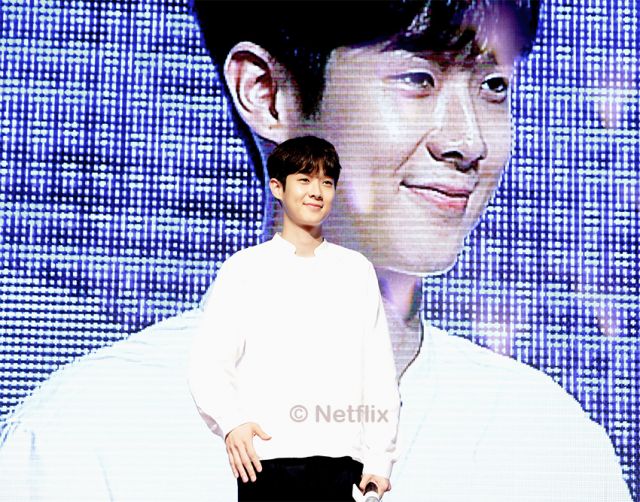 Choi Wooshik's outstanding performance in 2014's haunting, heartbreaking "Set Me Free" not only won him the Busan International Film Festival Actor of the Year and the prestigious Blue Dragon awards, it also gained him a place in the incredible international cast of Director Bong Joon-ho's "Okja", as a rebellious avatar for Bong's message to today's youth.

In his first overseas interview, Choi told me about his early days that led to meeting US stars, Steven Yeun and Paul Dano on the "Okja" set, and his future projects.

The Lady Miz Diva:  I find your story fascinating because you're someone originally from South Korea who grew up partially in Canada. What made you decide to pursue acting in Korea instead of in Canada or the US?

Choi Wooshik:  When I was growing up in Canada, I didn't really want to act.  At first, I wanted to direct theater - that got me into acting.  My family had to go back to Korea for a short period of time, so I followed them.  When I went there, there was a huge international audition for this really big drama, and I thought maybe I will just try it, or whatever, let's just see what will happen.  So I did it and I got in.  The audition was really internationally big; people were coming from everywhere.  At that time, I was so surprised because I never learned acting, or how to read a script, so I don't really know how, but I got in.  So after that, I worked to study acting and after that, I got into this company, and after that, I did a few auditions and I got into a drama called "The Duo"; it was a historical drama.  In the beginning, I did a lot of dramas, and then I did "Set Me Free".  So many people were interested in "Set Me Free" and I got really fortunate to receive the Busan Actor of the Year {award}.

LMD:  You are represented by JYP Entertainment. From my distant observation, they seem like one of the most welcoming of a more global approach; having artists from outside Korea, or artists who can work outside of Korea.  Is that a correct assessment? Do you feel encouraged by the company to try to make an effort in the west?

LMD:  One of the things I enjoy about your acting is how you totally give yourself over to a role.  Whether it's a comedic character in "The Rooftop Prince", "Fated to Love You" or "Hogu's Love", your supporting role in "Secretly and Greatly" and "Train to Busan", or the haunting, harrowing, starring performance in "Set Me Free"; you pull on the skin of your characters and there seems to be no limit to how much you give physically or emotionally.  When you are creating a character, are you someone who needs to live in the skin of that character, or can you leave the role on the set at the end of the day?

Choi Wooshik:  For that character that I played in "Set Me Free", I had to live as Yeong-jae for four months.  It was my first time doing really heavy acting.  After that, I was so depressed and I couldn't get out of the role.  It was really new for me to experience that.  When I was acting in "Set Me Free", I think I was really into it for a few months, not a year, but maybe few months.  I've only been acting for six or seven years now, so I'm still experiencing new stuff every day.  So, it's really hard for me to say whether a method actor or not, but at that time of "Set Me Free", it was really new for me.

Other acting that I did in roles like "The Rooftop Prince", or in other movies, I could just be joyful and just learn on the set, but "Set Me Free" got me really depressed and it was definitely new for me.

LMD: 'Set Me Free"s character Yeong-jae is very complex.  He's someone who does awful things, but there are legitimate reasons and motivations, but he still does terrible things.  You have the huge challenge of portraying him so fully that we can see his depths.  Do you have to find a relatable core to the characters you play, even when on the surface, they might not seem so sympathetic?

Choi Wooshik:  To be honest, Yeong-jae was the type of guy who felt when he was at home, he didn't feel like it was his home.  He would always have to adapt to his environment, all the time.  But, for me, my whole life was kind of like that, because when I moved to Canada, I had to adapt to my environment, I had to make new friends.  And after coming here again, I had to adapt again.

When I was in Canada, I thought I was awkward and out of place.  When I came here after living in Canada for 10 years and coming back here, it didn't really feel like it was my hometown, at first.  So, in my life, I've had to always adapt to a new environment, so I think that was my core similarity to Yeong-jae.  It helped me a lot to portray Yeong-jae.

Choi Wooshik:  You know there's a whole new types of media content these days, right?  If I had my own production company, I would love to make YouTube films.  Because before, I told you that I really wanted to be a theater director, right?  So every time when I was acting, I always had this dream of being a director, someday.  So I was always thinking about making a short film, or short series that would go streaming on YouTube, or Netflix, or Vimeo.  I was trying to do that, but it involves people, it involves money.  I was just waiting for a chance, but I would love to do that.

LMD:  Well, that's interesting because your film, "Okja" is currently embroiled in a controversy in South Korea because it is being released on Netflix's streaming platform.  What is your feeling about it?

Choi Wooshik:  I think the people in the industry right now see streaming as a whole different genre.  I think they need to step it up and think about the future.  At first, when the iPhone came out, people were like, 'Oh, that's just an iPod with phone ability', but it was a whole new generation.  People just think that it's new, so they don't really accept it.  But I think maybe in five or 10 years, all movies are going to be net streamed.

LMD:  What is coming up next for you?

Choi Wooshik:  I've done three movies already.  When I was filming "Okja", I was doing other stuff too.  I've done three movies that haven't come out yet, so they're coming up.  So right now, I'm filming this movie called "Monstrum" {Literal title: WATER MONSTER}.  You know the movie by Bong Joon-ho called "The Host"?  It's similar to that, but it's a historical Korean setting.  I was just filming that until five this morning.

The first movie that I have coming up is called "The Princess and the Matchmaker" with Lee Seung-gi.  He's in the Army.  He filmed this movie and then he went into the military right away.  That comes out in October in Korea.

The second movie is called "Rosebud".  That will come out this winter.  I'm not sure of the exact date, yet.

"Monstrum" comes out next summer.  We're filming it right now, but it has a lot of CG work.

"Okja" opens in cinemas and streams on Netflix on June 28th.

Special thanks to Mr. Dooho Choi of Kate Street Picture Company for his invaluable assistance with this interview.

Original article on The Diva Review:

"[Interview] Choi Wooshik with The Lady Miz Diva"
by HanCinema is licensed under a Creative Commons Attribution-Share Alike 3.0 Unported License.
Based on a work from this source