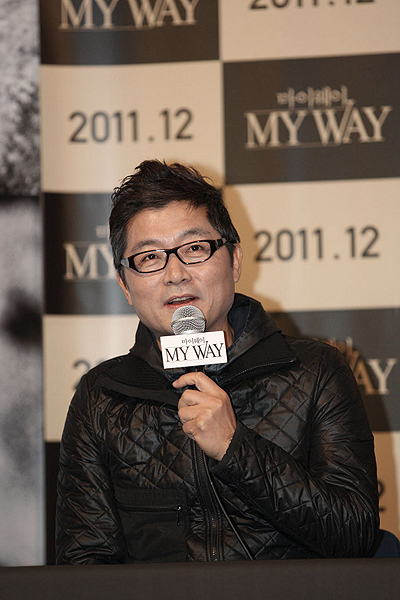 After shooting Korea's most expensive film in history, director Kang Je-gyu talks to KANG Byeong-jin about shooting on location with multi-national cast and crew, and his thoughts for the future.

KCT: Why were you so captivated by this true story?

Kang: I was shocked to find that such an unfortunate and dynamic tale could exist in real life. If our ancestors survived the turmoil of history, I wanted to know what drew them to be so tenacious and passionate about life. Those thoughts gave me a thrill. I also wondered if this kind of opportunity would ever come to me again. As a film director, it was a meaningful challenge to create a film out of this kind of story.
KCT: You cast Jang Dong-gun and Joe Odagiri. What did you see in them other than their star qualities?

Kang: They are both actors I personally like. It was fun just imagining the two acting within the same screen. Other than the two actors, there's also Fan Bingbing who features as an enemy Jang Dong-gun encounters in Mongolia.
KCT: Didn't "My Way" cost about twice as much to produce than "Taegukgi"?

Kang: If you consider inflation, it's not quite twice the amount. "Taegukgi" cost about KW14 billion (about US$ 12 million). Actually, even then it wasn't a movie that could be shot with KW14 billion, but we did.
KCT: This your first time filming outside of Korea, wasn't it?
Kang: It was a special experience. When we started reading the script with the actors, I thought it might actually be easier to go to the US and work with just American actors. There are about five languages spoken in the film, and each language comes with a translator, so it was quite a burden thinking about how to direct the film. But I had already put a lot of thought into how I would direct acting done English and how to direct and capture English-language sentiments while I was preparing for this film in the United States. That experience was very helpful. The languages may be different, but in the end the attributes are similar.
KCT: Filming in Latvia must have been the most difficult part.

Kang: There was a point when filming was postponed because of heavy snow in Korea. We couldn't delay the filming any longer, especially when the delay started to impact the shootings scheduled for Latvia. If we were to miss one day's shoot, almost KW100 million (about US$ 86,000) would be going down the drain. There were about 70 to 80 Latvian staff on set and they were contracted on a weekly basis. The team in charge [of location shooting] had figured out most of the shooting conditions, but there was nothing we could do about the wind. The wind speed changed all the time. But we were lucky because there weren't any big variants until we were done. After we wrapped, the region was hit with a huge downpour. It would have been a serious problem if the rain had come only a few days earlier.
KCT: This is your first film in seven years. What are you planning next?

Kang: My company is planning something, but we're not at a stage where we can reveal anything. But I felt very lonely while working away from Korea. Now I want to make films working closely with like-minded fellow directors. I even named my company "Directors". Whether it was because of my own will or others', I was unable to make films for a while and now there's a certain thirst I have to quench. Of course, I will be making films that move my heart, but before that, I think I'll have to start being more intense and diligent.