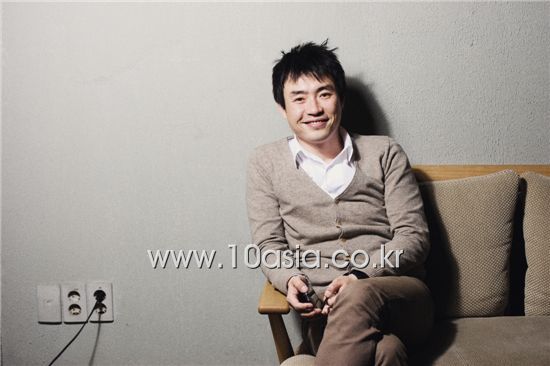 It has already been ten years since director Ryoo Seung-wan, whom we thought would always be the 'action kid', showed up in the film industry with "Die Bad". And while having shot ten movies during that time, he has been on a break over movies that have flopped, agonized over people not liking his scripts, and is now old enough to look back in embarrassment on childish remarks he made a long time ago.

However, his movie "The Unjust" is the result of what he describes as having "lived through and felt". And it presents us with a form of shock that is different to what the audience has felt from his previous films -- a sense of reality so vivid that is weighs down us as very much the Republic of Korea that we live in today. What happened to him? In his interview with 10Asia, Ryoo Seung-wan talks about "what hasn't changed but has changed".
* This article may contain spoilers.

10: The response to "The Unjust" had been extremely positive even ahead of its premiere, securing the highest number of advance ticket reservations and seeing many favorable articles on the movie. You must be happy doing this interview.
Ryoo Seung-wan: I should be modest but it's true that I'm happy. (laugh) How well your movie scores only becomes increasingly important. But at the same time, sometimes your movie will flop, good movies are constantly being made, new talents debut every year so even "The Unjust" will become a movie from the past in a few weeks. So people with jobs like ours have an increasingly harder time unless we see results that are significant. And people like me who have worked for about ten years expect less and less which raises the level of our insecurity. I'm so the sense of insecurity only increases. I'm turning 37 this year but to think that I'm considering retiring at such a young age... (laugh)

10: What do you mean retire? "The Unjust" will be the turning point or a new starting point for you. And many people are saying that you have changed.
Ryoo Seung-wan: Nothing about me has changed fundamentally but I think I've changed. And it could be because "The Unjust" was written by someone else but this was the movie I had the least hardest time filming, both physically and mentally. There really are a lot of scenes I shot with brisk steps. (laugh) And when I think about why, I think it's because my mentality in shooting films has changed. I didn't ask for it but I spent last year as a sabbatical year. I had a very hard time after "Dachimawa Lee" failed -- I wasn't getting investments for projects and those that were ready to go into shoot would get turned over -- but now that I look back on it, it's ultimately what changed me. I think I wrote six or seven rough drafts of scripts just last year. So it was a time period which made me think a lot. Being famous is different from being capable. I made a hard-headed assessment of myself from where I was at the state I was in then. And I came to realize, 'Ah, I've spent the past ten years making movies very happily. I've thrived on the authority I hold as a director'. And then I told myself it is finally time to fulfill my responsibilities as one.

10: What responsibilities as a director are you referring to?
Ryoo Seung-wan: I was worried about thing like, why am I not getting investments for my movie? Why do people not like my scripts? And maybe about the stereotype or prejudice people have of me? I wondered whether certain things would have turned out differently for me if I had been a new director and people didn't have any stereotypes of me. But the important thing is that after spending my time like that, I became very aware of the fact that I had been making movies of a certain style. I had wanted to reveal what I like and show it off. And just like how kids copy adults when they're learning to talk, I wanted to follow the style of the masters that I like. But I lost interest in such things and wondered whether there's any point to it because no matter how hard I try, I would never become them and I would never be competition for them because they were already at a peak nobody could dare surpass. So I figured looking for something different would be the road I should take -- that I have to find who I am.

10: Like you say, there was a vibe about your movies that is distinctive of you -- they sort of specialized in action and were full of b-grade emotions?
Ryoo Seung-wan: People think my movies are unique but I myself don't see that many similarities between my work. Except for the fact that Ryoo Seung-bum appears in them a lot and there are a lot of fights. (laugh) If you think about it, "Crying Fist" and "Dachimawa Lee" don't have anything in common and "The City of Violence" and "Die Bad" don't fall within the same genre either. So I feel good about hearing people say "The Unjust" is different but I can't confirm or deny it because I didn't intend on it. Movie directors speak through their movies so what I have experienced and felt is what has become the movie, hence "The Unjust" is the product of what I have felt this year. So who knows what my next movie will be like.

10: Could you give me a more concrete explanation on how your attitude changed?
Ryoo Seung-wan: Before, I wanted to be called a writer and filmmaker so I concerned myself with everything that would go on and have the do-as-I-say attitude. But I think I now see everyone as equal to me. The most important job for the director is to know when to give the okay sign. And that has given me a wider range of choices. Up till "Arahan", I made the actors follow my direction to the extent that I had them speak in the exact way I wanted them to but I changed starting with "Crying Fist". I would throw stuff and just make a racket when I worked on "Arahan" and it probably doesn't come as a surprise since there was even rumor that I hit people. (laugh) I mean, there were times I would do push-ups with the crew or get into slight scuffles (laugh) but I have never hit someone. And my brain had always known that a film is half done if you have a good script, crew and cast to work with but I finally really felt that while working on "The Unjust". It just really made things easy for me. Good actors will make their characters come to life, good cinematographers will shoot the film at good angles, good lighting directors will provide adequate lighting, good editors will cut out the unnecessary scenes and good music directors will rub in the appropriate music. All I need to do is say what I like and don't like. It helps keep my stress level down as well.

10: "The Unjust" seems to be the most realistic movie you've produced. It emphasized the current state Korea is in -- to the extent that it was creepy.
Ryoo Seung-wan: I was lucky to get to work with such a great script but also in the sense that a series of events occurred in the process of making the film, like a death note. The only thing that had originally been similar between the script and reality was that a child molestation case gets solved as soon as the president visits the police station in charge of the case. When the actors first got the script they thought that it didn't make sense but it actually happened, just as we were finishing preparations to go into shoot. So at first we thought we're really lucky but the crew got scared as the case got more serious because it could turn our movie into a documentary. But I just felt weird rather than worried or scared. I believed that our audience would be mature enough.