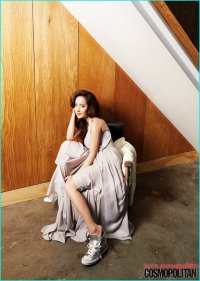 In 1997, the pop industry went wild at the entrance of three girls. SES, consisting of Eugene, Bada, and Shoo, hit Korean popular culture at a time when the word 'female idol' didn't even exist. Wonder Girls and Girl's Generation, who are causing a girl power storm in popular culture, owes a lot to SES.

Eleven years later, the three fairies are walking different paths. Bada is active as a solo singer, and Shoo is acting through musicals.

Eugene, who has had experience acting since the days of SES, has now left the label of being a singer and is a respectable actress. Eugene, who only has one movie out, has become the publicity spokesperson for the Puchon International Fantastic Film Festival, which may show sentiment of approval of her as a movie actress.

After the press conference for Puchon Film Festival on the 24th, we asked her about being a movie actress.

-You've been appointed as the publicity spokesperson for the Puchon Film Festival. Do you feel recognition as a movie actress?
Truthfully, I'm not sure. At first, I was just happy, but I'm getting a lot of questions like this. So I think that I need to work harder as an actress.

-Do you like fantasy or thriller movies?
I watch any genre. I enjoyed watching "The Chaser", which was screened at the film festival. I am also watching Hana TV these days.

-You usually did romantic comedies but are you saying you have interest in thrillers such as "The Chaser"?
If I had the role of "The Chaser", I would have worked hard at it. But I don't think I would have wanted it. I feel like it doesn't match with me.

-It's been a long time since you've been an actress, but the echo of the past is loud. There are instances where you get less recognition than other actors your age.
I'm not worried about it. If I regret the past, it means I'm denying myself. I don't have any thoughts about how much recognition I need, and I don't know how much I need. I'm thankful that I am given work and I can choose. Because some day, there might not even be a chance to do that.

-You've finished filming "The Man's Book 198 Pieces" and "Feel So Good", but they are not premiering. It's in gear with the situation of the movie industry but do you feel like it's an emergency?
They are works I finished filming last year and this past January. I feel more relieved that I filmed it than it is an emergency. It hasn't premiered yet but I've heard that there are some that are canceled while filming, or discontinued after filming one scene. In light of that, I'm lucky.

-You're very optimistic.
It's easier to be optimistic. I don't really mind the rumors and scandals. If I did, I wouldn't have come this far.

-You were considering entering the U.S. for a while. You're good at English too.
I discussed a lot over many projects. But truthfully, I have no greed for it. It would be nice to experience it but I think my life would become too busy. I want to be satisfied and enjoy my life.

-What kind of work do you do at the Puchon Film Festival?
I attend the opening and closing ceremonies. I also join in watching the movies all night long. It's very fun.

-Do you just comfortably go to the movies?
It's been a while since I've just gone out. Of course it's different than SES times.

-Do you long for the SES days? There are endless rumors about a reunion.
When I look at the stage, I want to be on it as a singer. We also officially spoke about our reunion on the 10th anniversary. But the plans vanished due to various problems. I think there will be a chance some day.

-It seems you'll have some pride as the original female idol.
When I see Girl's Generation or the Wonder Girls, I feel the effect of time. Of course I have pride for being the first. In the same way I get choked up when I see Seo Taiji, there must be someone who thinks like that when they thik of us. Someone said this to me. For us, it was work, but for people, we gave them memories.

-Is there anything different than when you first acted?
I've always acted while enjoying it. Now, I have more fun while focusing. I learn a lot with each project. It's not just something to do with skill.

-Have you been tired of being labeled as a 'singer turned actress'? Did they put limitations on your role?
Isn't it the same as people who do plays then movies, musicals then movies, and singers then movies. It's a challenging attempt at a new genre. I think that singer-turned-actresses are more accepted these days.

-SES member Shoo also tried acting.
I believe it was a good move. I've been watching her since she did musicals. There's no specific advice I have for her. I just believe that she learns a lot with each project she does.

-Do you have a goal as an actress?
I don't think my goal was ever to receive recognition. Although I am thankful if they do recognize me as an actress. I just want to enjoy it as I work as an actress.

"[Interview] Eugene "Feel the effect of time when I see Girl's Generation  Wonder Girls""
by HanCinema is licensed under a Creative Commons Attribution-Share Alike 3.0 Unported License.
Based on a work from this source