Despite her new tomboyish image, Ha Ji-won is still a girly girl inside.

To date, Korean cinema has remained largely conservative in terms of female leads, largely in the manner of 1950s Hollywood. Women are usually portrayed as either an asexual Audrey Hepburn or a sultry Marilyn Monroe, with a small gray zone for a few quirky, intelligent Katharine Hepburn types. 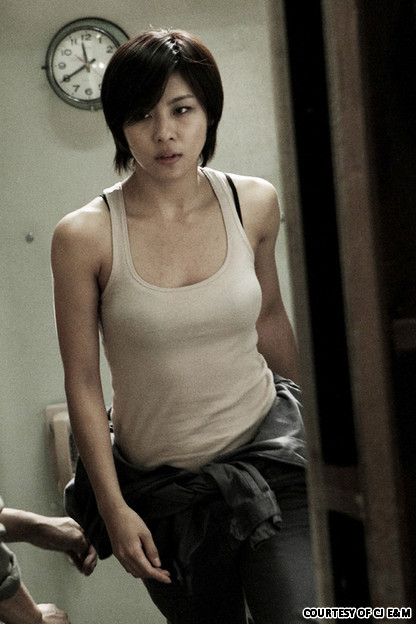 As the female kick-ass protagonist in "Sector 7", Ha Ji-won thus breaks new ground as an action star, earning the nickname "the Korean Angelina Jolie". The 33-year-old learned how to scuba dive and got a motorcycle license for her role as a tough mechanic in the film about an isolated oil rig crew and a deadly sea creature.

Drilling for oil in the good old "Armageddon" fashion in the film seems to have been no big sweat for the actress (Ha dreamt of becoming an astronaut as a child) -- and she makes Lara Croft look tame as she pulls off motorcycle sequences and fights the slimy, carnivorous monster by herself for a good quarter of the movie.

Director Kim Ji-hoon repeatedly told reporters how Ha braved 15 days of shooting solo battle scenes with an imaginary monster (a CG creation by Seoul-based Mofac Studio that appears in some 70 percent of the movie), and had to make visits to the hospital several times after suffering from dehydration and fatigue.

"I don't know how I did it", says Ha. "I think I was just in the zone. My character Hae-jun is a feisty woman who's tougher than the men in the film and loves her job so much that 'she can probably eat rice with oil', as one of the guys say in the film. That's why when she's left alone to face the monster she sets off to kill it instead of breaking down and crying. When I was wearing the oil rig uniform I just thought I had to be strong like Hae-jun".

She says that her male co-stars, including the veteran actor Ahn Sung-ki and heartthrob Oh Ji-ho, helped her craft her tomboyish character.

Role model
"I'm just glad that other Korean actresses would be able to play such roles in the future", says the actress. "But now that I think about it, it was so crazy, riding the bike in the rain. I don't think I'd be able to do it again".

Ha has played everything from a sexy gymnast ("Sex Is Zero") to a stuntwoman ("Secret Garden") in 24 films and TV dramas to her credit. But she says her latest action flick instilled a sense of confidence like never before.

"I did feel a great deal of burden trying to build a believable character and the fact that I had such a big role in the movie. I just tried my best. Now I feel like I can do anything, whatever it might be".

Although she is flattered about being compared to Angelina Jolie, she's a little upset that her overdeveloped muscles make it difficult to fit into her favorite pair of rhinestone-studded skinny jeans. It's no surprise; even Jolie decided to tone down her guns for the second "Tomb Raider" film.

"I built my muscles too much to play a boxing champion (Kim Ju-hee) in 'Miracle on 1st Street'. It was great for the movie but an actor's career goes on after one work, and it didn't help doing 'Sector 7' and playing a stuntwoman. I'm still recuperating from (these roles)", says Ha.

Currently Ha doesn't eat red meat because she needs to make a lean, light physique to play the ping-pong Olympic gold medalist Hyun Jung-hwa in the upcoming film "As One".

When asked about the possibility of debuting overseas, particularly since distribution rights for "Sector 7" have been sold to 46 countries around the world, Ha smiles skeptically.

"To be honest I haven't really thought about it. I'm an adventurous person so if the opportunity comes around to go to Hollywood or something, why not? I love adventure and first-time experiences". 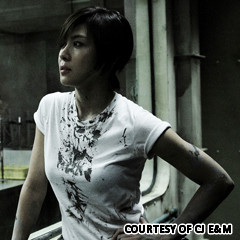 Following her much-beloved role as a stuntwoman in drama "Secret Garden", Ha's "Sector 7" role has cemented her status as Korea's biggest action star.
In the meantime she hopes that fans can look forward to her next screen persona.

The actress refers to the roles she has played as "different lives I've had the pleasure of living". "I can't say that one project is more meaningful than the other. I just hope my next work becomes my signature piece".

Yet contrary to her action chick image, she says she misses doing melodramas and romantic comedies, and looks to Meryl Streep as a role model.

"I wish to become an actress that feel intensely alive in her 50s or 60s, someone who can look lovely and adorable wearing overalls in a romantic comedy".

But does she ever think about taking a break?

"Sure. To be frank I am quite tired but decided to take on 'Korea' because I loved the script. But I do want to go back to the sea as soon as I can. I fell in love with scuba diving while taking lessons for 'Sector 7'. Being underwater is so magical, as if you're floating in space. But I can't because right now I'm playing ping-pong all the time, even inside my head".

About Hyo-won Lee
A member of the UNESCO International Dance Council, Hyo-won Lee writes for The Korea Times while contributing to The Hollywood Reporter and appearing on English radio programs. In her free time she can be spotted ordering "jajangmyeon" during a picnic by the Han River, snooping around vintage boutiques or trying to compose tone poems.
Read more about Hyo-won Lee

"Interview: Ha Ji-won and Korea's first 3D movie"
by HanCinema is licensed under a Creative Commons Attribution-Share Alike 3.0 Unported License.
Based on a work from this source