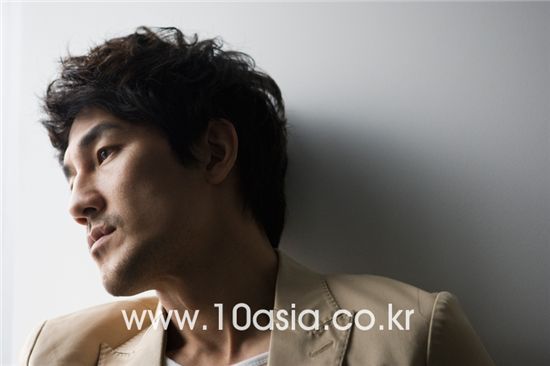 Q: You often played characters that were considered "cool" by men rather than women.
Han: Yeah. I want women to like me but I think they like sensitive and affectionate men like the character Lawyer Seo (played by Park Si-hoo). Well, it's fine. Being an actor that men like... (laugh)

Q: Your abs caused a stir during "The Slave Hunters" and I heard that you are extremely into sports -- you once even said that you wanted to be a mixed martial arts fighter. What kind of influence do you think training one's body has one's mental health?
Han: I like exercising by myself, so I just work out at the gym more than anything. I think that, as a man, you start to feel confident psychologically when your body gains a certain amount of strength. So I tell younger actors, "Don't just drink every day. Do some exercise. It's good for your health and good for your mind too". Contrary to how I look, I can't drink alcohol so I don't have any other way to relieve stress. It's either going to the gym or going to sleep. (laugh)

Q: I think it is important for everyone to have confidence, but particularly more so for an actor. You have to believe that you are an attractive person before you can make the director, producers or viewers to believe that about you.
Han: That is right. There is a certain psychological battle among actors and with the director too. To be precise, it is more like reading the other person's strengths and forming an image of him on a subconscious level rather than a battle. And I think that is why having confidence is quite important. Confidence is not just something that you can obtain by sitting around and thinking "I am cool. I am good at sports and I am good looking". You have to discipline yourself enough and have to get used to it.

Q: You wandered for a pretty long time in your twenties. You changed your major in college and switched to acting after studying music. And even then, things didn't work out well in the beginning. It is not easy for an actor to become famous after he passes a certain age.
Han: No. But in a way, I feel relieved about it. If I had been in the spotlight, living fancy at a young and then gone down, it would have been very difficult for me. But now that I have gotten somewhat older, I think I have enough strength to handle something like that should it happen to me. When I look at young idol group singers these days, people are crazy about them but I worry about them. The same with young child actors too. It saddens me to watch them live their lives skipping things that they need to experience and learn at their age. I think it is better to get started after the age of twenty, when you are not a child, and then succeed in your early thirties. By that time, you know a little about the world and you start to have the power to endure whatever happens. It came a bit too late, in my case. (laugh) 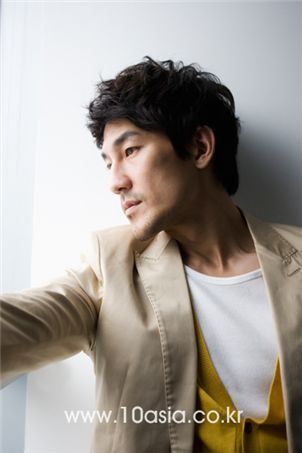 Q: I see that you bought an iPhone.
Han: Actually, I don't do much with this except go on Twitter.

Q: You have written some stuff on DC Inside Gallery and Twitter -- you seem to enjoy communicating with people.
Han: I am trying to communicate more as I get older. When I was young, I thought I was a little different from other people because I am an actor. But now I don't think I am. I feel that it is more important, as you get older, to talk to people, know what they think about and what they think about me. That is life and, at the end of the day, acting comes from life too. So I try to be around people more and more.

Q: You rarely do any variety programs or talk shows but I heard that you recently appeared in SBS variety show "Steel Heart". What did you say on the show?
Han: I am not a good storyteller but I like telling funny stories. And I like making people laugh. But my agency actually doesn't let me go on talk shows. They are worried I might cause trouble. (laugh) The "Steel Heart" episode that I taped was a special episode for the World Cup, which will air in June. My late father was on the national soccer team, so I talked about that.

Q: You had a good start for the year 2010 -- from "The Slave Hunters" to "Prosecutor Princess".
Han: This has been the luckiest year of my life so far. So I have been buying a lot of lottery tickets. (laugh) I haven't won yet but with the luck that I've had this year, I think I might.

Q: What would you do if you won the lottery?
Han: I would like to set up a film production company. But a smaller, more detailed dream I have is to have a nice little office that has a great view. Where I can read scripts and watch movies.

Q: Saying that you want to set up a film production company sounds like you want to make your own movies. What kind of stories do you want to tell?
Han: Of course I have stories that I want to tell, but I don't think that is important. I could tell my story but that doesn't mean people will come to watch it. I would just end up telling the story to myself. The important thing is to tell a very entertaining story and to fit in your own story into that. Like "The Slave Hunters". For example, I was in a band in my twenties and did a lot of ridiculous things in life. So I have a lot of funny anecdotes and I think I can put them together somehow.

Q: For your next project, I heard that you were considering doing a play, not a drama or movie. That is a little unexpected.
Han: I haven't made up my mind completely yet but I am looking at a script. It's called "Fool For Love", which was written by actor and writer Sam Shepard. It's about a man and a woman who fall in love and later find out that they are half-siblings. It is sort of like the typical storyline in a Korean drama. (laugh) The play deals with the passion and conflicts between the two characters in depth. I haven't done plays since my school days, but it is a very fun process. We fight like cats and dogs but when the show is over, everyone ends up and crying and hugging, no matter how bad a fight you had. That is the charm of doing plays.

Q: You used to say that it was your dream to fly. Do you still feel that way?
Han: Um... I was really surprised when [Korean singer] Kim Gun-mo said the same thing during his appearance on [celebrity talk show] "Kneedrop Guru" but it is still my dream. I want to learn how to fly a light airplane someday. 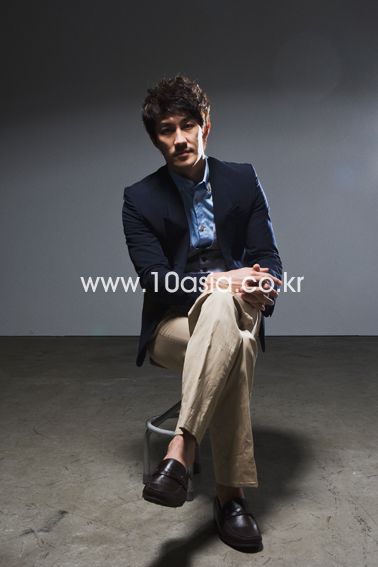 Actor Han Jung-soo poses during an interview with 10Asia.