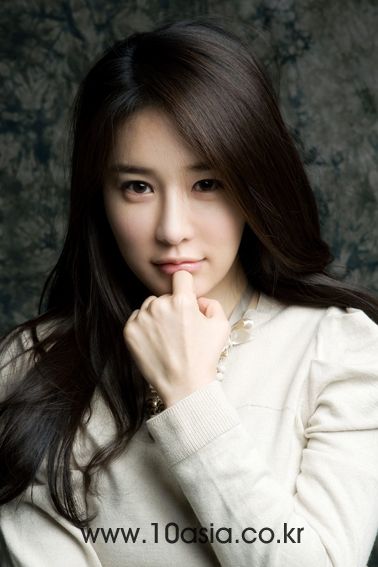 "I was chosen? Thank you so much", is was what Yoo In-na said after receiving news she was selected as our next interviewee. The public have started to become curious about her, not just because of her role in MBC sitcom "High Kick Through The Roof", but because they are curious to find out more about this actress whose popularity has been increasing. She had been in training under her agency YG Entertainment for over a year to make her acting debut at the not-so-young age of 27 so we asked her the recent change in her life means to her. 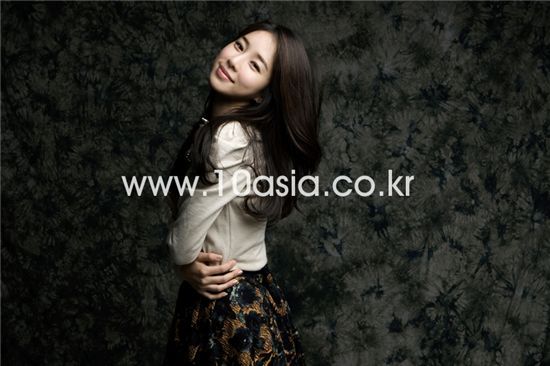 10: Your popularity right now is uncomparably high from when you first made your debut. Do you get treated differently for that? Boy band 2AM said their meals have changed since reaching No.1 on music programs.
Yoo In-na (Yoo): (laugh) I don't think I have done anything yet to measure up to the title of No. 1, so my meals are still the same. Something that has changed since my debut is that I have become more avaricious. As the public becomes more interested in me, I feel like that I have to be better and have more skills. I think that now I have to study and work harder in the things that I wasn't able to do in the past. I am much happier but my responsibilities have increased as well.

10: What is it that you so want to learn?
Yoo: First of all, I want to learn a foreign language. I am not the best but I have a lot of interest in languages including Korean. As much as I like it, I don't know much about it because it's a hard field to study. I really want to start studying Korean, English and Japanese. And I want to learn how to play musical instruments, try various sports and dances, watch all kinds of movies and read numerous books. I want to become the kind of actress that has learned everything and is capable of doing anything so that the casting director won't doubt my abilities and wonder "Do you think she'll be able to do that?"

10: Speaking of books, your co-star Lee Kwang-soo mentioned that people who read lots of books speak differently and he mentioned you as an example. Do you normally like reading books?
Yoo: I like to read but if it is a difficult book I stop reading it because I get bored and sleepy. The reason I like books is because it allows me to take a glimpse into other peoples' lives. And that's different from acting. With acting, I have to become someone other than me and that's difficult since I've lived my life as myself for a long time now and there are set things that happen to me everyday. But once I open a book, I forget about myself and become a part of another world and meet new characters. That's the fun part.

10: You mentioned that you like to read and watch movies. When you have to act out characters that are different from your usual self, do you tend to rely on the scripts to analyze and portray the character? There was an episode where you played a crazy lady and you portrayed the role of Yeo-il from the movie "Welcome to Dongmakgol" perfectly.
Yoo: I know there are many different sides to me so I try to bring them out. When I am away from the spotlight, there are other parts to me such as a rougher, dirtier and weaker In-na. But for the scene where I act as a mad woman, the director wanted me to act like Yeo-il from the movie and I didn't have much time because of my tight schedule so I watched the film for just about an hour to practice what Kang Hye-jung did before going into shoot. I didn't want to be a complete copy so I tried to change up my expression but Kang pulled off the role so perfectly that even when I tried something new, it wouldn't work. So for those who have seen it they would say, "Were you trying to be Yeo-il from Dongmakgol?" and I would think to myself, "That's exactly what I was going for". 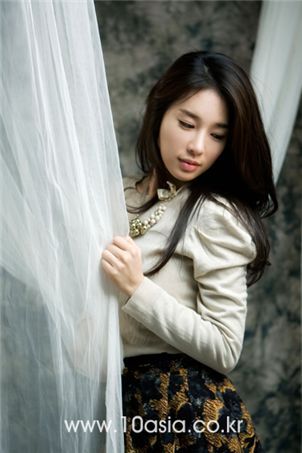 10: When it comes to acting, do you get a lot of motivation from your fellow "High Kick Through The Roof" cast members?
Yoo: Everyone knows Jin Ji-hee is a great child actress but to me, it seems that she really gets immersed in her role -- she has not distracting thoughts and hence her acting is pure -- rather than her technique being good. That's why instead of thinking that I want to learn her acting technique, I just think "Wow! She really feels what's going on and becomes Hae-ri".And I am in awe when I see Jung Bo-suk. He can be a bit on the edge but it's amazing to see how he can act completely idiotic yet goes back to being his dignified self when the scene is shot. Other senior actors like Lee Soon-jae and Kim Ja-ok are just completely beyond us.

10: "High Kick Through The Roof" must have more meaning to you other than the fact that you made your debut through it.
Yoo: I've been very lucky. I think getting to work with director Kim Byung-wook, whether it's your first time or not, is luck for any actor. I am proud of myself for getting chosen by the director who is known as the 'genius of casting' and I thank him for it. Like I mentioned before I am learning so much. Also, I have become closer to my fellow cast mates and created a bond with them. I am thankful for this too.

10: With the final episode of "High Kick Through The Roof" just around the corner, the next step you take as an actor will be important. In that sense, having played the character of In-na who has such a distinct voice and personality could rather become an obstacle for you.
Yoo: I am very worried about what will happen after the show is over. One of my concerns was my voice which I've slowly begun to love because the viewers loved it but I'm worried about that too. My voice is bit whiny to play the leading female in a Sad Love Story. I use my real voice for my role as In-na in the show but I try to match it towards the kind of character that she is, so I could also be able to sound like an anchorwoman by practicing my vocalization and change the tone. I was moved when I saw actress Song Ji-hyo acting and speaking in a low-pitched voice for the movie "A Frozen Flower". I think if you're an actor, your voice should be able to change like that too. When it comes to style, that too depends on the person and how they want to dress themselves. My stylist tells me that how I act is what changes me. Maybe for my next project I can play the simple kind of underdog so if there are any directors looking for that kind of actress, hire me. (laugh)

10: You made your debut ten years after deciding to become an actress. What helped you to endure the wait?
Yoo: No, it's the opposite. I didn't work hard because I had any certainty but the assurance I had was the effort and hard work that I was putting into achieving it. My mother would always tell me to set new goals every three days. 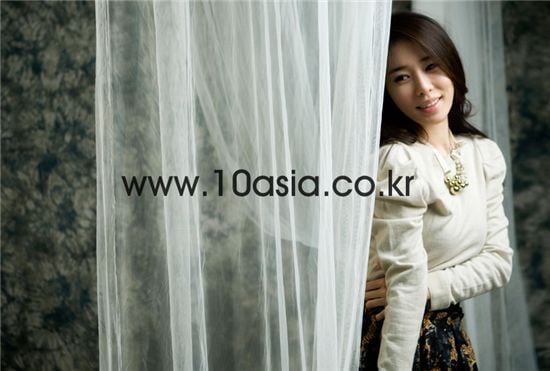 10: If you could go back to the time before you became an actress, would you go the same path or follow a different one?
Yoo: I don't think I would follow the same steps. It was okay when it gets hard and because of those hardships I was able to have gained many things but I wish I would have started younger because then I would have been able to have play different roles. People age naturally and even though I would like to play that role, I wouldn't be able to. If I could only turn back time to five years ago, I could have done more roles... but if I think about that, there is no end to it. If I made my debut at 35, I would have wished to have started at the age of 28.

10: So what did you gain from making your debut a bit late? What are the advantages?
Yoo: I think about that a lot. If I was 20-years-old and I was in a difficult situation, I would probably cry or complain about it. But the 29-year-old me gets over a problem by telling myself what situation I'm in and how I should handles that situation. I see the world as a more relaxed place now.

10: Honestly, the important thing is not how early you start working but how long you last in the business. You mentioned that you wanted to work as long as Lee Soon-jae and build up on your resume. If you received the lifetime achievement award what would you say?
Yoo: I'm not sure if it was Mr. Lee Soon-jae who said it but one of the senior actors who previously received the award mentioned, "I think the only reason I was given this award is because I am old. But thanks anyways". At that moment, I felt that it is about the amount of experience, in years, that someone has. I would probably say, "I believe you gave me the award because I am old but I feel that for many years you have watched me act so please continue to watch".

10: That kind of the life experience means you're growing not only as an actor but also on a personal level too. Do you want to become a good actress and person at the same time while you're on this job?
Yoo: I have a greater urge to become a better person. Since I am in the public's eye, I shouldn't lead a life making mistakes. I want people to think they would like to become like me because of my great personality. That is why I feel I should lead a good life.

Actress Yoo In-na of MBC sitcom "High Kick Through The Roof" poses during an interview with 10Asia. 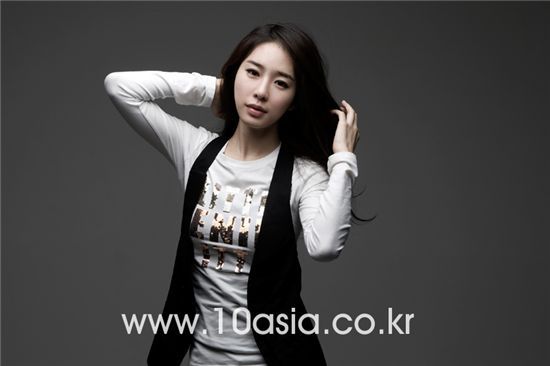 Actress Yoo In-na of MBC sitcom "High Kick Through The Roof" poses during an interview with 10Asia. 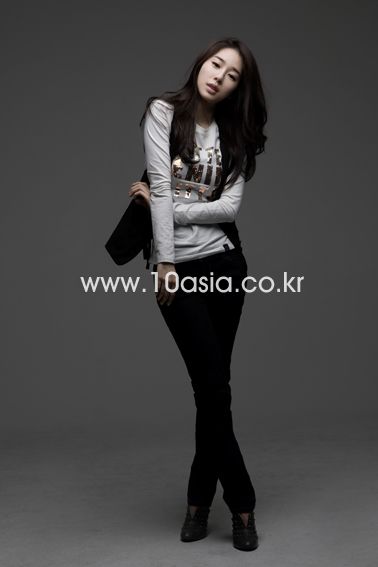 "[INTERVIEW] "High Kick Through The Roof" Actress Yoo In-na"
by HanCinema is licensed under a Creative Commons Attribution-Share Alike 3.0 Unported License.
Based on a work from this source