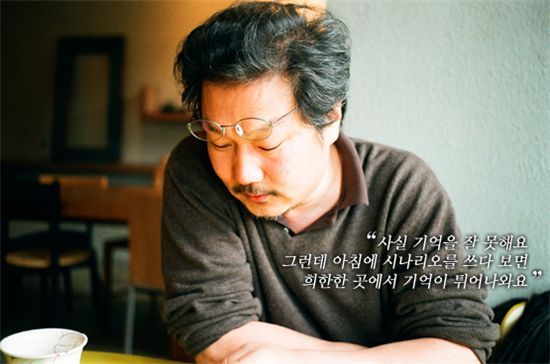 Beck Una: I think you have good eye for observing or remembering people, looking at how you pick out the characteristic of the actors.
Hong Sang-soo: I don't know. But I don't remember some aspects to the point it's embarrassing. Like everyday things, people's faces. My memory is weird. I had said so jokingly in my film "Night and Day" too but I think it's genetical. (laugh) My mom once didn't recognize who she had worked with for tens of years. And I've experienced such shameful moments too. I honestly am not good at memorizing things that I tell myself to. I think I have some sort of resistance to things I have to memorize. Whatever it may be, not liking what you have to remember or hold onto purposely. I think my brain doesn't want to remember things that my body hasn't already taken in naturally. But when I'm writing scenarios in the morning, memories of the oddest moments just pop out from nowhere. Something I may have seen from more than several decades ago, what I saw in a magazine, what someone said a few days ago -- all sorts of memories suddenly pop into my mind.

Beck: There's a scene where Sung-ok (played by Moon So-ri) gives Jung-ho (played by Kim Kang-woo) a piggy back ride, even when they're not going through a great breakup. But this unexpected action somehow even seemed cool and interesting.
Hong: I had heard from somewhere about someone giving the other person a piggy back ride when they were breaking up. With Sung-ok... this woman is someone who is disappointed with mankind in general but is healthy and strong. She's giving him a piggy back ride but ends up falling over because the man is too heavy. Everyone knows right away that he'll be too heavy for her but she is someone who still goes for it regardless.

Beck: Didn't actress Moon So-ri ask why she does that? (laugh)
Hong: There's no reason not to be able to understand it either. I don't really do a lot of explaining to my actors unless they have a frustrated look in their eyes when they're reading their script or if they ask. But Moon didn't ask me anything.

Beck: There have been a variety of logical analyses about your films so far and they will continue to come out but I rather think that you rely on intuition to make your films. Just like when the woman gives the man a piggy back when they're breaking up -- you can't exactly explain why but it just makes sense when you get to that point.
Hong: I just write something in the morning, the actors read it over it, snicker about it, then they memorize their lines for about 30 minutes, rehearse for another 30, and then go into shoot with that. But when I write a scenario in the morning, I do have an idea of the impression I have of the actor that I want to include in the film. It gets incorporated into the actor's lines and actions.

Beck: I think the public has always had distinct likes and dislikes when it comes to the characters, relationships, circumstances and emotions in your films. They don't deny the existence of the reality portrayed in your productions but you made them see what they didn't really want to see in particular. As if they had felt they were sort of rigorous or repulsive. But from a certain point on, especially starting with "Ha Ha Ha", I think your perspective on the world started to change bit by bit. It's reflected in how there's a line in the film that says, "I want to see only the good things".
Hong: I don't know. I'm not sure starting when, but it's just something I had been thinking about. There are people who are good at trusting others and try to look at the bright side of reality. I envy such people and think they don't come by often. I myself am not someone who is like that at all. But I don't live in this world alone so I've purified myself in my own way and gotten better [at trusting others]. I still have a hard time with a lot of things and many more will come along the way. But I'm improving because I'm realizing how the extremeness of my way of thinking represses me. Trying to see only the good things is still quite beyond me. Right now, it's at the point where I'm aiming to live my life in such a way, that it looks better. But I wouldn't dare say that I'm exactly living my life like that.

Beck: There was a new type of scene in "Ha Ha Ha" which has never been seen before in your films. There would be a man and woman who are always engaged in sexual intercourse, or like or love having sex, but their emotions would be off either in terms of timing or depth. This film however, showed a man and woman who felt similar emotions toward each other at the same time. I had never expected to see it happen in your films so I was a bit taken aback. (laugh)
Hong: To me, what was important was whether the people in my film actually exist in reality or not. Of course, I knew in the past too that such people exist. But I had never desired to include such kind and warm-hearted people for my own movies. Now though, I think I want to pull those characters into my films and position them throughout the overall story. I think I had pictured what kind of chemistry Yu Jun-sang and Ye Ji-won would have to create which kind of emotions when I decided to have them star as a couple in my film. They're both angelic people.

Beck: Everyone puts in their best effort or displays their best acting ever through "Ha Ha Ha" but I think the audience will be in for a surprise with Yu in particular. What is your impression of him?
Hong: Yu is... a kind person. But I think it's quite boring to say such things. Words never explain people well enough. When you're asked your impression of someone, you'll give your answer in a few words but that describes not even one percent of what you felt about that person. And it gets distorted in the process of you trying to organize your thoughts. So it's needless to say this and that on what you feel about someone because I'm working on a movie with 100 percent of that person, in his or her entirety, so there's no need to cling onto that one percent definition you have of that person.