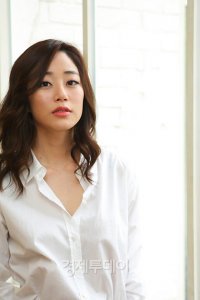 The main female character of popular drama "I Am Happy - Drama" (SBS), screen star Yoo Ji-tae's lover, an actress who does good deeds, a fashion trend setter There are many phrases that can describe her. This week's guest is Kim Hyo-jin. She was in a fluster as she came into a small Japanese restaurant, saying that filming on set went longer than expected. The pre-ordered noodle and fried dishes came out then and the environment was perfect for drinks. She has grown from a high school star into a charming actress who takes care of work, love, and community. Kim Hyo-jin's charm twinkled during the three-hour interview.

Arguing with him? There's not enough time to love

As soon as she sat, she drank, saying, "Drink Talk has to start with a refreshing glass of drinks". She's sweet. "I turn red with even one glass". She grimaces but takes a sip without a word. Within 3 seconds, her face flushes. I'm a little sorry. "My limit is two glasses of wine, so it's not that I can't drink. I'm the type whose whole body turns red. My face also swells. If I take a sip at a business dinner, they don't really ask more from me".

She is getting a taste of happiness she never knew through weekend drama "I Am Happy - Drama". She has only been female leads in movies and miniseries. "I've always heard that home drama atmospheres are good, but now that I've experienced it, it has exceeded my expectations. We all think it's unfortunate that it'll be over soon and have an outing every week. Kim Yong-rim buys wine, Lee Hwi-hyang brings side dishes like hard-boiled fish, and we take turns drinking and eating. When I think of parting, I already get tears".

There are frequent affectionate scenes with married actor Lee Hoon. It seems it would be awkward, for there are many scenes where Lee Hoon attempts at affection but Kim Hyo-jin knocks him down. "It's actually fun. We always think about how it would be more fun. We have many rehearsals, and I think that's how it becomes so natural".

Her affection toward Seo-yoon, a very down-to-earth rich family's daughter, overflows. "It's beautiful how she knows how to support her husband. She also knows how to hug her mom warmly when she's troubled. While acting, my personality also became brighter and comfortable. A senior said that I was tactless, but that's a little harsh, isn't it"?

We're curious about the behind story on how they became lovers. "We've known each other for a while. We met through a commercial and we kept in touch. I had a chance to stay in New York for half a year, and that's when he first let me know. He said that he felt my absence while we were apart"

Yoo Ji-tae is a tender boyfriend. He always takes care of 100 day, 200 day anniversaries. "On White Day, he calls me outside and has a cake prepared". They both enjoy modest dates more than extravagant ones. Of course they both never gifted anything expensive or famous. "We're not the type to buy it. If we do buy it, we won't accept it".

However, they're not stingy about food. "He's a gourmand. If there's a good place, he takes me there. Our hideout is Tuesday Wednesday Thursday Cafe in Han-nam. Japanese restaurant Mitania has good sushi. We eat spicy rice cakes at the place across from Cine City. They put long rice cakes and cut it on the spot. It's addicting". Have they ever argued? "Will I be hated for saying this? We don't even have enough time to love, and I wonder how to find the time to fight".

The couple is happier because of similar hobbies. Their usual date consists of watching shows or movies and talking about the work. They're both scholarly. Yoo Ji-tae is currently producing a short film and expanding his boundaries. Kim Hyo-jin is majoring in movie theory at graduate school. "You don't study and give it to someone. Being an actor is an instable job. If you don't expand your limits, there's no where to stand. When the movie industry gets bad, you won't even get any scenarios. I don't think you can sit around, eating the fruit that falls from the tree".

While talking, a small fly falls into her beer glass. Saying, "Oh, it's a fly", she takes it out with her chopsticks and puts the glass back to her mouth. I gape at her actions that differ so much from her sophisticated image, and she laughs and says, "Well, in Africa, Kim Hye-ja picked away a cockroach and ate it again".

Kim Hyo-jin has read Han Bi-ya and Kim Hye-ja's books and developed a vision about community service. Now, she has become a star who receives the encouragement of those she always respected. She used to travel to go to compassion service with Yoo Ji-tae, but recently she started going alone as a World Vision publicity spokesperson. In the beginning of the year, she went to do service work in Africa, and also did it locally. "I changed a lot with the experience in Africa. A lot of my greed is gone too. There are so many things I'm blessed with my heart has become plentiful".

She also had complaints about her looks. "I hear that I'm not very photogenic on camera compared to my real appearance. I think it's because I don't have double eyelids. Before, it stressed me. Now, I don't mind. There are people who ask me if I split my eyes, but I have never done anything to my face.

Bought clothes she liked after contemplating for a month

The phrase that described Kim Hyo-jin for the longest time is 'fashion trend setter'. We think she'd be addicted to brand names and shopping, but no. She doesn't like brand names and doesn't really like shopping. "I wear them enough while working. When I buy things, I don't do it on the spur of the moment. If I pick something, I keep my eye on it for months and if I still like it, I buy it. And I use it for at least ten years. If I buy it right when I see it, I feel like I'll get tired of it and regret it".

Of course, as an actress, she has interest in it. "I believe an actress can be unfashionable. They have to know what kind of clothes to wear at what time, and have an eye for clothes. They need communication with the coordinator". But she's not stingy about buying books. Even during her busy time with dramas, she reads novels, movie magazines, and weekly news magazines.

She's the style to shop and travel by herself. "Last year, I traveled to Turkey and received a travel visa and went to Iran". She says it as if it's no big deal. "There are many who were worried for me, but there, they think our nation is more dangerous. Because of North Korea. Isn't it funny"?

If it's for work, I'll do revealing scenes as well

Her charm is revealed with each word she says. It might have been a stupid question but I asked how she would like to be when she's thirty. "I want to know acting. I'm probably better now than I was five years ago. I think acting is very difficult. No matter how hard I try, I feel like I'm trapped in my boundaries. I want to believe that I will get better as I get more experience. I also dream that I'll be someone who can play any role. Before, I was nervous about revealing scenes, but now, I think you have to do it if necessary. I want to work in an ensemble, seeing things as a whole and thinking of other actors as well. Don't I have to get married when I'm thirty as well"?

Born in 1984, she debuted in 1999 in the magazine 'Cindy The Perky'. She played the lead female role in movies "The Legend Of Evil Lake", "Everybody has Secrets", "Mr. Wacky", dramas "Magic", "Ice Girl", "Hong Kong Express", and many others. At an age where she should be most arrogant, she understands and lives out the wisdom that life has taught her. She's beautiful from the front, but she is more beautiful from the back as she walks toward her goal.

"[Interview] Into Kim Hyo-jin's down-to-earth charm"
by HanCinema is licensed under a Creative Commons Attribution-Share Alike 3.0 Unported License.
Based on a work from this source