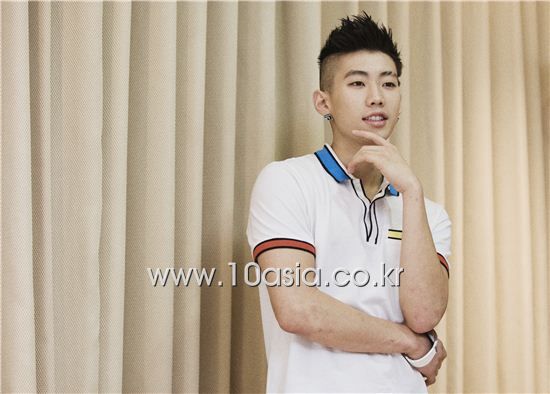 Singer Jay Park poses during a photo session of a press conference ahead of performing at the "Summer Week&T" music festival held at the Naksan Beach in Gangwon Province of South Korea on August 7, 2010. [Chae Ki-won/10Asia]

We met with Jay Park. This seems to be the only way to describe his press conference held at Naksan Beach in the Gangwon Province of South Korea on August 7, where he was appearing in public officially for the second time.

The 23-year-old singer was also just hours away from giving his first stage performance since going solo, taking to the stage of the two-day "Summer Week&T" festival with his act right before Korea's king of hip-hop Drunken Tiger and two before American hip-hop star Lupe Fiasco.

There has been and continues to be much controversy and rumor surrounding his departure from popular boy band 2PM late last year, especially surrounding his sudden expulsion from the band forced on Park by agency JYP Entertainment -- they said it was over a "huge personal wrongdoing" which was enough to null their original plans to forgive the singer for posting remarks such as "I hate Korea" on his MySpace account before his debut.

But Park is back in the Korean entertainment scene and already pursuing a variety of endeavors. He has signed with major talenthouse SidusHQ, is filming Hollywood b-boy film "Hype Nation 3D", and released his solo debut single "Count On Me". He is said to be in talks for a drama and musical as well.

Below are excerpts from the press conference where Park talked about his comeback performance, music, dancing and acting.

10: Why did you decide to make give your comeback performance at a hip-hop festival and not through a concert or television?
Jay Park: Lupe Fiasco will be performing today. And so will Tiger JK. I wanted to stand on the same stage as them. But I'm worried because I've been coughing for about a month. I can't cough when I'm not even going to be dancing... I've been to the hospital too and they said it might be because of the smog on set of the movie. They told me to just drink lots of water and take medicine. (laugh) But it isn't getting any better.

10: This is your first time taking to the stage solo. How will the performance be different from when you were in a group?
Park: I don't dance at all while singing this time. I thought it would be weird if I dance while singing "Count On Me". And there's a song called "Bestie" that I wrote the lyrics for and my friend composed. I'll be singing that too. And I thought I shouldn't not dance at all so I'll do a bit of b-boying with my friends.

10: You resumed your activities after announcing "Count On Me" which is a rearranged version of B.o.B's "Nothin' On You". Did you have any expectations or feel pressure about this?
Park: I actually wasn't expecting anything at all. And there was no pressure. I posted up "Nothin' On You" on YouTube, right? A lot of people enjoyed watching it so Warner Asia contacted me, asking if I wanted to do it and I of course said I would because I like B.o.B. I'm thankful that my fans like it so much.

10: Didn't you have a hard time while in the U.S.?
Park: I was upset that people around me were having a hard time rather than me having had a hard time. I was going to be okay because an opportunity you lose can always come back but I had a hard time because people around me were having such a hard time. And I had never been thinking of a particular point in which I'd come back [to Korea]. I think I've been going along with the flow. "Hype Nation 3D" asked me if I wanted to do a movie and I felt that it would be good to do it with my b-boy team AOM which is why I came.

10: But then you signed with an agency in Korea and resumed your activities? What prompted you to make such a decision?
Park: I actually think things don't work out if the only reason you want to pursue something is to see success. I am so grateful of my fans. That's why in whatever way it is, I want to influence them in a good way. I don't think I would've wanted to come back if it wasn't for my fans and I'm going to try to repay them in every way possible while I'm pursuing my career. My fans had said they want to see me back on stage more than anything.

10: In that sense, weren't you worried about your fans boycotting your former agency?
Park: I'm very upset about that. I don't want anyone to like me to the extent that they'll hate someone else. I wish everyone would get along -- I don't like people who hate other people without reason and say bad things about them. I wish my fans would calm down a bit (laugh) and that everyone would get along. It really makes me upset when I see fans fighting each other because it's due to me. I think life is too short to live feeling ill emotions. That's why I want to think of everything in a positive light and I tell myself that even if something bad happens, it'll work out in the end and become better after time passes. I want to show these thoughts of mine to many more people.

10: Why do you think your fans love you so much?
Park: Uh... (laugh) I have a lot of female fans who are older than me. I think they feel sorry for me so they like me in a maternal way. They want to console me and defend me like a mother? (laugh)

10: But over time, there will be people who support you but also people who dislike you. How do you feel about that?
Park: I don't pay attention to that. It's not like they know me personally. I try not to pay attention to people who say bad things about me and see me negatively. I think I should just work hard. And be good to people around me, good to my fans, and work hard to help everyone and influence people in a good way. I think that's all I need to do.

"[INTERVIEW] Jay Park - Part 1"
by HanCinema is licensed under a Creative Commons Attribution-Share Alike 3.0 Unported License.
Based on a work from this source