[Interview] Jung Woo-sung "I feel like I'm a man now" 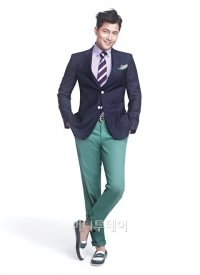 "I just filmed it excitedly? That's all a lie".

Jung Woo-sung is waving his had. He's talking about the action movie "The Good, the Bad, the Weird", which cost 17 billion won to produce. Director Kim Jee-woon, Song Kang-ho, and Lee Byung-hun all said, "It was tiring but I filmed it excitedly", but Jeong said, "They can only say that because it's over".

If you watch "The Good, the Bad, the Weird", which premieres on the 17th, Jung Woo-sung's words are not an exaggeration. Jung Woo-sung plays Do-won, a hunter of prize money, and he is as good as a stuntman. One cut shows him jumping out of a window of a train, rolling on a slope, posing and firing a rifle. An exclamation of surprise automatically comes out.

"There was no stunt double. Put in simple words, it was crazy. Because I risked my life. You know, if you go through a lot, the echoes of the memories are stronger too. When I watch the movie that I filmed like that, I get excited too".

While filming, Jung Woo-sung injured his left wrist. He was riding a horse with his hands off the reins, shooting a gun, when the horse jumped and he fell. The scene where Do-won is flying through the air with one hand on a rope and one hand on a rifle was completed without a cast on his broken wrist.

"Even though it hurts, I forget it when I start filming. There are times when you have to risk everything as if it's your last work. I think "The Good, the Bad, the Weird" was like that. Because I wouldn't be able to convey the tension through the screen if I hesitate or compromise with myself because I know there will be another work".

Jung Woo-sung's unexplainable good looks was one reason why he suffered so much. It was because a stunt double didn't have the same 'pose' as Jung Woo-sung did. Except for the scene where he gets off the horse, which he couldn't shoot because of his broken wrist, he had no stunt double.

Honestly, Jung Woo-sung is so charming that even if he just stands there, it becomes a scene. His wide-brimmed cowboy hat, caramel-colored coat and boots, and the rifle in one hand tell you that this man meant to look good.

"I feel no pressure about judgment on my looks. He's charming even if he stands there. I wonder how big of praise that is. There are so many actors who try hard to hear that praise. It is my part to add to that and show you more".

'The Good' Do-won is the role Clint Eastwood played in the western film "The Good, the Ugly, the Bad", which became a motif for his movie. Although Jeong may have felt pressure to portray a modern version of Eastwood, Jeong had no intention of imitating or competing against Eastwood.

"He's someone you can't even compete against. I can't even imitate Clint Eastwood's trademark of the frown with a cigar in his mouth. He's him, and I'm me. I didn't even look at old western movies because of "The Good, the Bad, the Weird". I just tried to do it as I would".

Jung Woo-sung's plays a lonely character in his next work, a Korean-Japanese joint drama "City Hunter". His character resembles the one in "Beat", which helped him rise to stardom. In the manga, his character, Ryo Saeba, is an absent-minded killer who likes pretty girls only to be hit with a 100-ton hammer. If the girl is ugly and doesn't have a nice body, he doesn't take her as a client.

"I make absent-minded jokes on set. You know deserted island jokes? If I say one word, everyone around me disappears. But I still get up again (laugh).

I met the original author and he said the main character has to be the sexiest guy in the world. That's why the original author doesn't like Jackie Chan's "City Hunter". Truthfully all guys are like that. If we see a pretty girl, our eyes follow her".

If we see "The Good, the Bad, the Weird", we agree with the author's judgment. Jung Woo-sung, who spoke of the loneliness of youth in "Beat", is now in his mid-30s, but his sexy charm has become stronger. That's why the female audience watches the action movie and can only respond "Jung Woo-sung is amazing".

"Long ago, I believed that if I turned 30, I would realize on my own that I was a man. But even in my early 30s, I still didn't have that feeling. Now, in my mid-30s, I realize that I'm a man. I'm starting to feel that I'm reaching my peak".

That's why for Jung Woo-sung, this is a time for no rest, a time when he has to work harder. In the movie, Song Kang-ho's character, train robber Tae-gu, asks Do-won what his dream is. Do-won doesn't get to reveal his dream, but Jung Woo-sung said, "My dream is to be a director. I also want to develop into a better actor". He said that only after he's done with his journey, he can look back and see how his expected journey and real journey were different.

So Jung Woo-sung checks into the office of his own movie company and films movies. Is it coincidence that he received the same role as Clint Eastwood, who started out as a handsome actor and is now a Hollywood giant? We anticipate Jeong's transition as he ages even more.

"[Interview] Jung Woo-sung "I feel like I'm a man now""
by HanCinema is licensed under a Creative Commons Attribution-Share Alike 3.0 Unported License.
Based on a work from this source