[Interview] Kim Heung-soo, "26 years old, stress of being at border between youth and adult" 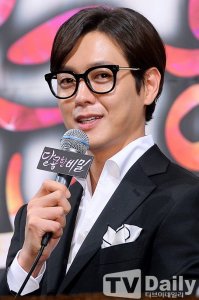 It seemed that Kim Heung-soo had a lot of worries. During the whole interview, he spoke slowly and chose his words carefully. I thought his answer to a question was over so I would be thinking of the next question, but his answer would continue. It was like listening to a 'never-ending story'. If Jae-su, the youngest son in "More Beautiful Than a Flower" were to grow a little more, he would have been like him.

"I'm not very good at lying. I told you the truth about everything so you pick and choose".

After taking a break after 2005 SBS "Princess LuLu", he came back with MBC weekend drama "Ggak-du-gi". In the beginning of this year, he also starred in three other works, including movie "Hellcats", "Like Father, Like Son", MBC season drama "Special Investigation Team". Because of his busy schedule, he wasn't able to publicize "Like Father, Like Son" well, and he felt unfortunate for that.

"Special Investigation Team" was a season drama that ended on the 29th, and it was the last project of a series of season dramas by MBC. It tried to release it in seasons, like America does, but because it was aired 11:30 pm, the project unfortunately had to end.

It was the first time since his debut that he had a 'business worker' role, where he had to wear a suit and go to work. Gong Cheol-su, his character, is an insurance investigator who barely enters the insurance company after cramming for three years. With his seniors, he reveals the truth about insurance fraud, but because he's newly hired, it's hard for him. As Gong Cheol-su learns his trade, he slowly discovers himself changing into an insurance investigator. This work was a stepping stone for Kim Heung-soo, who always played characters like a rebellious teenager, jobless adult, or youngest son.

"The best part about shooting this drama was wearing a suit and going to work in a car. In a way, it seems like a normal role, but I haven't lived that kind of life so it was a big challenge for me".

And since we were on the topic, Kim Heung-soo talked about his disappointment about not being able to live a normal life. "My junior high days are the last memories I have of my school years". He debuted as a magazine model and began acting in 1999 in "School 2". He was 16 years old then. If he was a normal youth, he would have had memories of his school days but they don't exist for him. He cocked his head when I asked him if he had thought of going down another path.

"I don't regret becoming an actor. I'm just disappointed that I wasn't able to make more memories at school. I want to study more too. I experienced things that my friends never have, but I also missed out on a lot too. If I hadn't become an actor, I would have had to find another fun line of work. The thing I do is not important to me. It's important that I do it willingly and work hard. But now, acting is fun and I love it".

Because he debuted at a young age and has been ten years since his debut, he is still an actor who 'has potential'. He expressed his patience and frustration at his unstable position. His unfinished military service is an addition. It was surprising to hear him so unsure about his future, like a growing adolescent.

"Everyone must have worries but my worry about the work I've done for such a long time is growing. To an actor, 'natural ability' for stardom is needed. Being an actor is a job, and you have to earn money by working When I see older actors resting after coming back from the military, I get even more frustrated. These days, I think a lot about where I am. While resting for the past two years, I don't think I have the natural ability for stardom and I worry that I won't get any chances. I didn't have those worries before but I'm distressed that I suddenly have so much to worry about".

As tall as he is, 26-year-old Kim Heung-soo has depth to his thoughts. When asked if it could be puberty, he joked that it was beyond puberty. He is preparing a movie for his next work, and he revealed his opinion about the frozen movie industry.

"I think the movie industry has become inactive. The movie "Like Father, Like Son" was filmed when the movie industry was booming, but it premiered late and not shared with many audiences. I'm hurt hearing that it's not a good investment, even with top stars. I would like the effort of many people to bear fruit".

"[Interview] Kim Heung-soo, "26 years old, stress of being at border between youth and adult""
by HanCinema is licensed under a Creative Commons Attribution-Share Alike 3.0 Unported License.
Based on a work from this source