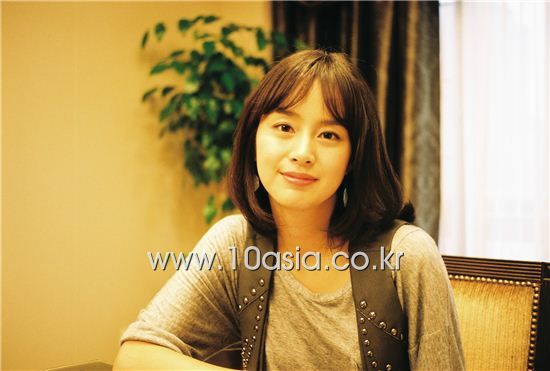 Do you know Kim Tae-hee? Well, of course you know her. It is the name of she who has been endowed with beauty as well as intelligence, attending Korea's top school Seoul National University. To some she has been the object of admiration while to others, the goddess who must be worshipped unconditionally. And at the same time, she is also the one who has been publicly bestowed the harsh and pitiless judgement that she is pretty but without appeal or smart but bad at acting.

But alas. The nearly hour-long conversation with the actress in person revealed that she is not the Miss Perfect from another town but closer to being the frank and honest girl from next door. She was not needlessly modest, did not set forth any ungrounded pride, talked in a straightforward manner with a simple personality which knew what to acknowledge and what to admit to, proving she was not a unicorn which exists only in imaginations and myths, but rather a healthy stallion which had just started to gearing up her horsepower. This is just the first record of the first step we have taken in getting to know about this lady whom we had said we know so well but did not actually know much about.

Beck Una: You have taken on the role of a jockey in upcoming film "Grand Prix". It wasn't easy imagining you playing the character at first because a sports drama and Kim Tae-hee? You don't come off as being the dynamic type.
Kim Tae-hee: Well I actually didn't feel it at first either. (laugh) But I had established a sense of trust with director Yang Yoon-ho while working with him on TV series "IRIS" so when he proposed the role to me, I was able to take it on without much hesitation.

Beck: Do you usually make decisions quickly?
Kim Tae-hee: No. I used to contemplate hard and long over every decision I make. I'd ask here and there, and gather the opinions of my managers. But I don't want to do that anymore. I've come to want to quickly challenge myself at various roles in a more comfortable state and with more ease. That's why "Grand Prix" is a case in which I made my decision quite quickly. I do prefer quiet melodramas, romantic comedies or moving stories over thrillers and action pics. I think the movie will make you think about life again and be unexpectedly cheerful.

Beck: Are you in charge of the 'cheerful' element? (laugh)
Kim Tae-hee: (laugh) No. I shouldn't try attempting at making the audience happy with comedic acting. It's something that I have yet to become confident and a sense of humor is actually an aspect that my personality lacks. But I was under the vague certainty that a new type of melodrama could be formed with actor Yang Dong-geun and that that would contain a humor of element that the audience would be able to laugh at.

Beck: Jockies could seem like they're racing on their own but it's impossible for that jockey to do well without having good chemistry with the horse. I'm assuming that you may have experienced a similar process during your life. Someone who had always been told she is good at everything now has to pay attention to another person's work and has put herself into the world of acting in which one cannot do anything alone. That must've been similar to riding a horse.
Kim Tae-hee: I guess you're right. It's similar in a way. But I wasn't good on myself either. (laugh) Looking back on my life, I realize that I've received a lot of help from people around me and in many cases, I have had to be the only one who does well. But I do think that I felt it's easier to do things on my own. There's a Chinese idiom which says horses are 70 percent and the jockeys are 30 percent, meaning that no matter how talented the jockey is, he can't do well if the horse can't do as well. It's the jockey's role to harmonize with the horse so that it can race to its fullest capacity. And it seemed that it's the same with acting as well. It's not about doing well alone -- you can only get good results by working well with the person you're working with. Right now, it seems that I've come to realize more of the fun involved in working with someone and to enjoy it. And I've come to open up myself more. 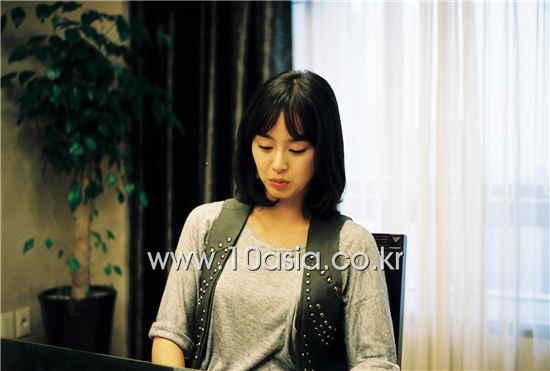 Beck: Was "IRIS" the turning point?
Kim Tae-hee: Yes, I think so. Even before I took on "IRIS", I knew it was important to work in harmony with other people but I don't think I had put it into practice. I changed a lot while doing "IRIS".

Beck: I was very amused by how the casting for "Grand Prix" turned out. Yang Dong-geun is an actor whose acting has no set 'map'. He is someone who will show you a splendid scene on a road he comes across while wandering about aimlessly. But on the other hand, Kim Tae-hee is an actress who I thought moves her body only after coming up with a logic for it within herself. I was curious to see the chemistry that two completely different people would create.
Kim Tae-hee: There's a lot that I learned while working with him for the movie. We're extremely different as well. Yang is the type that tends to tell every story in a very philosophical way. For example, he would explain, "Tae-hee, here's an object here that looks like this. But you can't act it out as if saying, this is this..". Um, it's not that I roughly don't understand it but... (laugh)

Beck: Then when you hear such things, are you the type that says, 'Ah, that's how you think', and just let it go?
Kim Tae-hee: No, I keep asking, digging in deeper. (laugh) So I asked him what it means and that I vaguely understand but not completely. I'm the type that will say I know only when I know 100 percent.

Beck: So when you asked like that, would he end up telling you in detail?
Kim Tae-hee: No (laugh), he wouldn't tell me. In a way, it could be something that can't be explained. (laugh)

Beck: But even if you're the type that won't become sure of knowing until you are completely sure, when you're filiming something, that is an environment won't wait around for you to understand completely.
Kim Tae-hee: That's right. So Yang told me to go for it even if I don't understand. But I can't really do that when I don't understand or am sure of why I'm doing or saying something.

Beck: How about just throwing yourself at the camera?
Kim Tae-hee: I sometimes try doing that but it isn't easy. And this is one of the things I had a hard time with when I first started acting -- I would express an emotion being sure that I was feeling that emotional state but people on the outside would accept it differently. I hadn't calculated the fact that no matter how sincerely I feel something, it might not be delivered that sincerely to the viewer.

Beck: So do you think you are better at calculating that out now?
Kim Tae-hee: I'm still far from it. (laugh) I'm the type that says sincerity is important to acting while Yang is somebody who says 'acting is about putting on a show'. I think you need both. And I lack in putting on a show.

10: But failing to put on a show, or in other words, show flexibility, is often one of the criteria that people look at in judging your acting skills.