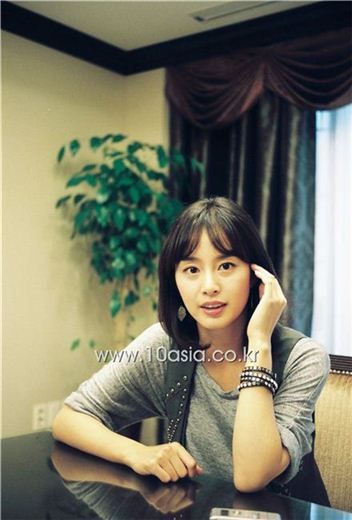 Beck Una: In "Grand Prix", the woman who always seeks victory first goes through the hardship of losing the horse she loves in order to discover the joy of spending time with her horse. Ultimately, nothing that is precious comes free. What have you probably lost from the point you started acting to now where you have just started to feel the joy in acting?
Kim Tae-hee: What you've lost is probably ultimately what you've gained. I wouldn't know as much as I do now or be as strong if I had been hurt less and led an easy life. What I have lost is... privacy? (laugh)

Beck: Well it's true that as much as your life has become abundant, it has become tiresome as well.
Kim Tae-hee: I'm not the type that regrets easily. I think I'd take this road again, even if I could go back into my past. Should I call it fate? Always. I like how I've gotten where I am right now. I really don't have moments where I regret wishing I had done something in the past or reminisce that a certain point in my past was great. I'm the type that forgets everything and my memory isn't that great either.

Beck: Then do you instead have a lot of hopes for your future?
Kim Tae-hee: I don't set specific plans but I do dream what I'll need to do to become happier than now in the future.

Beck: Are there moments where you often feel that you are happy while you're acting?
Kim Tae-hee: Not always. I rather feel an ecstasy from when I overcome the difficulties I face from acting. And that moment doesn't come every time, which I think makes it even more special. These days, I feel quite often that acting is a very attractive job. There's so much to gain from watching movies so the fact that I can take part in such work seems to be valuable and I think it's attractive in that it influences a lot of people, that I can provide hope for my fans, and more than anything, can be of help to someone.

Beck: What is the most selfish form of joy you get out of being an actress, outside of giving joy to your fans or being able to sending messages of hope through movies?
Kim Tae-hee: That you can have as much free time as you want if you want it? If you work at a company, you'd have a set number of days you can take off per year. So I think the biggest advantage is that you can make and plan the time you want to spend investing in something outside of work. I guess you could say it's the merit this job has compared to other jobs?

Beck: I guess you're not the style that feels comfortable living according to a set system?
Kim Tae-hee: I don't think I would've been able to be an employee of a company who has to go to work every single day. I would have been tardy everyday. (laugh) And since I'm the type that isn't good at repeating things and becomes very bored and frustrated about such work.

Beck: But when we think of Kim Tae-hee, we rather think of someone who is probably good at pulling off set tasks.
Kim Tae-hee: I was late all the time in school as well. (laugh) It's just that I had held back because despite my true nature, that was the time period during which I charged forward without looking back with the sole goal that I have to go to college. 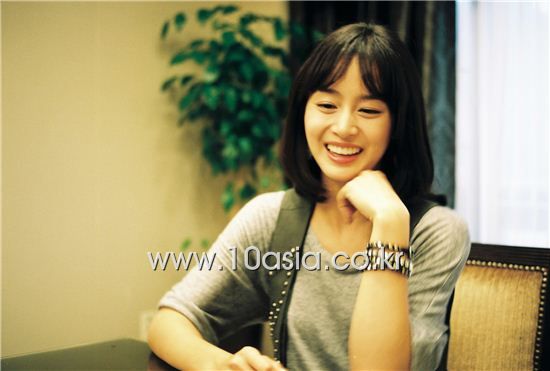 Beck: So like a racing horse, you're the type that doesn't look around when you're concentrating on one thing.
Kim Tae-hee: Yes! I think I'm talented at that. (laugh) Really going at one thing.

Beck: But it's true that "Grand Prix" is a relatively safe family movie and it doesn't seem as though you're taking on a huge challenge.
Kim Tae-hee: Really? I guess you could think of it that way since I didn't play a particularly complex character or genre but it was a challenge for me in its own way. Up till now, I have been in works where the male actor has larger weight or in a way played roles which are safer and call for less responsibility, but it's different with "Grand Prix". Yang Dong-geun's character was rather allowed to go in and out of the movie but I couldn't -- I was there from start to finish but I didn't have a impactful scene either so the role I played was a challenge in that sense. (laugh) I think I'd be very glad if people would consider me attractive even after seeing such sides to me.

Beck: Are you not curious about doing other genres?
Kim Tae-hee: I quite enjoy watching things that other people consider immature. (laugh) I like immature things, have the sensitivity of a girl, and have a lot of romantic imaginations. And while it may show that I have no sense of reality, I even dream of prince charming riding up to me on his white horse. Like in "Bridget Jone's Diary"! I completely absorb myself into those movies. I think I probably decided to take on drama "My Princess" after watching that. It's supposed to go into shoot starting October and set to show starting around January of next year but it's far from my image or personality so I doubted whether I'd be able to pull off the role. From when I was young, I'd been on the serious side, I'm usually not talkative and am rather tough and like to move my body around. But my character in "My Princess" is brazen, talks a lot and is witty. I do not think however, that I am taking on a new type of role because I want to change. There is that aspect within me to a certain extent so I'm going to try and pull that out as much as I can.

Beck: This may be a stupid question but what do you think acting is about? Why do you want to work so hard at it?
Kim Tae-hee: Acting is... Ah, it's a difficult question. Hmm, to me it's a horse. It's something that is still interesting and something I want to become good at. I have want to try doing various things more recently. Although I have yet to master it.

Beck: Do you think the day will come when you finally 'master' your work?
Kim Tae-hee: This is what Lee Byung-hun told me. That even veteran actress Kim Hye-ja is probably not satisfied with her own acting. So well, I wonder if there is a single actor who considers himself or herself to have mastered it. A certain great actor may be great at pulling off a certain role but not be as good at playing a different role. So no matter how hard you work at it, I don't think you would dare reach a point where you feel that you have mastered acting. What is important for me right now is that I keep studying. At any rate, I'm still going, I haven't come to a stop.