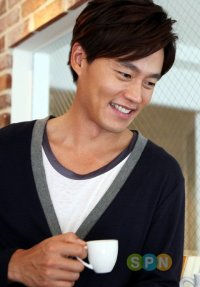 First date after "Lovers" ending party
-It would have been good if your father who passed away saw "Yi San"
"Yes, he was sick for a while and when he turned 66, before the premiere of "Shadowless Sword", he passed away. He didn't approve of his last son becoming an actor, so it's more regretful. My grandfather passed away before "That Female in Your House" too. If he knew his grandson played King Jeong-jo, he would have been happy".

-If your father was reborn, what would you want to do with him?
"I have to do what he wanted. Play golf the whole day, and get drinks at night. I miss him a lot".

-You got closer to Lee Seung-chul with "Phoenix" right? Do you meet him often?
"Of course. I went to a concert with Jeong-eun too. His personality was rough at first but after getting married, he got a lot nicer. So every time I say, "You really met a good wife", he says, "We both met good women. We should always be thankful"".

-When there are many good things at once, don't you get nervous?
"That's why I always try to be careful. I try to empty the greed and my mind. I also know how popularity disappears like foam, so I won't be caught up in it".

-Do mothers on both sides know each other?
"Exactly speaking, Jeong-eun's aunt who lives in America is my mother's friend. Her aunt saw me on television and said it seemed like her friend's son. Looking at it, our houses have a deep fate.

My grandfather, who was the president of Jae-il Bank, used to go to the same workplace as Jeong-eun's grandfather's elder brother, and the fate extended to her grandfather's younger brother. Jeong-eun's cousin is a friend of my aunt's. Anyway, we were both shocked".

-How did you win Jeong-eun's heart?
"Truthfully, there was no time when we ate together while filming the drama. She was taking precautions against me. I asked her to eat with me several times, but she refused, saying she didn't want a personal meeting while working. She said she heard from Kim Won-hee that she shouldn't fall for my dimples".

-You didn't make personal phone calls?
"No, not one. I didn't even know her number".

-When was it that you thought that she might be the one?
"Maybe when the drama was about to end. When there were one or two episodes left? I pretended to borrow her phone in the waiting room and found out her number, and waited for an opportunity. We had an ending party but I was sick and couldn't make it. I heard from Jeong-eun later but she thought that it was over like that because I didn't come".

-Then how did you meet?
"I called the day after the ending party. She didn't pick up because it was an unknown number, so I sent a text. 'I was sick so I couldn't make it to the ending party. Since the drama is over, can't we eat together now? Come out'. And I asked her on a date".

-I heard your houses were so close you could see them.
"If I open my kitchen window, I see Jeong-eun's bedroom window. We were neighbors so it was easier for us to date".

-It was luck that Jeong-eun was cast for "Forever the Moment"?
"Yes. I got to see her every day at the fitness center to exercise. Unexpectedly, Jeong-eun is a fan of rock music. I have interest in it too so we got closer more quickly".

"[Interview] Lee Seo-jin 'A great fate with Kim Jeong-eun's family'"
by HanCinema is licensed under a Creative Commons Attribution-Share Alike 3.0 Unported License.
Based on a work from this source