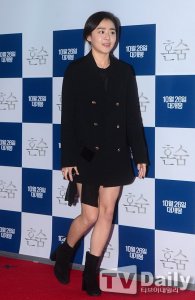 The nation's younger sister, female student, rumors, and woman wearing men's clothes. Anyone can explain their lives in several words. If 21-year-old actress Moon Geun-young were to sum up her life, these four words will surface. Everyone who knows her agrees to these words and is curious about them. They also wanted to hear her true thoughts about these words. In the past, she was liked by young and old for her innocent image from "My Little Bride" and many commercials. But after her disappointing movie "Love Me Not", it was hard to see her in dramas or movies.

So three years of inactivity. Now, her first steps of her 20s will be as a 'woman dressed in men's clothes', as shocking as a 'high school student who married too early'. In the September SBS drama "Painter of the Wind", she is playing Shin Yun-bok, who is rumored to have gone in as a palace artist dressed as a man.

For Moon Geun-young, acting was a series of risks like these. As an actress, Moon Geun-young's life is not inferior to hers. As soon as she became a young woman after being the 'nation's younger sister', the thing that found her was evil rumors. Who can say Moon Geun-young only walked across the broad highway?

-Even by physical age, you are an adult now. Your coming-of-age was a little chaotic. Everyone interfered, everyone worried, and sometimes, everyone forced.
"If that's coming-of-age, then it's still going on. These days, I somewhat understand why people tell me to stop growing and stay as I am. If I think of myself as twenty-five, it's awkward for me too. (laugh)"

-You've also been surrounded by rumors too evil to mention.
"I heard it at the beginning of the year. The person that came to mind was my mom. I thought, 'When Mom heard this or will hear it, how disappointed she must be'".

-How did it feel to experience those rumors?
"Rumors with evidence will be a little more comforting. It'll give me something to say. When people who never even said, 'Moon Geun-young is bad' were talking nonsense about me, I felt it. 'It's an example of how feelings change. Now, I'm even being hated'".

-The public praises you one moment, then turns cold the next. Your feelings about that?
"There was a time when they became cold. Wasn't it at my freshman orientation, when I chose Korean literature as my major rather than film and television? I took tests and had interviews for registration It's not like I got in unfairly, so it was unfortunate that they were saying those things about me".

-One of the words that describe Moon Geun-young is contribution to society.
"Truthfully, I feel like it's for my satisfaction. Is that too selfish? When I donate, I feel happy. When the people I've helped send me letters, when I receive that kind of feedback, I feel like I've done something really good, that I have to live better".

-Does that influence come from your mother who works at the library?
"My mom is the one who taught me to give. I've realized many important things from the friends I've helped. They're the friends who live in villages. These people who live hard lives saved money in their piggy banks to help others. They said, 'We want to help others just like Geun-yeong helped us'. I've realized through my experiences that if you share, you receive more, and it became a directing guide for my life".

-Your first role in your 20s is a cross-dressing woman. Is it too much, scary, or a soft landing to ease the shock?
"My thoughts were simple. The role was exciting and I wanted to try it. I know that there is a lot of talk about the role of a cross-dressing woman. It can be all right from the view of the public. Words like 'adult, woman' truly overwhelm me".

-If you succeed in this role, what title will you receive in addition to the 'nation's younger sister"?
"Is a title really necessary? I'll be bound again by the title"

-They say it's hard to escape an image as an actor if you are loved because of it
"It's a misunderstanding that I'm trying to change. When I look in the mirror, I think that my expressions or my looks are like a child's. I can't do anything but hope that time will be sketched on my face. The only difference is the pace, but everyone gets old. I want to enjoy this young appearance I have".

-The public doesn't want you to change but also criticizes you for not changing. You could be dissatisfied with that.
"It was like that once. I don't think I need to find the answer in the fans. From the public's view, aren't both right?"

"I want to love someone who shows me faith". When interviewing the teenage star, there were unspoken questions that were avoided. Most of them were about love. One thing that confirmed that Moon Geun-young was a young woman was when there were questions about things that were unspoken of before. Have you ever been to blind dates? Have you dated? What is your view on love? Twenty-one-year-old Moon Geun-young, who had been awkward because of her image, answered without hesitation.

-How does the student Moon Geun-young live? How about blind dates?
"They leave me out. Friends don't even ask me about it".

-Are there any students who show interest in you? Not things like asking for autographs.
"They only ask me for autographs. But I don't respond to those requests. I know there are a lot of complaints because of that. At school, Moon Geun-young is not a famous person".

-What is Moon Geun-young's view of love?
"There has to be trust between the two people. It's like that for friendships too. I want to love someone who shows me faith. And I want the other to feel the same faith from me"

-As a third year, you have seniority. Do you buy drinks for your juniors?
"There are several juniors who I hang out with. We meet and eat, and sometimes drink".

-What is the meaning of your school life?
"For people who see famous people on television, fame can be a dreamlike world. A life where you are always watched might be uncomfortable, but for me, school is like that. Falling asleep, ditching class, although I haven't spent all night drinking, drinking in front of school, these things seem like a dream to me".

-Plans to study more after graduating?
"I don't want to be greedy for it. But if you can work hard, I think it's best to study as much as possible. I worry about studying Korean literature more or studying film and television. I think it comes from the fact that I haven't officially studied for my job".

"[Interview] Moon Geun-young... after twenty, her harsh coming-of-age "
by HanCinema is licensed under a Creative Commons Attribution-Share Alike 3.0 Unported License.
Based on a work from this source