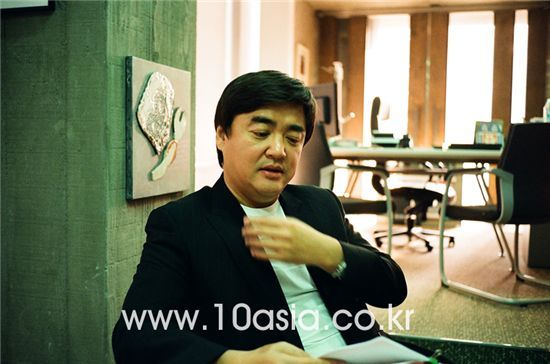 Beck Una: The scale of your overseas location shoots have become bigger too.
Jeong Tae-won: Italy, Singapore, Japan, China... and we may go to New Zealand too. And we won't just shoot scenes for the beginning of the drama but we'll be going overseas midway too. We'll be filming more efficiently too because we've divided up the crew into three units. When team A is shooting in Italy, team B will be prepping in Singapore, while the last team will be in charge of doing the special effects and CG. There were several parts I realized I could shoot more effectively while making "IRIS" so I'm going to apply them as much as I can. And everything happened so quickly with "IRIS", there was no breathing space other than the scenes at the college in the first and second episodes, but there will be more humor in "ATHENA". I'll also have a lot of supporting actors positioned throughout the show.

Beck: When does "ATHENA" go into production?
Jeong: We'll start shooting in Korea in June, then in Singapore and northern Italian cities such as Rome and Venice in July, then we'll come back and go to Beijing around September and shoot in Japan after the tenth episode. Like so, I think we'll be filming for about five months and the show will go on air around November. Viewers will keep guessing [about the show] and we should be able to go around such predictions so we can't have everything produced in advance. The moment our plan gets exposed, we will have to shoot that part again. I take the opinions of netizens into much consideration. Blogs too -- I sometimes get my ideas from them. (laugh)

Beck: Taewon Entertainment was established in 1995 so it's already into its fifteenth year. The Korean film industry went through much hardship during that time until its bubble from its own Renaissance period that it experienced popped. What do you think the past 15 years have been like?
Jeong: Ha... I had a hard time. (laugh) Of the people who were ranked in the power lists of film magazines during that time, there are very few who are still active. That's how tough and difficult it is to stay in this business is. There are many people who emerged with the determination that they would create a new wave but disappeared just like that from the scene. So I guess I'm just one of the people who have managed to survive. I set up a corporation under my own name in 1995 after having first worked in the U.S. starting 1986. After promoting concerts, I got started in the video industry in 1988 and imported films from overseas, starting with "The Mask" in 1992. Then I set up a company in Korea in 1995, released "French Kiss", hosted Michael Jackson's concert in 1996, then produced "Hallelujah" and released a Korean film for the first time in 1997.

Beck: You were in Korea up till high school but went to the U.S. for college.
Jeong: A lot of my close friends immigrated to the U.S. and I too just wanted to try living there too. When I was young and see exchange students at my school, I would think they are cool because I used to have a buzz cut but they had long hair. (laugh) So I told myself that I would go to the U.S. when I grow up. I also didn't have much of an interest in studying. I first went to San Francisco and then to study in L.A. which is where I started my first business.

Beck: What sort of business was it?
Jeong: I held a concert for Korean residents overseas at the L.A. auditorium with Korean folk guitarist singers such as Yoon Hyung-joo, Kim Se-hwan, Cho Young-nam, Yang Hee-eun and it did very well. It was a lot of fun and I felt that this was what I should be doing. Then I joined an American entertainment firm where I learned about American concerts and I started promoting concerts thereafter, inviting Korean singers. Then for the 1988 Seoul Olympics, I planned an Olympic fashion show where I took models to Korea and held the event with KBS.

Beck: You were in your early 20s in 1988. You must've been quite the bold young man. (laugh)
Jeong: Yes, I was extremely bold. (laugh) There was a video boom in the late 1980s in Korea -- with several hundred video companies and quite a number of video magazines too. Back then, 10,000 to 20,000 copies of videos from overseas would be sold if there was a main character holding a gun in the story. It was a crazy period. So anyway, I entered that market and became a dealer myself, importing American movies and selling them in Korea. I sold the most. (laugh) May over 500 films? Because I made at least 10,000 dollars. I really made a lot of money and also spent it so easily. Because I was young. Man, I wonder where all that money went. (laugh) But I've done nothing but work. I was never interested in other businesses such as real estate. People outside see me as much of a businessman but I think I've used everything I've made in movies. Not that I'm bad at doing business. (laugh) An executive president with CNN that I've known for a long time calls me 'street smart' when introducing me to other people. That everything I know comes from my experience off the streets. I also always put forth senseless and rubbish philosophy when I do business with foreigners.

Beck: What kind?
Jeong: Things such as loyalty or sacrifice? (laugh) That you cannot move someone without making sacrifices. When I first started in this business, my competitors were the owners of theaters. Then as conglomerates jumped into the business, those people fell down and conglomerates were competing for better prices. But then they deserted the industry too, a new form of capital entered, firing up the competition for multiplex theaters... So anyway, most people from Chungmuro got wiped out during that process. And I squirmed to survive. (laugh)

Beck: What's the secret to your amazing survival?
Jeong: Not overdoing it? Even when something does well, I wouldn't let myself become influenced with it too much. I'd accept it as it giving me the capability to pay my employees for the next two years, pay the rent for my office and do the work that I want to do. On the other hand, my stomach would turn when something that I've done flops but after thinking about it once, I wouldn't look back on it. I try and forget about bad experiences as quickly as I can because they won't help in any way. Another reason [I could survive] was because I had an eye for the business. I was able to foretell what would happen with the industry and position myself in the right place. When I need to go with the flow, I would make sure I was doing a proper job of that and when I need to stand on my own feet, I'd do that too. But if things didn't work out even then, I'd have backup plans just in case and that's how I've come to where I am today. But I'm a stubborn person so I think I've always ended up accomplishing my convictions. I made a lot of enemies in the process of doing so. The number of contacts I have on my mobile phone decline every year. I have about 200 names saved but I think 100 of them are numbers I got over the past six months. I think they'd all be deleted in the next six months since I'll be meeting the person I'm working with then. But I won't live my life like that anymore. I realized I have been very closed-minded.

"[INTERVIEW] Producer Jeong Tae-won - Part 2"
by HanCinema is licensed under a Creative Commons Attribution-Share Alike 3.0 Unported License.
Based on a work from this source