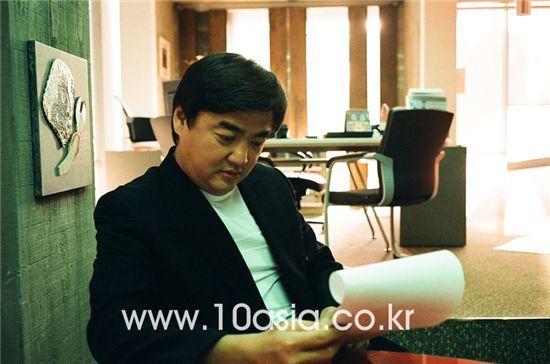 Beck Una: You're well-known as being a producer who works closely with the actors. There are many actors who like you or you get along with and you run a management agency too.
Jeong Tae-won: I always think of myself as their older brother. And that I should make the sacrifices for them first since I'm their older brother. But when I make new attempts, I expect them to engage in them for their faith in me rather than for the money. On the outside, Taewon [Entertainment] is perceived as a company which is overflowing with money but our organs are the only things that aren't held [as security]. (laugh) Every project is difficult in the beginning but the actors have always helped since they know their older brother is going to make a movie, not buy land, by making money. (laugh) Both "IRIS" and "71-Into the Fire" are also productions which would have been difficult to make without that trust. When a movie doesn't do well, the actors are the first people I feel sorry for. I wheedled them into doing it but I would leave a scratch in their life due to that film. It remains a debt in my heart. And I want to do whatever I can to repay that debt. The nickname for our company is actually "Taewon Rehabilitation Facility". (laugh) I can't work with actors like Song Kang-ho because he's always on top of his game and has no flaws. I rather like it when actors are in a crisis and I can help them 'rehabilitate' after working with me. The actor I'm most looking forward to 'rehabilitating' is Kim Min-jong because I worked on "Mr. Butterfly" with him in the past but it hadn't done well. He plays a very important role in "ATHENA". He'll play a very funny North Korean agent who defects to South Korea.

Beck: "IRIS" is currently showing in Japan on TBS, right?
Jeong: I love the fact that "IRIS" is being enjoyed not only by original Hallyu fans but the young generation since most Hallyu fans are getting older. (laugh) The Hallyu which started due to "Winter Sonata" was great but I think it's also the main cause behind the anti-Hallyu. The fans were mostly middle to old aged women so people started to dislike seeing their moms or wives immersed in Korean dramas. And most of these so-called "Hallyu dramas" were romantic so young people and middle-aged men disapproved of them. So I think the new point to the Hallyu trend these days is that people like Korean groups such as TVXQ, Big Bang and even girl groups. And "IRIS" is not a typical melodrama in that it moves on a much faster pace than the original fans of Hallyu are used to. TBS and our strategy too was not to target at Lee Byung-hun's original fans. Unlike past dramas which were targeted at the Hallyu, we left out the world 'Hallyu' on purpose and promoted it as if it were the average Japanese drama. We did not send out pictures which showed Hallyu fans crowded at airports. For us, it was most important that we attracted a younger fan base as well as male viewers. Was it 4.6 percent last week? TBS' satellite channel scored its highest rating to date. The fifth episode will air this Wednesday but I heard it's the first time [a foreign drama] has gotten into the nine o'clock prime time slot after an American drama got into the eight o'clock.

Beck: How did you do the planning for "71-Into the Fire"?
Jeong: I had always wanted to try making a war film and felt it would never happen if I didn't do it now. 2010 marks the 60th anniversary of the [Korean] war and it seemed that the younger generation would start recognizing it as an ancient incident, closer to the Japanese invasion of Korea in the 16th century, a war that not even their grandfathers experienced. So I realized how important it would be to make the film this year and tell the younger generation about how awful and horrible a war is. I hope "71-Into the Fire" sells but more than that, I'm hoping that many people get to see what times the generation before us lived through.

Beck: John H. Lee directs "71-Into the Fire" but he grew up overseas. Did you purposely let him helm the film despite him probably having less of a sense of what happened during the times of war?
Jeong: I was actually hoping that he'd produce a different type of war movie. But once he actually got started on it, I realized that there was too much of a gap. The imagery was better than I expected it to be because he's strong with visuals but being someone who has no knowledge of the war and from a different generation, I joked to him in the beginning that I have no idea which war he was shooting. From midway on, I actively took part in the dramatization of the film and we worked on it together. I am confident now in that everything is at a satisfying level.

Beck: You said you dream of becoming a producer like Harvey Weinstein but he has a director like Martin Scorcese. So far you have worked mostly on films where the producer plays a big part but don't you dream of working with a strong director like Scorcese?
Jeong: Of course I do. Like director Kim Jee-woon. But I think I'm not worthy of working with him. Why would he work with me? You've probably heard why through rumor. (laugh) My nickname is 'Kim Il-sung'. Because I get everything done my own way.

Beck: Could such active interference and participation possibly mean that you may become a director one day?
Jeong: No, not really. Not that I can guarantee it but for now, I like being a producer. I always say this to directors. that I'm not an enemy but to just consider me as a strong-willed and experienced assistant director. That the director is there to do art and that I'm someone who needs to find the point where people will find satisfaction. I persuade them by showing them the results of how I have done so far. And when I still can't persuade them, I become Kim Il-sung. (laugh)

Beck: What is at the core of what you produce, or do you have a philosophy?
Jeong: There are various types of producers right? Some work around the director and some work around the producers but I don't think it's correct to say which is right or wrong. Apparently, I'm the latter. But I think commercial films and dramas is what I'm good at. I have some know-hows that I have gained in both Korea and overseas so rather than teaching or interfering, I believe I'm an assistant who can give tips. And some directors will be good at accepting that while others won't. I don't think I'm treating the directors badly. I'm also not overstepping my bounds because I'm greedy to be the director. I just think that I am a producer who is extremely devoted to balancing the artistic and commercial aspects to a movie. And I have no intention of changing my style. Of course, I do think I could soften up a bit because I'm quite rigid. (laugh) But I think I'll continue to live as this kind of producer and believe that producers like me need to exist.

Beck: It won't be easy actualizing the cards you have already pulled out but are there any other cards that you are may be planning on pulling out?
Jeong: I have a lot in mind right now but I think I'll focus on "ATHENA" and "IRIS" for now. I also want to gather my comedic family (laugh) which includes actors such as Shin Hyun-joon, Tak Jae-hoon and Gong Hyung-jin to create a drama like the "Sopranos". I would distribute the soft version on a public network while the hard version on cable and make a real action-comedy which has been upgraded in every aspect possible. They'd fight against the Yakuza's in Japan and Mafia from Italy. And we usually have a lot of fun on set so everyone has been begging we get started soon. But I have a couple productions I have to focus on for now so I'm going to sign on a scenarist first to get started on the script.

Beck: I'm guessing you won't be making a film for a while then with such plans for the near future.
Jeong: I've done a total of 28 films so far including "71-Into the Fire". I need a break. I'm not sure about anything else but I have great drive. When I start, I'll just push forward fiercely. Many things wouldn't have happened if I hadn't. And I think that's how I ended up producing films for the past 15 years. That's how long I've been releasing films so whether it be a success or not, I think there hasn't been a time that I haven't had a hard time. And now, I think I'm leaning more toward TV [shows] which are like movies. High ratings have a ripple effect which does not compare to a film which has drawn in over 10 million moviegoers. The thrilling feeling I get is different too and the market is also much bigger. A movie will only be watched once but a country will live on a well-made drama for months. I've just started so I want to try a few more dramas. And then when I feel like making movies again, I'll probably start rummaging through a couple scripts. Every moment, I just want to do what is most fun and what I want to do the most. I love being on set. It makes me feel like I'm becoming healthy.

"[INTERVIEW] Producer Jeong Tae-won - Part 3"
by HanCinema is licensed under a Creative Commons Attribution-Share Alike 3.0 Unported License.
Based on a work from this source