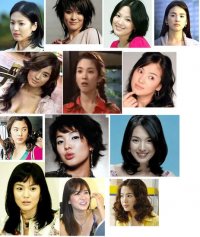 Top star Song Hye-kyo was at the 61st Cannes International Film Festival. She agreed to star in Director John Woo's next work "1949", and although she arrived in Cannes on the 17th, she had to hide in her hotel room.

On the 20th around 10:30 am, Director Woo and Producer Terence Chang held a press conference for their next work, and when Song Hye-kyo appeared, the Chinese journalists were shocked. It was because Director Woo did not even mention Song Hye-kyo in a briefing session on the 19th.

She wore a white dress and arrived with her opposing character, Chinese actor Chang Chen. She seemed flushed to be working with big names.

Song Hye-kyo said, "Director Woo contacted me after watching "Hwang Jin Yi", It's my honor to be able to work with a director that I respect". Her popularity is high in China because of "Autumn in my Heart" and "Full House" and many journalists were asking more questions toward Song Hye-kyo than the director or Chang Chen.

The following is from the press conference and an interview afterward.

-How do you feel about starring in Director John Woo's "1949"?
-I'm very happy that I get to work with a famous director and Chang Chen. I'm nervous but I'm also excited. I want to show everyone a fantastic, completed movie.

-When did you get the request from Director Woo?
-Last January, he said that he liked "Hwangjin-i"and contacted me. He said the character images in "Hwangjin-i" and "1949" are similar. I received the scenario and I liked it so I decided to take it.

I met Chang Chen in an awards ceremony last March in Hong Kong. I had a good feeling about him and wanted to act with him, but I didn't know it would happen this quickly.

-What is the story of "1949" and what role do you have?
-This movie takes place in 1949. There are three couples, and Chang Chen and I are one of them. After wealthily living in Shanghai, I lose my husband in the war and go to Taiwan. I meet Chang Chen and meet a new fate.

-It's a historical film. How are you going to get into character?
-It is like homework because it's before I was born. I'm studying while looking at documents. I'm very happy about it because it's the first movie I'm filming in China. There will be other great actors, and I think it will be like a " first love " to me.

-Did you like Director Woo's works?
-I really like "The Killer". People say it is an action movie, but I say it's a love story. So I think he'll portray love in a warm and beautiful way in this movie, too. I'm looking forward to it.

-You agreed to a drama with Director Pyo Min-soo. Don't the schedules conflict?
-Director Pyo's drama will film in July and finish this year. "1949" will start filming at the end of the year and are aiming for a premiere next year, so there won't be a big problem.

-Isn't working with Director Woo overwhelming?
-I'm not in this movie alone, and there are many more famous actors. I'm the only Korean, but I want to film with a joyful heart instead of being overwhelmed.

-You arrived at Cannes on the 17th, but no one saw you.
-Director Woo said not to go anywhere until the press conference. So I stayed in the hotel except following the director to one party. He said not to meet with any reporters. (Laugh) I'm going back on the 21st so I'm going to enjoy the film festival as much as I can.

"[Interview] Song Hye-kyo "I got to do a movie like a first love""
by HanCinema is licensed under a Creative Commons Attribution-Share Alike 3.0 Unported License.
Based on a work from this source