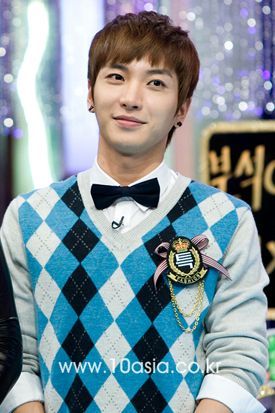 10: Shindong, your dress up show is also popular. You recently even pulled off actress Shin Min-ah's look from SBS TV series "My Girlfriend is Gumiho". I'm sure even the preparation that goes into isn't an easy job so what would you say are the difficulties you experience if there are any?
Shindong: I actually had dressed up a lot since a long time ago -- so much that there were almost nothing I hadn't dressed up as. I used to dress up once a day when I used to host a show on cable channel Mnet. But dressing up as someone isn't just about dressing up like them. There is a large amount of pressure that comes from the fact that you need to express yourself to be exactly like that person while doing it so that it's also fun and what I was worried about a lot was whether the onlooker would enjoy watching me do it. I do think women enjoy it a lot (laugh) but it's most difficult trying to imitate people who are amazing. In that sense, I think the hardest person to dress up as was Rain since he shows his body. I was worried it would look like I was making fun of the performances he had put on so far if I tried to look funny by just baring my upper torso, but he enjoyed it to the extent that he said I did the best job out of people who have done parodies of him so far. I was very grateful for that. I think I'm able to do this because they themselves enjoy it as well. I sometimes do think that maybe I'm trying to create humor by simply using my body, but it's definitely something that doesn't just come out with the use of your body. I have to think about a lot of things, I need to put on more weight... (laugh)
Eunhyuk: Put on more weight? (laugh) But really, he's not just good at dressing up as that person but he's good at expressing the characteristics each person has.

10: Well I'm sure you've met a lot of entertainers so far so who out of them have you thought 'I wish I could just be as good as him'.?
Eunhyuk: Definitely Boom.
Leeteuk: I think Boom is the most prominent figure when it comes to entertainers. And the best emcees are Kang Ho-dong and Yoo Jae-suk. There's an undeniable reason to why people say they are so.

10: What do you remember most from the know-hows or tips Boom has taught you?
Shindong: I love the confidence Boom has. Even if we might say "It's not fun"... while we were discussing amongst ourselves, he would say, "Let's just try it first. The atmosphere on set is different so let's just try it!"
Eunhyuk: And then he says, "I'll back you up". (laugh) But really, even when something isn't funny, it can seem like it's funny if someone around you laughs about it. Boom had told us, "When your group members try to do something, laugh even if it may not be funny and make it funny". And like he says, there's three of us so we have the advantage in that sense. 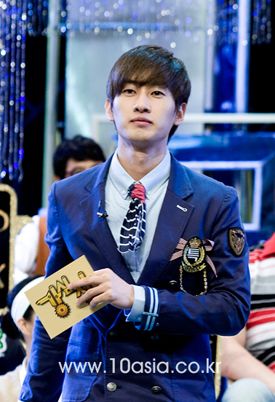 10: Super Junior has pursued its singing career in a variety of units so I think the three of you could be called the "Steel Heart" unit. Are there any members of Super Junior who envy or want to join you guys?
Leeteuk: Many. (laugh) Dong-hae does too and they all say they want to. And it's not just members of our group. Other celebrities say they want to join our academy as well. These days, After School member Jungah asks us how to audition for it.
Eunhyuk: And of our juniors, ZE:A - Children of Empire member Hwang Kwanghee keeps saying he wants to join us which makes me feel very proud. (laugh)
Leeteuk: Since "Superstar K2" is on these days on Mnet, and we had talked about this with Boom too, I think it would be good if we held an audition under the name "Superstar Academy" and accept a certain number of winners into our academy. The show would do great if it could air.
Shindong: Really! I want to do that. I'm hoping you'll emphasize this when you write the article. (laugh)


10: What more is there that you want to do with it being the first anniversary of "Steel Heart"?
Shindong: Donghae recently sang the logo song for "Steel Heart" so this is what we jokingly said while we were in the States for our concert. "What would it have been like if we were American celebrities? "Steel Heart" would be equivalent to about "The Oprah Winfrey Show", we'd be the regular guests who talk on the show and Donghae would have made the logo song". When the show gets bigger, I'd like the show to go to the U.S. and help make it known overseas.
Eunhyuk: Many of the people at our LA concert had watched "Steel Heart" so they kept saying "Teuk Academy". Variety shows like "X-Men" have gone overseas before but it hasn't happened with a talk show before so I wonder what it would be like if it was tried overseas.
Leeteuk: I'd like to try holding the aforementioned audition on "Steel Heart" and rather than wanting to do something in particular, I just hope we'll be able to do our show for a long time. We've experienced the difficulties that comedians face and how hard they work to come up with new ideas... we've actually run into a lot of walls as well. But when we call Boom, he says, "Regardless of how fun or boring you are, what's important is for how long you can keep doing what you're doing". It's been a year now so I'm hoping we'll be able to keep going until at least the time that Boom gets discharged from the military.

10: Lastly, any words you have for Boom?
Eunhyuk: First of all -
Shindong: Take your time.
(All laugh)
Shindong: No, we want to try something new with him, if only he'd be able to come out quickly, but since there's only a set amount of time. (laugh)
Leeteuk: I heard he's really busy in the military. That he's almost as busy as Lee Hyori so I hope he stays busy. (laugh)

"[INTERVIEW] Super Junior's Shindong, Leeteuk, Eunhyuk - Part 2"
by HanCinema is licensed under a Creative Commons Attribution-Share Alike 3.0 Unported License.
Based on a work from this source