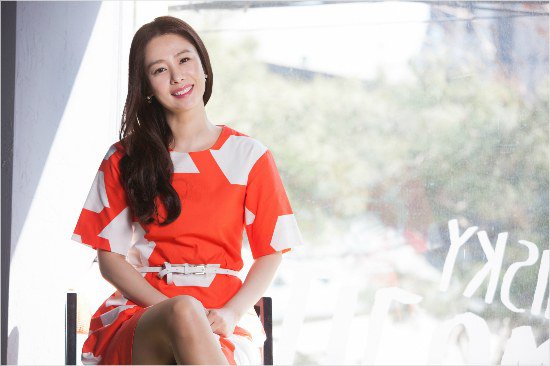 Almost 20 years into her career, she's created yet another hit. She starred in the KBS 2TV weekend drama "This Is Family" which held a record of more than 40% in viewing percentage.

This interview is a late one considering the fact that the drama ended a few weeks ago. Interviews are mostly done right after the end of a drama. Initially, this interview was turned down until recently when we received a call that she'd do it.

This interview wasn't planned so we were worried, but there was no need for that as soon as we met her.

Kim Hyun-joo is hard to justify with just the words 'cosmo and strongly ambitious'. She's an enjoyable person and she knew how to continue on a conversation. She would chatter on and on then suddenly become a teenager with a heart for love.

This actress makes people feel comfortable because in an hour or so she made us feel so comfortable, it felt like we'd known each other for ages. 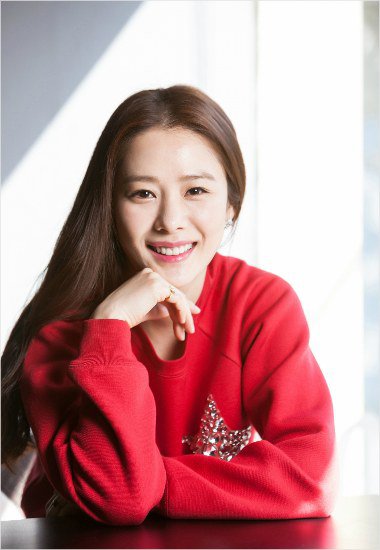 We didn't think an overseas trip with only a few people meant anything. It meant more for us all to go so we decided to travel somewhere in the country. We had to use all the time we had. I asked Seo Kang-joon what he wanted to do and he likes active stuff since he's still young. There were ATVs that went from the mountains down to the beach so Park Hyung-sik, Kang-joon, some others and I went on it. Kang-joon said he liked to watch the sun go down and that was unexpected. He liked that part of the trip the most.

▶ Is there a reason you allowed this interview now?

I wasn't going to do it but then again I thought about what I had to do now that the drama was over. I usually go back to being freewheeling Kim Hyun-joo when I finish work. I am conservative that's why. I wondered why I was being interviewed.

I could relate a lot because I am a daughter too. I am also the eldest so I was closer to my character. I worried that I might overdo it so I had to restrain myself in certain points. I did replace the longing for my father by calling Yoo Dong-geun 'father'. I always think a child and parent should be considerate of each other.

▶ Are you and Cha Kang-sim similar?

I think we both show off when we're outside. We pretend we are good at everything but at home we just relax and don't bother to do anything. We aren't good with love and we don't move an inch at home. It was a chance for me to reflect on myself and decide to change. Nothing's forever and so am I.

▶ You were so naturally comical

I am similar to Kang-sim in that way. However, I think I was more appealing in the drama thanks to Kim Sang-kyung. A woman needs love.

▶ Cha Soon-bong died in the end, do you think that's a sad ending?

It wasn't. The end was set and nothing could change that. We couldn't stall and how can we prevent someone from going away? It's not something I can do with my power. Parents won't be around forever and when they are gone, brothers and sisters must learn to depend on each other and live on. Then we'll eventually become parents and the whole thing repeats itself. Many wanted him to live but that's wishful thinking. 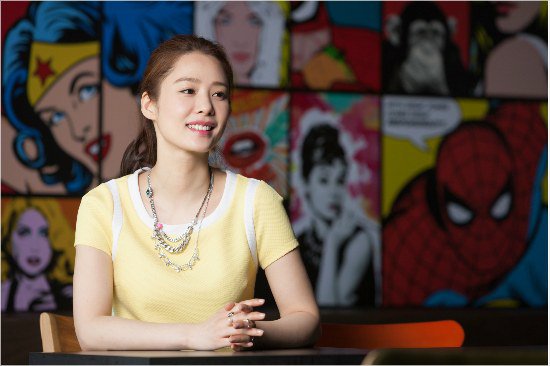 ▶ "This Is Family" succeeded without any extremity. What does that mean for an actress?

That means a lot more to me than the result. It's good to cause a positive impact on a drama. Many say the drama was 'good' and it means a lot to hear that without any extremity or dramatic layout. I think it was all about timing and we proved that it doesn't have to be dramatic to be liked.

▶ Did it have a positive influence on Kim Hyun-joo?

I found a new way to enjoy work. As someone who makes dramas, I realized what I have to do in the future. I am more confident now and I know who I am.

▶ We heard the atmosphere was great so you might miss that

If people come together with love, that's family. On the last night of our Jejudo trip we realized that it really was the end. We will meet again and go back to our lives after time but it was sad to think we might forget the good moments that we had. But our team is going to stay in touch. There's great love for one another and it's not because of me, but because everyone is so nice. I am grateful.

It's not easy to create results like this. We have to work hard to make sure we create another drama with a record of 40%, but I am sad to think that it might be the last.

▶ You were pointed out for your comedy but is there anything you wish could have been done better?

I watched "Discovery of Romance" and "Autumn in my Heart". I got vicarious satisfaction out of them. I felt like I was in there acting myself. It's a pity I was closer to comic than romance. I could have let everyone see my all. Next time, I want to try something like Hyo-jin acted out by Son Dam-bi. I want to be lovely. In "Leaving Las Vegas" by Nicholas Cage, there's a woman I want to play. I don't mind critical love or even a sick person. Or, I wouldn't even mind complete comedy. There are so many roles I haven't done yet. 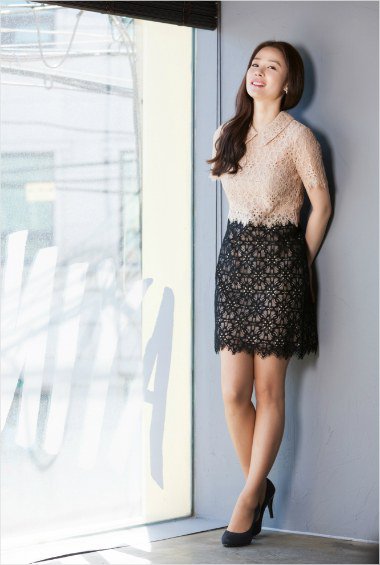 ▶ Who do you want to be your romance partner?

I want to work with someone younger. Someone before 30? I haven't met a lot of young people yet. So I want to meet various types of actors.

▶ It's time for you to think about marriage

'Marriage' is a taboo in our family. My brother sometimes jokes, "Is my brother-in-law alright? I want to drink with him". Then I tell him not to joke and he stopped doing it. I sometimes wish I had someone enxt to me, but I also feel I might feel congested if there really is someone.

It's been a while since I have so I even imagine myself in a relationship. I think a woman is radiant when she's in love. I haven't thought between work and love yet. I have my taste and I used to think about what I wanted, but I felt like I was giving myself too much credit. My ideal type was someone who was taller than 180 centimeters, but now I know that height doesn't matter. I just wish I had someone who saw me without greed and just be happy with who I am right now.

▶ You were active in various areas before

I learned that I was an actress in "Glass Slipper". I was in variety shows and did a lot of fun things before that. I was like a machine. I was even in movies, dramas and radio at the same time. I didn't know the true feeling of acting for more than 2-3 years. I didn't think it was that hard either. Then after "Glass Slipper", I realized I wanted to act. The next one was "In-soon is Pretty" when I was in the slumps. That drama got me out. The situation in the drama was like mine and I thought I could do it better than anyone else.

▶ Did you want to do all that work back then?

My agency didn't have much expectations in me. They put me in anything. There weren't anyone else like me back then, too. I used to substitute for seniors and I was hurt a lot. In my diary, I had a year's worth of schedules written down. I looked at it as I cried. Watching rookies who do what they are told remind me of me and I feel bad for them. 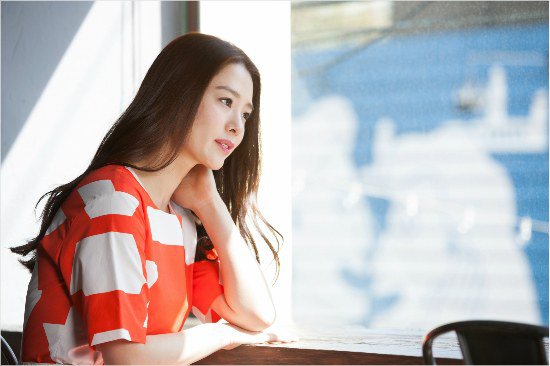 ▶ You are quite honest and bright at the same time

I am not that honest. I have a lot on my mind all the time so when I get depressed, I get really depressed. It's important to have something I enjoy doing. I need to rest when I need to rest. I love sewing and going for drives. I also learn drawing and playing the drums and it's really fun. I go to rock festivals and the music makes my heart dance. I go to a neighborhood studio to draw. I didn't mean to start arranging flowers for treatment but it helps me relax. I don't write a diary anymore. I am happy if I spend my day well. I blame myself too much when something goes out of plan. I don't try to move according to plan.

▶ You seem to have a righteous and healthy life

I try not to be affected by my feelings and try to be upright. That's why my characters are limited. I try to be free. I get piercings when I am stressed. I enjoy the little secret by myself when nobody knows what I got pierced. I always look at tattoos wondering what I can do and where. I did get one before, but I am careful because of my job. This time I want to get one where I can see it.

▶ Is there something else you want to say?

I took a picture with Park Hyung-sik at the airport and wondered how pretty I looked. Because of our age gap, no one 'misunderstood' the picture. I thought a few might ask about me and him. I read an article on the plane and burst out laughing. Hyeong-sik is really cute and friendly. It's something I want to learn from him. I may be too blunt.

I like it now, but I don't know what type. I want to live everyday to the fullest and I want my acting to reflect on my experiences from life. I don't want to be prejudice so that hopefully I absorb my characters better.

"[Interview] The Girl Within: Actress Kim Hyun-joo"
by HanCinema is licensed under a Creative Commons Attribution-Share Alike 3.0 Unported License.
Based on a work from this source