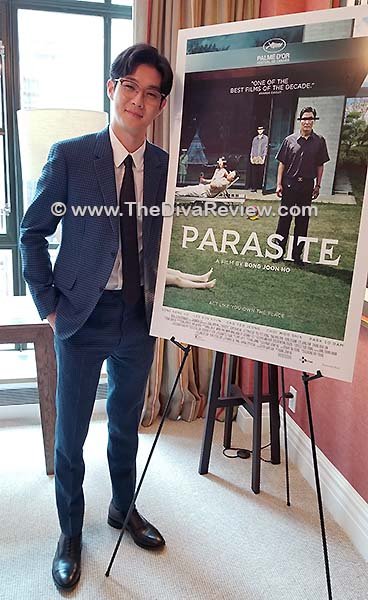 In the two years since Choi Wooshik made his appearance in Bong Joon-ho's "Okja", the sky has been the limit. Choi has rocketed from bit parts in television dramas, to award-winning feature performances in "Set Me Free", and co-starring in blockbusters like "Train to Busan", to lie at the center of Director Bong's Palme d'Or-winning masterpiece, "Parasite".
Having graced The Lady Miz Diva with his very first overseas, English-language interview in 2017, Choi and LMD reunite to talk exclusively about his second time around with Director Bong, learning at the knee of acting legend, Song Kang-ho, and a possible place in Hollywood.

The Lady Miz Diva: I recall there being some interview show where the idol/actor Im Siwan said that when they co-starred in "The Attorney", Mr. Song Kang-ho was very upfront about his opinion of Im's skills. Something along the lines of, 'Man, your acting sucks'.

I'm sure he didn't need to tell you that, but was he that direct about giving his advice or opinion on the set? Or when you sought him out, what kind of guidance did he give you?

Choi Wooshik: Sometimes -- it didn't happen a lot, but sometimes if we are missing something very important -- but he wasn't really direct to us. I don't know why, but he would just come and ask us some questions. Like, he wouldn't just say, "Yo, the answer is this. Just do that". He would just go around it, kind of making us figure out the answer by ourselves. So, he would just ask us some questions. It's like those sensei. He's really good on set.

The Lady Miz Diva: We had talked about that in our previous interview, how sometimes veteran actors will not interact with younger actors because of that gap. It's so nice to hear that Mr. Song doesn't adhere to that. I wonder if that's one of the reasons Director Bong loves him so much?

Choi Wooshik: Maybe, because Bong does the same way, too.

The Lady Miz Diva: "Parasite" has a lot of interesting views about society in general in this film, but there are things that I understand run deep in South Korean society. The constant references to smell for one thing. Mr. Park continually emphasising his subordinates "crossing the line".

For a movie that is pretty brutal about the underside of Korean classism and society, it's done very well back home. What do you think people are responding to?

The Lady Miz Diva: Speaking of ensemble; your other amazing ensemble film had something to do with zombies on a subway, or something...

The Lady Miz Diva: Now you have this incredible group of actors around you in "Parasite". As an actor, do you feel more or less pressured when surrounded by a group of experienced peers? Or is it preferable to you -- or more pressure -- to having a more individual performance, as in "Set Me Free"?

Choi Wooshik: I think it goes both ways. I mean, if you're really surrounded by really talented people, then you also have this pressure that you have to be equally talented, so you have to perform better. But sometimes that gives you motivation -- it motivates you. Like', Oh, okay, they are so good. Okay, I gotta do better'. It gives you good synergy.

But sometimes, in different movies where I have to work with less people, or by myself, then that also gives me a lot of pressure, like, 'Oh, okay, it's only my part, so I have to do better. I have to get the audience's attention by myself'. I think it goes both ways, and I love the way we played it in "Parasite", because I was just surrounded by the best in Korea, so it was really good.

The Lady Miz Diva: This is such a very different role for you than anything you've done: I remember in our first conversation, you said something to the effect of, 'If you've seen me, you know my personality is not cool', but in "Parasite", you're like this Mr. Seducer...

The Lady Miz Diva: ...And you're messing around on your best friend, Min {Park Seo-joon}, who asked you to look after the girl you're macking on. Dude, what is that? Was that your first time playing that kind of role? What was that like for you?

Choi Wooshik: {Laughs} Like two days before, we premiered in New York, I remembered, because I was getting so embarrassed -- you remember that scene where I had to approach Da-hye to kiss, right? People were screaming because it was too cheesy, and they could watch it. I couldn't watch it. I was getting so embarrassed. {Laughs} Bong sat right behind me. Bong was giggling. Song was giggling. It was really hard to act that part.

The Lady Miz Diva: Does the Kim family ever think they're wrong? It felt like sometimes Ki-woo wanted something different than this scamming life? What do you make of his take on the way they live?

The Lady Miz Diva: I didn't realise until the end credits that you are actually singing the final song. How did that come about?

Choi Wooshik: I thought Director Bong was joking, because he said, "Oh, do you want to sing for the movie?" And I thought he was joking, so I was like, "Oh yeah, okay", but he actually wrote the song, and he gave it to me. At first, I was like, 'Oh no, I can't do it, because I'm not a good singer. I can't put a negative vibe to this masterpiece. I can't ruin it'. The song was actually a narrative song, so I thought, 'Okay, I think it's good, so I will try'. I actually went two weeks for vocal training for that.

The Lady Miz Diva: Whoa, you really took it seriously.

Choi Wooshik: {Laughs} I mean, I didn't want to ruin the masterpiece. At first the note was really high, so I couldn't sing it, so they actually lowered down the key.

The Lady Miz Diva: Director Bong had mentioned that the film was initially inspired by his college days as a tutor. Did he share anything from his own experience that helped you create Ki-woo?

Choi Wooshik: Oh yeah, when I was performing the tutor scene, he actually told me the story that he taught people. He shared about his experiences; how he saw different classes while he was tutoring some kids. So, that actually gave me some thoughts about Ki-woo's part.

The Lady Miz Diva: Last time we spoke, you told me how originally you wanted to be a theatre director, and that you were interested in making short films or a web series. Are you any closer to that?

Choi Wooshik: After we spoke, I did have some writing that I did. I wanted to try out some streaming or short series on YouTube, but as I got older I kind of found it really difficult, because I can't work and do that at the same time. So, I don't know, I keep trying it, but I'm not sure if it's going on happen anytime soon.

The Lady Miz Diva: What's next for you?

Choi Wooshik: Right now, I'm working on this movie - I don't know if it's the right title, but it's "Generation of Policemen". I have these two movies working in Korea, but definitely if I have a chance, I would have some good transition to the States. I don't know if this is ever going to happen, but...

"[Interview] The Lady Miz Diva Meets Choi Wooshik for the Release of "Parasite" "
by HanCinema is licensed under a Creative Commons Attribution-Share Alike 3.0 Unported License.
Based on a work from this source