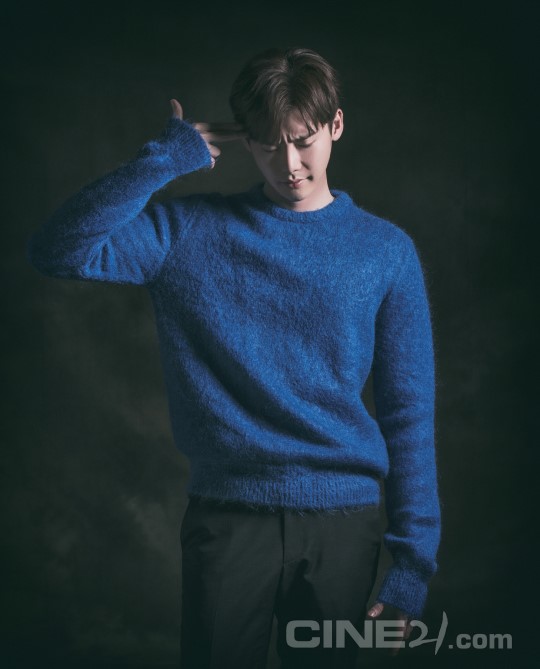 Very Important Person, "V.I.P" is the character Kim Gwang-il in this movie, played by actor Lee Jong-suk. Kim Gwang-il was born under a North Korean high-rank official, and raised in such luxury, getting anything and everything in his hands. This spoiled brat becomes a serial killer with such cruelty inside him though he shows his innocent face upfront. As actor Lee Jong-suk approach the ending of his 20's and goes into his 30's, this is an important time of his career and it is very meaningful that he chose this piece of work.

Q. It's so unusual for you to work among actors, because you were mostly working with actresses in your previous dramas and movies. How was that change?

A. That's true. It was a pleasure working with my veteran actors. Since they are actors with firm filmography and solid experiences in this field, it was so great to learn real skills from them, rather than some hypothetical and indefinite advises.

Q. I heard you had a thirst for a noire genre, a manly action movies. Also, you personally requested your appearance to the director, Park Hoon-jung?

A. I think every good actors have a famous 'masculine' movie. For actor Jo In-sung, it's the movie, "A Dirty Carnival", for actor Kim Rae-won, it's "Sunflower". Also, actor Won Bin is famous for the movie, "The Man From Nowhere". Looking at these marvelous works, I always wished I would be able to act in one also. It was my long-time desire to do so, but it was hard to step up to the plate since I'm very aware of my standard hardware and image. However, "V.I.P"'s Gwang-il seemed like a character I could be a bit greedy about. So, I contacted director Park Hoon-jung.

A. Serial Killers and psychopath characters are easily seen in Korean movies, so I tried not to look like the usual. I thought that if I have a child-like smile while doing inhuman actions, it would give off an odd feelings to the viewers. I was always thinking of what the director said about my character. He said, "If a son of a rich family kills a servant, he doesn't get scoldings. However, if he kills a cow they are raising, he will get scoldings because that's an asset. That's how Gwang-il was raised".

Q. When we look at your previous dramas, such as, "Pinocchio" and "Doctor Stranger", you tend to have a lot of characters who steps up from their hardships on their own and learn to become better. However, Gwang-il seems like a totally different character since he was born and raised as a world wide VIP.

A. Right. For dramas, a character will grow from episode 1 to episode 16. However, it was a bit difficult to get used to Kim Gwang-il since he is different. Until now, my focus was more on dramas, so sometimes I was lacking in truly studying my characters due to the busy schedule. I was able to regroup myself as I filmed "V.I.P". Also, it was a delight to watch the senior actors on the scene.

Q. What do you think of actors Jang Dong-gun, Kim Myung-min and Park Hee-soon on the scene?

A. From Kim Myung-min, I saw a perfectionist side of him where I thought, "He didn't just prepare for this role. He mega-prepared for this role". And for Park Hee-soon, his actor atmosphere was amazing. He is very close to my ideal example of man I'd like to be, and it was a surprise to see his unexpectedly cute sides (*laugh*). For Jang Dong-gun, I knew he was famous for being a nice gentleman, but I felt it firsthand this time. After the filming, I sent him a message saying, "Sir, thank you so much and I truly respect you from the bottom of my heart". and he replied, "You can call me Hyung (Big bro). I will be a senior actor who won't disappoint you". That was it, I became a fan (*laugh*).

Q. You are 29 years old this year. Do you give much meaning to your age change?

A. I try not to give meaning to it but I've been listening to singer Kim Kwang-seok's 'About 30'. In the beginning of my career, I wished to be 30 as soon as possible. I wanted to be a masculine actor and I thought that by 30, I would have been. Now, I just think about giving my best in everything the best way I can. When the drama, "While You Were Sleeping - 2017" (Will be aired in September) comes to an end, I'll be 30. So I plan on resting a bit reflecting on my busy 20's. I will be going on a trip with actor Jung Hae-in and Shin Jae-ha as we became close after a drama.

"[Interview] "V.I.P" Lee Jong-suk - The Cruelty Hidden Behind His Innocent Face"
by HanCinema is licensed under a Creative Commons Attribution-Share Alike 3.0 Unported License.
Based on a work from this source