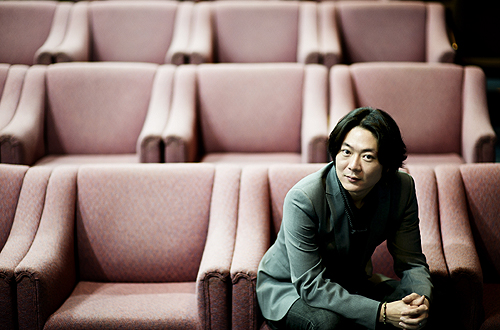 Will this be a source of new energy for the Korean film industry, or a new era in which it will have to compete with Hollywood's studio system in making Korean-language films? Fox International Production (FIP), part of the 20th Century Fox Entertainment group, has declared it is officially entering the Korean film production market. FIP was established in 2008 to invest in, produce and distribute local language films in major territories around the world. Simply put, this means that a major Hollywood film company will be making Korean-language films in Korea. Dohoon KIM met with FIP's Korean Creative Executive Paul HUH to talk about their plans. After studying finance in New York, Huh started working in the Korean film industry first at MK Pictures's international sales team and later became a producer.

KOBIZ:What made FIP decide to go directly into investing in, producing and distributing Korean films?
HUH: The Korean market is an important one that has a 50% local film market share. FIP thought it was a country worth starting direct production, investment and distribution in, the same way it did with countries like India, China, Russia, Germany, and Japan. Actually, when FIP first carried out co-production and partial investment/distribution on Na Hong-jin's "The Yellow Sea", there wasn't anyone exclusively and centrally working on FIP's projects in Korea. It's been about a year, starting in January of last year when I entered the company, that we've been concentrating specifically on sourcing local productions.
KOBIZ: You're planning to release two films in 2012. Tell us about that.
HUH: We are currently planning and developing five to six films at the moment, with an aim to release two this year. I can't reveal details as yet. Both are mid-size budget films, directed by established filmmakers who have already directed one or two films. There's no pressure at FIP to put out an exact number of films per year. We are planning to put out films gradually, as they are prepared.
KOBIZ: What are FIP's criteria for selecting films to greenlight?
HUH: We choose films that will do well at the Korean box office. Of course, we keep foreign sales in mind as well, but the primary goal is to make films that can approach Korean audiences with Korean sentiments. A historical period piece that won't do anything for foreign sales, as long as the script is good and it shows potential for the Korean market, can be greenlit without problem, too.
KOBIZ: As FIP's Creative Executive in Korea, there must be pressure on you to keep communications smooth between the head office and Korean staff. Are there any systemic and/or cultural differences you have felt in the past year?

HUH: My biggest role is to keep the communications going well between the two sides. Personally, I have worked on productions in Korea if but for a short while, and I have experience toiling as the youngest of the production team as well. So I think that helps me fine-tune the differences in opinion more skillfully. There can be trial and error, but FIP has also already had experience coordinating opinions with local crews in places like India and China, so it shouldn't be too hard reaching accords as we keep Korean practices in mind and if both sides compromise a bit.
KOBIZ: Don't you think 20th Century Fox could be seen as invading Korea with Hollywood capital and systems?

HUH: Of course there will be people who think that. But, I don't think Hollywood capital will snatch away market share from the Korean market. It is here to make money, but aside from making a profit in the limited market of Korea, our goal is also to use Fox's distribution network to introduce these films to the global market, increase their gross and expand their opportunities to meet with audiences. In addition, just in the way Fox discovered director Timur Bekmambetov "Night Watch" in Russia and took him to Hollywood, it will be able to discover good directors and actors in Korea to launch in Hollywood, too.

"Interview with Fox International Production Creative Executive Paul HUH"
by HanCinema is licensed under a Creative Commons Attribution-Share Alike 3.0 Unported License.
Based on a work from this source