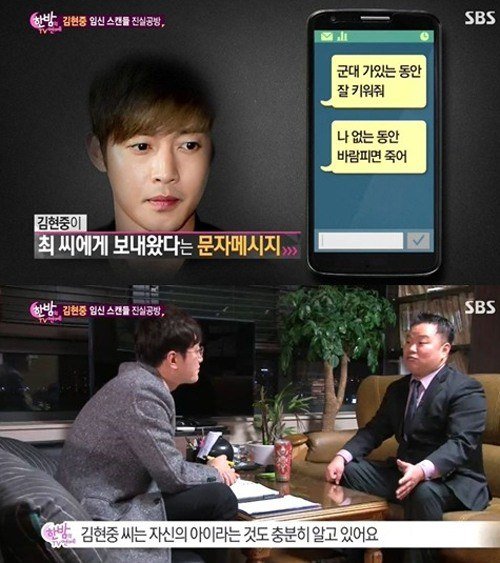 Ex-girlfriend 'A', who claims to be pregnant with Kim Hyun-joong's baby, released her official statement through Dispatch.

Dispatch released text messages from between the two people on the 25th.

According to what was released, Kim Hyun-joong texted 'A', "I'm upset. I can't be happy about this but this is all just upsetting", proving that he wasn't suspicious of her pregnancy.

In addition, on the day of the assault trial, Kim Hyun-joong texted her saying, "I want to rearrange what I want to say and get back together with you", "I'm sure a day when we can't contact each other will come but until then, don't ignore my calls". Then Kim Hyun-joong completely changed and said, "You live the way you live. This is my last".

After Kim found out about 'A's pregnancy, he said, "I want to live for our baby. Let's forget everything and start fresh. I'll make you happy, married" and "Take care of our baby while I'm in the military".

Kim Hyun-joong then asked 'A' to 'write a petition and I'll marry you'. 'A' asked what he meant and he said, "If I get fined, that's a red line on my list. Your husband is going to get a red line. I'll get better for the sake of our baby. Let's start over and I'll make you happy".

'A' also went through conflict with Kim's father regarding the pregnancy and hospital issues. She'd been in contact this whole time with them, showing them ultrasonic pictures of the baby and such.

What 'A' released happened to be completely different from what Key East released earlier this week.

"Interview with Kim Hyun-joong's girlfriend, conflict with Kim's father"
by HanCinema is licensed under a Creative Commons Attribution-Share Alike 3.0 Unported License.
Based on a work from this source