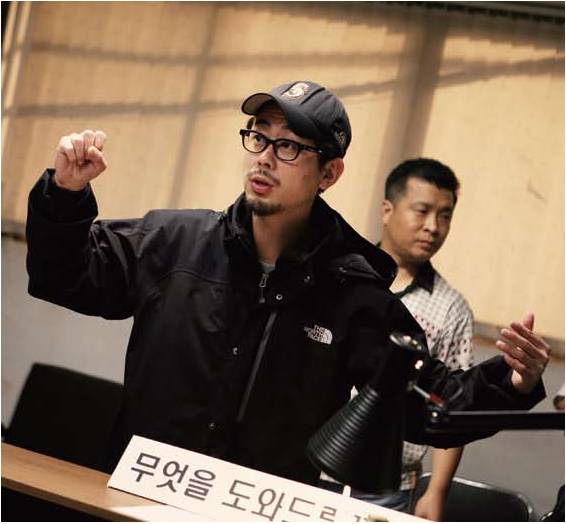 You started to prepare the production of "The Yellow Sea" right after "The Chaser".

I was thinking of having a rest for a while, but one of my seniors told me, "keep working, you are young". So, I felt to do something. But, I didn't have a special interest in the matter of Yanbian or the ethnic Koreans. Using A Murderer as its working title and as a research process went on, I realized the atmosphere and reality of the society over there.

What was your first impression on Yanbian? How did you research about the ethnic Koreans?

I just picked up a backpack and went to Yanbian by train. And then I lived there for 2 months. I had to sit long in a stifle train to get there, like the scene Gu-nam sleeping in a train to Dalian, during the long travel, I was able to feel something an overall mood or emotion. And I was more surprised upon arriving Yanbian, because I imagined something "yellowish" like "The Yellow Sea", but it was grayish all over the city. But it seemed to make me more interesting. I begun to listen to ordinary people there, they looked to me at the first time, as we met more often and drink together, they begun to open and told me many stories.

How was the production in China?

In fact, the portion of the scenes shot in Yanbian is not that much in the film. Due to an unexpected situation, we moved to Qiqihar, 2 hours from Harbin, to shoot the most of the scenes. There are many ethnic Koreans living in the city too, the city has more decorations and a more cinematic feeling like noir than Yanbian.

While preparing "The Yellow Sea" , were there any images or instant strong impressions you felt or that captured you?

I was captivated by the eating scenes. I think all basic instincts come from a matter of eating after all. For example, the scene while long waiting for the crucial moment, Gu-nam goes to a convenient store to eat a cup noodle, the scene when he devours kimchi from the refrigerator after starving a couple of days, and the scene where Myun and his team eat beef. Those eating scenes still remain fresh in my mind.

How Gu-nam ended up in the Southern city of Korea, Ulsan, from China remains unexplained?

From the scene Myun steps into the hotel room naked, with a violent expression.

I wanted to make that scene something odd by combining a viewpoint shot with a third point of view. I wanted to change the entire tone of the film from that scene, like a flash moment that changes the track, and replaces it with another emotion by getting removing reality from the film. It looks a little too excessive, but I must have the scene to explain the nature of Myun character. I wanted to make the scene like one from an old samurai film or yakuza film. I was told the scene reminds people of 2001: Space Odyssey when Myun picks up a bone, instead of an axe.

It looks like there were many different styles in the action sequences?

I worked with Yoo Sang-seob, a martial art director from the Seoul Action School, once again after "The Chaser" . his contribution to "The Yellow Sea" was huge, so a third component of this film was YOO's.

While working on "The Yellow Sea" , did you ever think you would do what you didn't do or finish from "The Chaser" ?

Never, it's like an already finished game. I rather thought that I'd never repeat what I did in "The Chaser" . The actors are the same, Ha Jung-woo, Kim Yun-seok, but I thought there was no similarity between the two movies. And I thought that I only needed to focus on "The Yellow Sea" itself.

"Interview with NA Hong-jin"
by HanCinema is licensed under a Creative Commons Attribution-Share Alike 3.0 Unported License.
Based on a work from this source