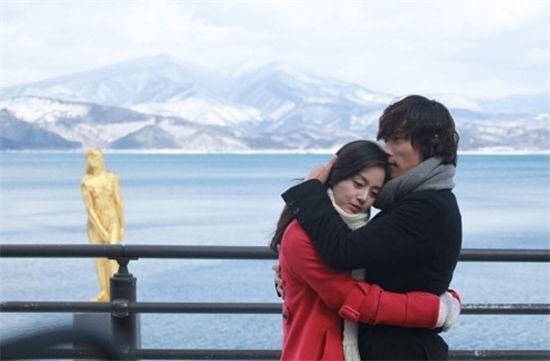 TV series "IRIS", which made headlines prior to its airing for being assigned a prime time, 9 p.m. slot on TBS, has finally started conquering Japan. TBS, which had been involved with "IRIS" since its early planning stages, appears to be putting all its energy into promoting the series. The show's lead actors, Lee Byung-hun and Kim Tae-hee, visited Japan together prior to its premiere on April 21 and appeared on various variety shows on TBS over the next couple of days. The two stars made so many TV appearances that you could see them almost every time you turned on the television set. On April 20, the day before the premiere, they appeared on a popular TV show hosted by noted emcee Shimada Shinsuke and handpicked voice actors for the supporting roles in the Japanese-dubbed version of "IRIS". Four veteran Japanese celebrities competed to win the part of Captain Jung, the boss for Lee Byung-hun's character, and comedian Moody Katsuyama ended up taking the role. In addition, promotional posters of "IRIS" was plastered in every part of the city including Shinjuku, Shibuya and Omotesando and Lee's fans exchanged information thru fan websites on the whereabouts of the posters so that they could take pictures. TBS also set up a Twitter account to promote "IRIS", delivering news about the show on a real-time basis. 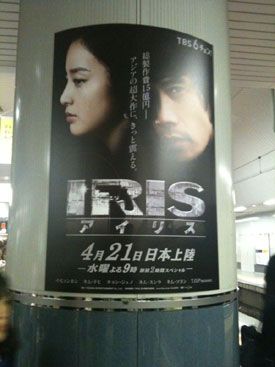 A promotion poster of "IRIS" in Japan

The line-up of actors who provided voice-overs for the Japanese-dubbed version of "IRIS" is quite fancy. Actor Fujiwara Tatsuya, known to Korean fans for his lead role in the film "Death Note", played the main character Hyun-joon, originally portrayed by Lee Byung-hun. Kim Tae-hee's character Seung-hee was voiced by actress Kuroki Meisa who gained popularity after appearing in dramas such as "Ninkyo Helper" and "Haikei, Chichiue-sama". Fujiwara Tatsuya has said, "I was under a strong impression that Hallyu dramas were usually melodramas that female viewers empathize with, but "IRIS" has a story that can attract male viewers as well". He also confessed that he is "so into the drama that [he] forgets about reading the script". At the press conference held in Japan on April 18, Lee explained that the show "received a lot of love in Korea. I have very high hopes for the drama and am curious what kind of response it will receive in Japan because the culture is different and people express their emotions differently".

Thanks to such heavy promotion, "IRIS" recorded a 10.1 percent viewership rating for its special premiere episode which aired for two hours on April 21. According to an official in the Japanese TV broadcasting industry, TBS had an average viewership rating of around 5 percent during the given time slot. It is quite a strong start, considering that the figure was the highest among all the TV programs that aired on TBS that day. Riding high on the momentum, TBS re-aired the premiere episode on April 28, at 1:55 p.m., before the second episode was broadcast and is planning to run a special feature titled "IRIS Exclusive Close-up Special 2010" on May 14. A huge promotion event, featuring the main cast including Lee Byung-hun and Kim Tae-hee as well as popular idol group Big Bang, will be held in Osaka on May 26 and in Saitama Super Arena on June 1. From May 21 thru June 6, there will be an "IRIS Exhibition" held at the Roppongi Hills Tokyo City View. Rumor has it that props and wardrobe from the drama shootings will be featured in the exhibit, and cafes and bars will turn into "IRIS"-style venues. Looks like it will only be a matter of time until the famous "candy kiss scene" will capture the hearts of Japanese fans.