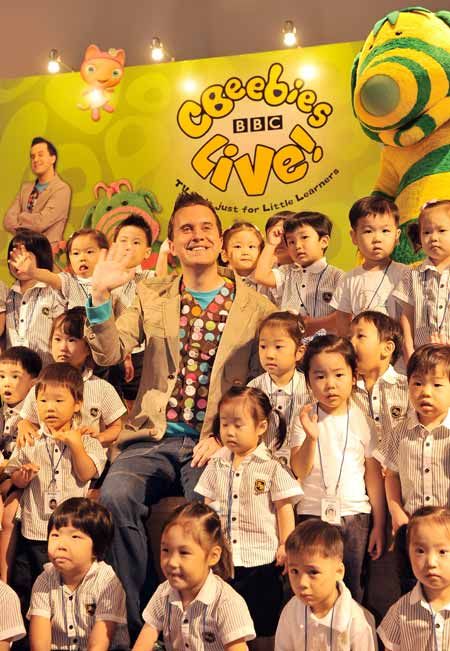 For four-year-old preschooler Park Sang-lin, watching television is not as exciting as it used to be.

"She loves television, but it's hard to find something that fits her age and needs. Local programs tend to be a bit boring for her, so she watches cartoons or other children's programs made overseas", Min So-ra, Park's mother, told The Korea Times.

Local channels are failing to satisfy children's needs. Some networks simply air cartoons while others broadcast out-of-date shows. What will it take for local networks to come up with fun, colorful and educational programs fit for the younger crowd?

Before the Internet explosion, children's television programs were quite popular in Korea. Many preschoolers and young children started their days watching popular shows such as "Ppo Ppo Ppo" (MBC) or "Ding Dong Deng Kindergarten" (EBS) learning songs, the Korean alphabet and arts and craft, but nowadays, it's hard to find original and creative shows on public television. Even local cable channels targeting children, including JEI TV and Daekyo Children's TV, mostly offer cartoons from both here and abroad.

Out of the 10 children's programs airing on KBS, seven of them are cartoons and among those four are from abroad. Fellow networks MBC and SBS are also similar, with only about an hour mainly focused on children's shows per day.

According to a survey conducted by children's program festival Prix Jeunesse Foundation last June, Korea rated only 6 percent in producing domestic programs for children, marking one of the lowest among Asian countries. There were only six other countries that were rated under 6 percent, including Singapore with 1, Malaysia, 3 and Brunei with none. Japan marked 97 percent, while China also made almost 90 percent of their shows.

EBS is better off than its counterparts, where children's shows make up 21 percent out of their entire programming, but experts point out it's not enough.

"Children's programs are extremely important as they shape character and input knowledge at a very young age. But making and producing them is becoming more and more difficult", a producer from the Preschool Education division at EBS told The Korea Times.

Other media outlets including the Internet and cable channels may have changed the roadmap for major networks, but the unique characteristics of such shows are hard to ignore.

"Children's programs are about waiting. It takes a day or two for dramas to stir viewers, but it takes more time for youngsters to understand the concept and actually enjoy it. Networks need immediate feedback to discuss future programming, funding and advertisement, but local networks don't have the luxury or time to wait. That's the reality", he said.

A fellow producer at MBC also expressed the difficulty in making shows for children, as it "takes time and effort to combine computer graphics, music, choreography and a lot of memorizing. It takes much more time than making a drama".

While local broadcasts struggle to attract both children and funding through television, experts suggest that they should also tune in to other media outlets and formats for ideas and encouragement.

Checking on the websites for local children's channels may turn out to be disappointing. Most of the sites offer a brief introduction of the show and its characters, recaps of the original program, screensavers and information on the airing schedules. Very few sites include interactive or fun games for children, which could be a good way to create a connection between the viewer and the program.

"It would be nice if the homepages of popular children's shows could include more fun and interesting games and other features. We usually just find them through different sites, which I think is a waste of time", Min added.

Multi-use is an important facet networks and production companies must keep in mind, as it not only saves time and effort, but it can also help children to get familiar with the program easily.

"We always try to have a great range and variety of characters and production styles on the channel. Kids love animation but they also love to see real people, for instance live action programs and (hosts) like Mister Maker. You have to have that kind of variety", BBC programmer Ryan Shiotani said during an interview with The Korea Times last week.

The BBC's CBeebies channel was recently launched in Korea through KT's IPTV service QOOK TV, and will be airing some of its most popular programs for children, including "In The Night Garden", "Waybuloo" and "Charlie and Lola".

To celebrate its launch, the channel held a special event at the KT Olleh Square last week, inviting children and parents to experience firsthand what the channel will be about.

"It's just another way to bring CBeebies alive", the programmer said.

The event was indeed a colorful one, with characters from popular shows including Mister Maker and Fimbles, roaming around the venue, taking photos and making arts and crafts. The storytelling and yoga sessions were also popular among kids, as it made them feel like they were actually on the show, complete with matching outfits, music and favorite characters.

"We always try to look for programs that are multi-platformed. We really look for things that can be translated not only to television, but also online and offline. We look for concepts that can live across platforms", Shiotani said.

Such experiments and strategies may help local channels to attract more viewers, and further acknowledge the importance of the quality and quantities of children's shows.

"Preschoolers and children are in a very special stage where development is very important. We need to understand and respect their needs, but it seems like networks are neglecting their roles. Local networks should look back and check if they are doing their jobs properly in satisfying public interest", The Children's Media Cultural Act, also known as YEYE, wrote in a report July.
_________________________
Mister Maker, center, host of popular children's show "Mister Maker" on the CBeebies channel, joins Korean children at a special inaugural event last week at KT Olleh Square. The channel is running through KT's IPTV service, QOOK TV. / Korea Times photo by Shim Hyun-chul

"Is local TV neglecting younger crowd?"
by HanCinema is licensed under a Creative Commons Attribution-Share Alike 3.0 Unported License.
Based on a work from this source