It's the shows that matter, not the channels 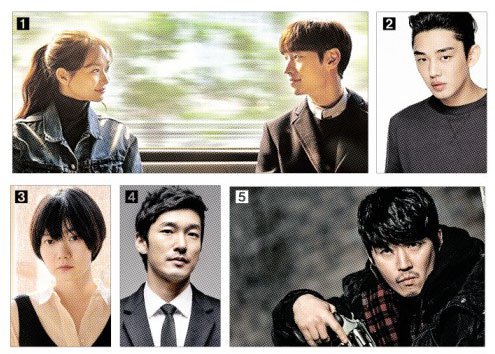 Many top stars have been changing to the cable lanes in 2017. Just a few years ago, it wasn't a common thing as every single step was made into an issue. Celebrities used to follow star writers onto cable but now they are looking just at the masterpiece itself. Successful dramas like the tvN "Goblin" and "Answer Me 1988" have accelerated the potential of cable dramas. tvN drama "Tomorrow With You" is Shin Min-ah's first cable drama. She is popular for her roles in "My Girlfriend is a Gumiho" and "Arang and the Magistrate", but her recent drama "Oh My Venus" wasn't too successful although she dressed up as an overweight person. This time she is a whacky character and her co-star Lee Je-hoon also chose to come back with tvN after last year's signal.

Jang Hyuk approached OCN for the first time with the drama "Voice". He didn't do so well in the KBS 2TV drama "The Merchant: Gaekju 2015" and "Beautiful Mind" last year, but this time he's back with the role of a detective. Jang Hyuk, Kim Woo-bin and Kim Yoo-jung's management claims that one benefit of cable dramas is that it surpasses the limit in element when compared with ground-wave dramas. The actors realize that it's not the channel that matters but how convincing their characters are in a drama.

Bae Doona and Cho Seung-woo are coming back with "Secret Forest". It is a thriller about a prosecutor and a policewoman digging through internal corruption and finding the real criminal. Choi Jin-hyuk who has just come out fresh from the army, is coming back with OCN drama "Tunnel - Drama".

The reason stars continue on to cable is because they want to be evaluated for their performance alone and not just compete. They think cable has overcome ground-wave in terms of variety of elements and quality. In ground-wave, if the percentage is low, it looks as though the actor or actress has failed but in cable, they tend to be evaluated for their true talents. The absorption of new material is quick on cable and the lower age average of the production team also helps with quick decision making.

"It's the shows that matter, not the channels"
by HanCinema is licensed under a Creative Commons Attribution-Share Alike 3.0 Unported License.
Based on a work from this source