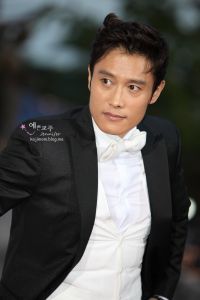 While many would consider chiseled model-like features a blessing, such features to an actor can be a curse.

The stereotype against such actors often limits the variety of scripts that come their way.

However, Lee Byung-hun, over his 13 years in show business has displayed many different facets, proving that he is more than just another looker. Earlier this year, Lee was recognized for his charismatic portrayal as a gangster with the Best Actor Award at the 42nd Paeksang Arts Awards.

Lee is now awaiting the release of his new movie, "Once in a Summer (Kuhae Yorum)", a melodrama that focuses on the romance that blossoms between two innocent people in the summer of 1969.

In the upcoming film, Lee plays Yoon Suk-young, a college student who finds love during a summer stay at a farm with his classmates. Soo Ae is cast opposite Lee in the role of Suh Jung-in, a sweet librarian who captures Yoon's heart.

While this isn't Lee's first time playing a clean-cut college student (he played one in 2001's "Bungee Jumping on Their Own") nor is this the first time he has done a period piece (he played a teacher at a countryside school in 1999's "The Harmonium in my Memory"), he said that this role will be very different from his previous works.

"It is the duty of an actor to present new facets not reprise roles", he said at a news conference last month along with the film's co-stars and director.

Lee, who was born in Seoul on July 12, 1970, was discovered at an annual talent search organized by the Korean Broadcasting Company (KBS) while he was an undergraduate studying French literature at Hanyang University in Seoul. After his debut in the title role of the miniseries "Asphalt My Hometown", Lee went on to do more television work as well as movies.


In 2000 Lee also starred in director Park Chan-wook's critically acclaimed debut film "JSA - Joint Security Area", a depiction of friendship between South and North Korean soldiers serving at the Demilitarized Zone.
His most recent dramas include "Happy Together" in 2000, "Beautiful Days" in 2001 and All In in 2003.

He also shared the screen with some of the biggest names in "hallyu" or Korean wave _ "Happy Together" featured Jun Ji-hyun, "Beautiful Days" featured Choi Ji-woo and All In featured Song Hye-kyo, it was only a matter of time that Lee would also join the troop of hallyu stars.

The airing of "Beautiful Days" in Japan in 2002 was the start of it all. The presence of Choi Ji-woo, who was already well known for "Winter Sonata", the drama generally considered to have really set the entire Asian continent on hallyu fire gathered interest in the drama and also got Japanese fans wondering who the actor cast opposite Choi was.

However, it was after Lee did All In, in which he portrayed a multi-faceted gambler that he shot to superstar status across Asia.

Today Lee Byung-hun has fan clubs in Japan, China and all over Southeast Asia. His Japanese fans even refer to him affectionately as Byunsama. The "sama" in Byunsama is an honorific title in Japanese.

All In was an important piece to Lee in another sense.

Months of rumors circulated that Lee and co-star Song Hye-kyo's on-screen chemistry was translating to an off-screen romance. While the drama was airing in early 2003 the two confirmed that the rumors were true and they were an item. Lee, well known to keep a low profile shocked fans when he and fellow co-star of the drama All In announced that they were officially an item.

However, like many celebrity romances theirs lasted just short of a year. The two are reported to have parted because of conflicting views on marriage.

For fans wondering if a "Once in a Summer" on-screen romance is materializing into an off-line romance, apparently their relationship is nowhere near being anything romantic.

"We worked together for four straight months and hardly even spoke (laugh). Now our relationship has developed to a point where we greet each other in passing", Lee told reporters.

"Once in a Summer" opens in theaters nationwide on Nov. 30.

"It's Time for 'Byunsama'"
by HanCinema is licensed under a Creative Commons Attribution-Share Alike 3.0 Unported License.
Based on a work from this source