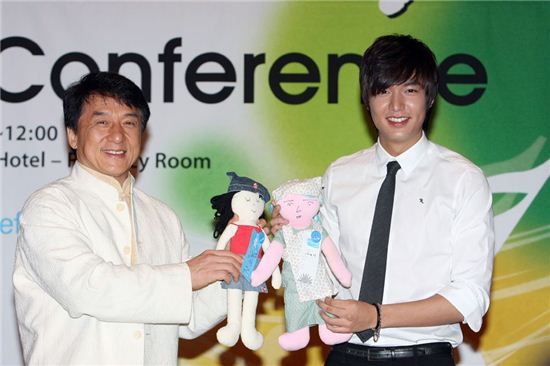 Hong Kong star Jackie Chan has been appointed honorary chairman of the 2010 Asia Song Festival (ASF) which brings together top artists from around the region to Korea every year.

The 56-year-old actor, director and producer showed up at The Grand Hyatt hotel in Seoul yesterday, attending the commissioning ceremony for the event to be hosted jointly by Korea Foundation for International Culture Exchange (KOFICE), the Seoul Metropolitan Government and UNICEF Korea.

Jackie Chan has long been known for his charity work including serving as a Goodwill Ambassador for the UNICEF for several years now and running his own charity foundation.

Korean actor Lee Min-ho, Goodwill Ambassador for Korea's UNICEF, also turned up at the ceremony, promising to promote the festival as a way of spreading the values of hope and sharing.

Numerous top singers from around Asia have taken part in the ASF so far such as Korea's Super Junior, Big Bang and Girl's Generation, Japan's Backt and mihimaru GT, China's Chris Lee and Taiwan's Show Luo at last year's fest.

The event will be held as Asia's one and only international charity concert hosted jointly with the UNICEF as well as being an official cultural event held in celebration of the G20 summit to be held in Korea in November.

All proceeds from online sales of UNICEF's charity doll AWOO and funds raised from the concert will be donated to children in flood-stricken areas in Pakistan.

The 7th ASF will take place at the Olympic Park in Seoul on October 23 and be attended by 15 teams of artists from seven countries around Asia.

"Jackie Chan appointed honorary chair of Asia Song Festival"
by HanCinema is licensed under a Creative Commons Attribution-Share Alike 3.0 Unported License.
Based on a work from this source