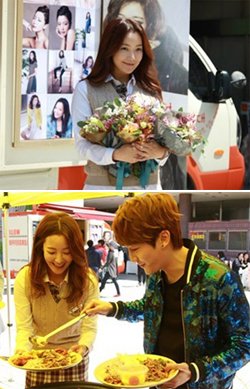 Chan and Kim have been close friends since they co-starred in the 2005 Hong Kong martial-arts film "The Myth".

Kim wanted Chan to make a cameo appearance in the drama "Angry Mom", but the tight filming schedule made it difficult, so Chan came up with the idea of treating the staff to a meal as a way of encouraging them.

In the drama, which deals with school violence, Kim plays a single mom who dropped out of high school.

"Jackie Chan Offers Big Feast for Kim Hee-sun"
by HanCinema is licensed under a Creative Commons Attribution-Share Alike 3.0 Unported License.
Based on a work from this source