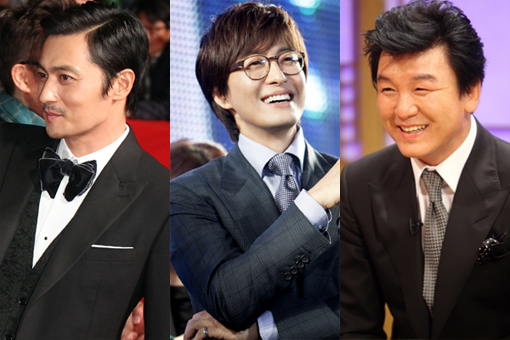 Possible of returning to screens in 11 years

'Return of the kings?'

The names of top stars returning to the entertainment biz has everyone heated up.

Bae Yong-joon, who had no after projects since "Dream High", might have been offered a role in a drama coming next year. There have been many speculations that he might come back with "Dream High 2". However, this time there is detailed talk about this drama which is worth 15 billion won with star directors and celebrities.

Bae Yong-joon's management Key East chairman Yang Geun-hwan told Sports Dong A on the 24th, "There are no details yet but if the drama is good then he plans on coming back next year".

Jang Dong-gun, who has been off screens for the past 11 years might be coming back to home screens. He was offered a role in popular writer Kim Eun-sook's new SBS drama "A Gentleman's Dignity". According to a certain official, this drama is planned on airing next year and the writer wrote it with Jang Dong-gun in mind.

His management AM Entertainment said, "He was offered the role in the drama and left to China for a movie shoot. He is currently focusing on the movie and when it's over around December, he will go through the offers again".

Joo Byeong-jin has been talked about coming back from before and there are rumors that he will start being active this fall in an MBC talk show. This talk show is known to be dispatched on a Thursday, therefore overlapping with Yoo Jae-suk's KBS 2TV "Happy Together 3".

Joo Byeong-jin was overlooking to comeback with MBC FM4U "Date at Two" but there were many talks about switching with Yoon Do-hyun so he just gave up the position.

"Jang Dong-gun, Bae Yong-joon and Joo Byeong-jin 'return of the kings'"
by HanCinema is licensed under a Creative Commons Attribution-Share Alike 3.0 Unported License.
Based on a work from this source