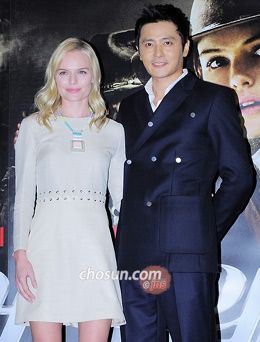 Jang Dong-gun's Hollywood debut "The Warrior's Way" is set to hit the theaters at home and abroad next week. The 39-year-old actor discussed his feelings about the film after a preview in Seoul on Monday.

"It was my third time acting in a foreign language following '2009 Lost Memories' (2001) in Japanese and "The Promise" (2006)' in Chinese", said Jang, who performed in English in the film. "But the language wasn't as big a challenge for me as proving myself to U.S. moviegoers to whom I'm just an unknown actor".

"The Warrior's Way" is a Korea-U.S. joint venture produced by Lee Joo-ik, who also made "A Battle of Wits" (2006) and "Late Autumn - 2010"",and Barrie Osborne, a Hollywood producer famous for "The Lord of the Rings" trilogy.

It also stars Kate Bosworth, who played Superman's lover in "Superman Returns" (2006), and Geoffrey Rush from the "Pirates of the Caribbean" series.

In the mixture of Hollywood Western and Asian martial arts film, Jang plays Yang, a warrior assassin who seeks to live an ordinary life in the U.S. Wild West, but is forced to take up his sword again in order to protect his lover. It opens in Korea on Dec. 2 and in the U.S. the following day. 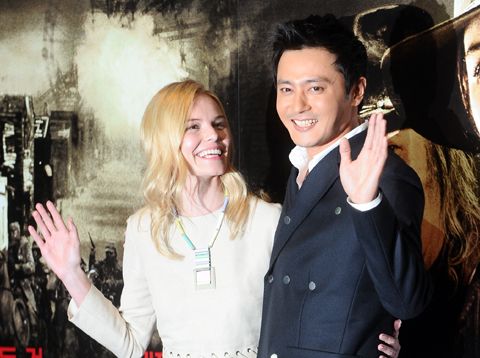 "Jang Dong-gun Hopes to Impress U.S Moviegoers in Hollywood Debut"
by HanCinema is licensed under a Creative Commons Attribution-Share Alike 3.0 Unported License.
Based on a work from this source