Jang Dong-gun, Jun Ji-hyun and Song Hye-kyo get together on the Cannes red carpet 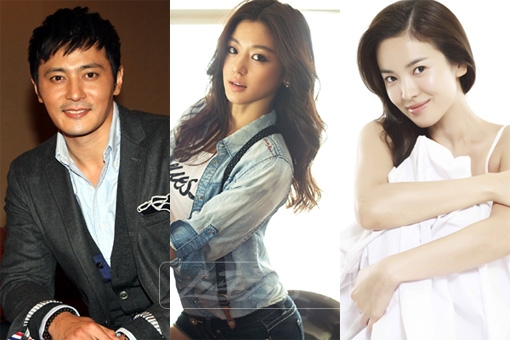 At the 64th France Cannes Film Festival, there will be a fancier party of Korean Celebes this year.

Jang Dong-gun and Jun Ji-hyun present their recent project before the global movie makers and Song Hye-kyo have a better possibility of stepping on the red carpet with their main movies.

Being held in France on the 11th of May, The French International Cannes Film Festival is a movies award event that has a special relationship with Korean movies and actors. It also looks like the relationships between directors Im Kwon-taek, Lee Chang-dong and Park Chan-wook, actress Jeon Do-yeon and more will continue again this year.

It is being foreseen a mass variety of movies and top stars will attend this event this year. Low cost movies and even billion won block busters.

The star being focused most on is Jang Dong-gun. He will attend the awards with fellow actor Joe Ogagiri in his recent movie "My Way". There will be a movie presentation during the Cannes Awards with the international press as target.

Directed by Kang Jae-gyu, "My Way" is about the lives of Korean soldiers during the Second World War.

The Chinese-American co-produced movie by Jun Ji-hyun "Snow Flower and the Secret Fan" (directed by Wayne Wang) is planning a promotion during the Cannes movie festival. Not having a special relationship with the awards so far, Jun Ji-hyun sets forward to let her movie be known this year with "Snow Flower and the Secret Fan". Other than that, Yoon Kye-sang, Kim Gyu-ri, Yu Jun-sang and Kim Sang-kyung also might attend the awards according to their movie entrees.

Produced by Lee Jeong-hyang and led by Song Hye-kyo, movie "A Reason to Live" and "Poongsan" (directed Juhn Jai-hong) with Yoon Kye-sang and Kim Gyu-ri as the leada are also waiting for results of their movie entrée in the awards to come out in the middle of this month.

"Jang Dong-gun, Jun Ji-hyun and Song Hye-kyo get together on the Cannes red carpet"
by HanCinema is licensed under a Creative Commons Attribution-Share Alike 3.0 Unported License.
Based on a work from this source