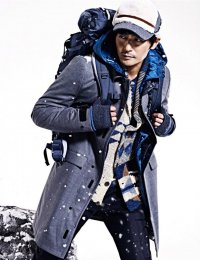 "Not only does Jang have a perfectly chiseled face, but he is also well-known to be a highly diligent and focused professional. He possesses a sexy, masculine appeal that fits our product image", said Hera's brand manager Choi Deok-su in a statement.

Jang will be featured from December. The photo shoots took place in New Zealand, according to Jang's management agency Star M, because he is currently shooting his latest film "Laundry Warrior" ("The Warrior's Way") there. He stars opposite Kate Bosworth in the action flick, which went into production earlier this month. It will be Jang's Hollywood debut.

Jang has previously modeled for Korean make-up brand Missha with international pop star BoA. The actor has starred in some of Korea's highest grossing films such as "Taegukgi: Brothers of War" and "Friend". He is also a hallyu megastar who is much loved for his roles in TV dramas such as "All About Eve".