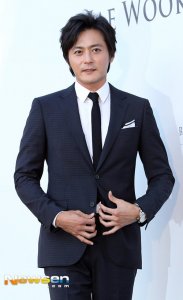 Korean leading man Jang Dong-gun will team-up with Kate Bosworth and Geoffrey Rush in New Zealand in November to shoot the international project "Laundry Warrior" ("The Warrior's Way"). JANG will portray a warrior on the run who encounters an alcoholic (Rush) and a beautiful woman with a secret, played by Bosworth.

Writer/director Sngmoo Lee (Sngmoo Lee)'s fantasy action film starts shooting on November 12 and the project is in the hands of producer Barrie Osborne who was also onboard of The Lord of the Rings trilogy. Laundry Warrior is Lee's feature film directorial debut.

Korean special effect houses will collaborate with the famed New Zealand Weta Digital in post-production. KMI and Lee Joo-ik will handle the distribution rights of the film in Korea and Japan, interest in the film is reportedly high.

"Jang Dong-gun Opposite Kate Bosworth and Geoffrey Rush"
by HanCinema is licensed under a Creative Commons Attribution-Share Alike 3.0 Unported License.
Based on a work from this source