Jang Dong-gun to return with drama in twelve years 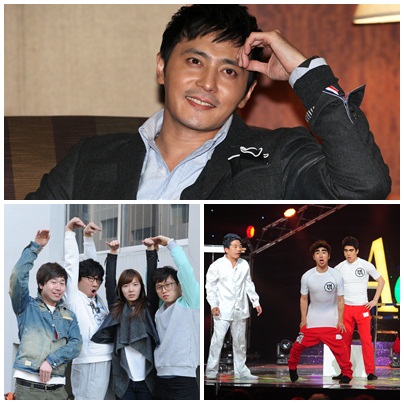 Top star Jang Dong-gun (40) has met his rival with his return of a drama. It's not about a competing drama. It's because of the KBS2 TV program, "Gag Concert" which overlaps by 40 minutes.

Jang Dong-gun is starring in the new SBS weekend drama "A Gentleman's Dignity" starting from the 26th of May. This is the first drama he's coming back with since 12 years ago drama "All About Eve". He is joining forces with writer Kim Eun-sook and producer Sin Woo-cheol who created big this like "Secret Garden" and "City Hall".

However, ""A Gentleman's Dignity" has run into the rocks.

The drama department is in worries right now. "Gag Concert" is a popular TV program with an average of 20% and more in viewing rate. There are many sections in he TV program that are very popular. A manager laughed, "Everyone is concerned about Sunday because of "Gag Concert". Also, the percentage for the drama isn't going to be easy to settle down with since the comedy program is the 'it' thing nowadays".

Starred by Jang Dong-gun and Kim Ha-neul, "A Gentleman's Dignity" is the love story of middle aged people.

"Jang Dong-gun to return with drama in twelve years "
by HanCinema is licensed under a Creative Commons Attribution-Share Alike 3.0 Unported License.
Based on a work from this source